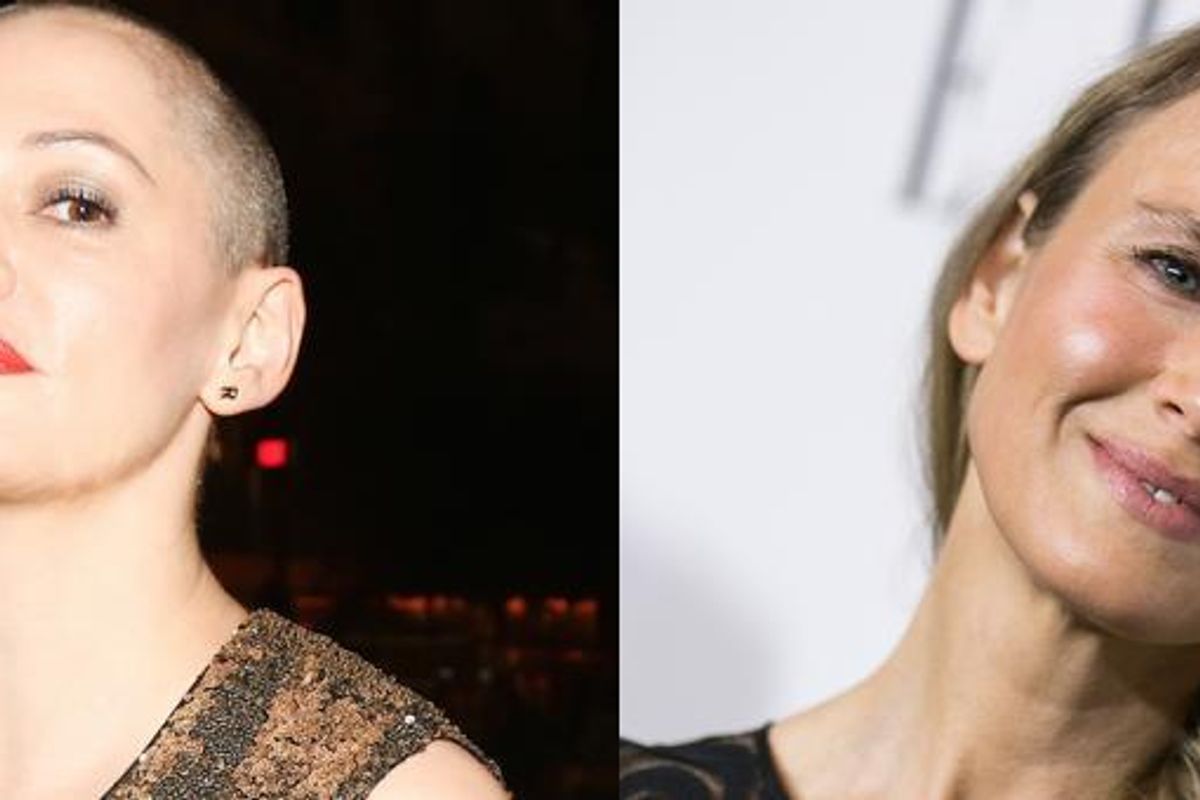 McGowan, who's become a pariah of sorts for standing up to the unfair standards for women in Hollywood, called out Gleiberman for perpetuating our culture's disdain for aging women, punishing Zellweger, whose only crime is "getting older."

The Oscar-winner's appearance as been the source of much scrutiny since her appearance at the Oscars 2 years ago, after spending a significant amount of time out of the spotlight.

McGowan's full letter is below:

"Renee Zellweger is a human being, with feelings, with a life, with love and with triumphs and struggles, just like the rest of us. How dare you use her as a punching bag in your mistaken attempt to make a mark at your new job. How dare you bully a woman who has done nothing but try to entertain people like you. Her crime, according to you, is growing older in a way you don't approve of. Who are you to approve of anything? What you are doing is vile, damaging, stupid and cruel. It also reeks of status quo white-male privilege. So assured are you in your place in the firmament that is Hollywood, you felt it was OK to do this. And your editors at Variety felt this was more than OK to run.

You are an active endorser of what is tantamount to harassment and abuse of actresses and women. I speak as someone who was abused by Hollywood and by people like you in the media, but I'm a different breed, one they didn't count on. I refuse and reject this bullshit on behalf of those who feel they can't speak. I am someone who was forced by a studio to go on Howard Stern where he asked me to show him my labia while my grinning male and female publicists stood to the side and did nothing to protect me. I am someone who has withstood death threats from fanboys, had fat sites devoted to me. I've withstood harassment on a level you can't comprehend, Owen.

I was so confused by the heaping tons of abuse, I actually forgot what I looked like. Which is awesome because I rose up from some serious ashes to finally have my say. Here's some truth: Men like you and the women who sit idly by and say nothing should know that aiding and abetting is a moral crime, and if it were punished in Hollywood, most of you would be in some form of jail.

Any studio that Renee Zellweger has made money for, any co-star she's supported or anyone who takes a percentage of her income should be doing what's right; they should be calling this harassment out.

As a woman who has been bullied for years by a vicious pack of lower beings, I can relate to this. Many are probably silent because they do not wish for the proverbial pen to be pointed at them; I say point away. Short of killing me, you can't possibly do more than what was done to me in my tenure as an actress. I don't care if you're afraid. Be brave. Do what's right, for once. I loathe fear. And this town is built on fear. Fear was instilled in me by the men and women of this town, just as I'm sure it was instilled in Ms. Zellweger. Fear of being blacklisted, fear of being branded difficult, fear of ... fear of ... fear of.

Well, guess what, Owen? I am not afraid of you or anyone. It is a small, small, myopic, self-fellating town that loves to love itself. I am here to ask you all to put the mirror down and look out at society, because whether you're aware of it or not, you too are part of society and by retreating to the standard go-to — silence — you are hurting all of us. Look at what you're doing and where you bear responsibility and culpability. Who are you all protecting and why? Who are you helping and why?

To illustrate what women in the public eye go through ad nauseam, I have replaced Renee Zellweger's name in your article with those of male actors.

The movie's star, LEONARDO DICAPRIO, already had his "Did he or didn't he?" moment back in 2014, and I had followed the round-the-world scrutinizing of his image that went along with it, but this was different. Watching the trailer, I didn't stare at the actor and think: He doesn't look like LEONARDO DICAPRIO. I thought: He doesn't look like JAY GATSBY!

In the case of MATT DAMON, it may look to a great many people like something more than an elaborate makeup job has taken place, but we can't say for sure. What we can say is that if that happened, it reflects something indescribably sad about our culture. For in addition to being a great actor, DAMON as much or more than any star of his era, has been a poster guy for the notion that each and every one of us is beautiful in just the way God made us.

"You complete me" is one of the great lines in modern romantic movies because of the way it takes its inner meaning from who TOM CRUISE is. This is what completes you: someone who looks just like this. What completes you is reality.

RYAN GOSLING had won the lottery, had been plucked from semi-obscurity by the movie gods (or, actually, by the daring of Cameron Crowe), but not because it was so unusual to see a non-famous actor starring in a major movie.

He worked with costars who reinforced his supernova status, through their fame or their beauty or both. ROB LOWE, with pillowy cheeks and quizzically pursed lips and that singular squint, was beautiful, but not in the way that a BRAD PITT or GEORGE CLOONEY was.

JOHNNY DEPP was no flash in the pan, but after 'Edward Scissorhands', he struggled to find roles that could complete him. It wasn't until 'Pirates of the Carribean,' five years later, that he hit his stride by finding a role that jelled with his image as an extraordinary ordinary guy.

A spirit reflected, at least in the first two movies, in the slightly slovenly doughy-cuddly perfection of ANSEL ELGORT's face. Yes, he gained weight for the role, but the added weight was still him. I'm one of the few critics who loved even the second film (the ANSEL-goes-to-Thai-prison plot might have seemed absurd, except that ELGORT grounded it), and the third chapter is long overdue. I just hope it turns out to be a movie that stars ANSEL ELGORT rather than a victim of Invasion of the Face Snatchers.

Owen, the last line in your article, "I hope it turns out to be a movie about a gloriously ordinary person rather than someone who looks like she no longer wants to be who she is" is quite the mind f---.

Guess what? It is time to stop f---ing with women's minds.

Do you know what my interests are, Owen?

My interests are bigger than pondering a stranger's face. My interest is destroying the status quo. My interest as a card-carrying member of society is to STOP the brainwashing Hollywood and the media have for too long gotten away with. The brainwashing that you have long been a friend to and a supporter of.

You, Owen Gleiberman, are not they.

You are simply a bully on semi-glossy paper."

BOW DOWN TO ROSE McG!