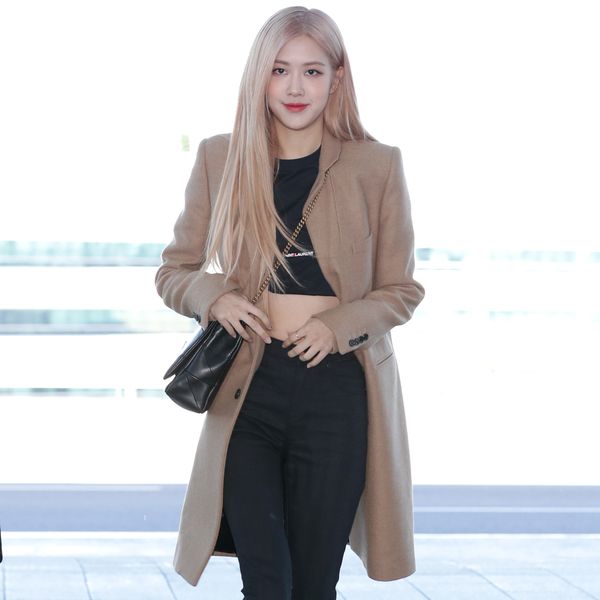 #ROSÉxSaintLaurent started trending worldwide on Twitter as soon as Rosé revealed she would be flying to Paris to attend the Saint Laurent show. Today, the BLACKPINK member was spotted at the French brand's Summer 2020 show, which was held in its usual outdoor venue with the Eiffel Tower visible in the background.

Despite the rainy weather, the show went on as planned with rows of strobe lights illuminating the night sky. Rosé, who was wearing a sharp-shouldered, double-breasted black coat dress from the French brand, quickly found her front row seat amidst the flurry of guests and photographers. She was guided by an escort who held an umbrella for her as looked for her spot.

Rosé previously revealed two days ago via Instagram that she was headed to Paris for the YSL show. She was spotted leaving Incheon airport in South Korea before catching her flight (where she was also wearing head-to-toe Saint Laurent). The K-Pop star also uploaded an instagram story of herself at her hotel, with a card signed by Saint Laurent Creative Director Anthony Vaccarello, who welcomed her to Paris.

She's not the only BLACKPINK member to make an appearance at a fashion show this month. Jisoo was spotted in London a few days ago in the front row of the Burberry runway show, where she sat alongside other celebrities such as Dua Lipa and Rosalia.