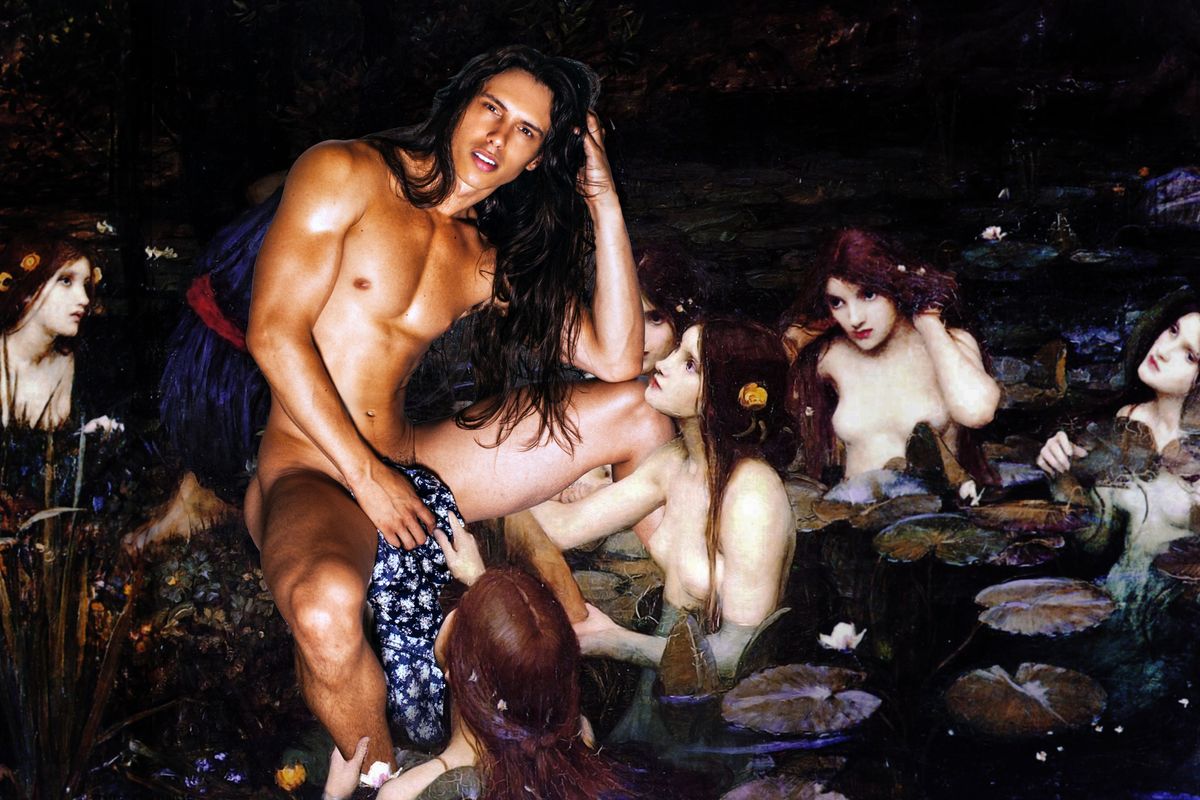 Walking through the Eckhaus Latta looks and fumbling skateboard bros outside Clandestino, flashing neon lights spill from a side street. Around the corner, crowds form in front of a performer wearing jeans with the ass cut out and long, curly hair that could easily front any L'Oreal campaign. "I'm fun to fuck," he sings above glittery synth production, swaying his hips seductively before two giant video monitors. "Make me feel alive, fuck me 'til I die, choke me 'til I cry..." Neighbors in the surrounding apartments begin opening their windows and letting out screams of delight.

It's Roman Darkholme, the unapologetically queer pop star, Reba superfan and a beloved bartender at New York's local dive, Bar 169. And this is his pandemic pop show, Thirst Trap Live.

"The show was going to premiere at the end of March 2020, but then the pandemic happened," Darkholme says. "I was depressed because of all the normal global pandemic reasons, but also because I had designed my dream show to be performed indoors, and that was now impossible. Then I was inspired by seeing drag queens, comics and musicians, who were finding ways to keep performing in a post-COVID world. I went back to the drawing board and rebuilt my rig so that I could perform outside."

Thirst Trap Live became his lightning-speed, pop-up performance that lasts approximately 15-20 minutes, and features all of Darkholme's original songs and videos. He custom built a portable stage, with lights, visuals and projections all synced to live music — like if Britney Spears' Vegas residency was shrunken down, and designed to be hauled on the subway and stored inside a studio apartment. "I want my show to look like if Lady Gaga was poor and on public access," Darkholme says.

"I wanted my music and video work to exist in the real world, not just on social media," Darkholme explains. "To make Thirst Trap happen I started DIY teaching myself on YouTube and online forums. I learned how to do show design, DMX lighting, metal fabrication, how to build-out the custom VJ software and video design templates, then married these skills with my music and video animation. I built a one-of-a-kind system. Now I can program everything and perform independently. Learning all this allowed me to create a show with no gatekeepers — a show that totally represents me as an artist: Fun, heartfelt and horny."

In addition to "Fun to Fuck," a NSFW song where Darkholme promises he "can make you feel like you were in the movies," the independent artist has a growing discography of x-rated bops. There's "Touch," with its chorus of melodic, orgasmic moans and "Slowly," where Darkholme asks a lover to take his time. "I make music for gay people to have sex to," the artist says, which makes performing them live on the streets of New York City all the more strange and exciting. (He also brings the set to private residences, including a recent Brooklyn rooftop where viewers grilled burgers as Darkholme sang about gang bangs while dressed in a Spiderman suit.)

"I make music for gay people to have sex to."

"I created my music, my video and my show all on a waitress' salary," Darkholme says. "I've never been signed, represented or financially backed. I didn't go to school for this and I didnt know anyone in the business. No one ever said 'yes' to me, so I decided to say 'yes' to myself. Thirst Trap Live exists because I say 'yes' to my dreams every day."