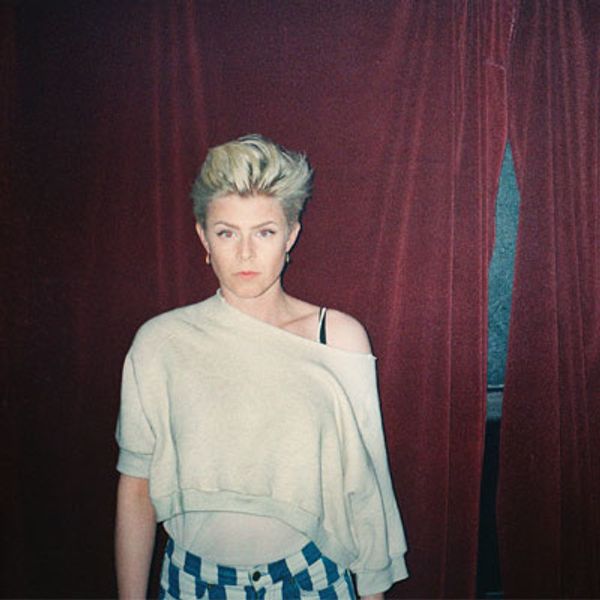 About two years ago, the very weird and very fun music video for an indie electro-pop song called "Konichiwa Bitches," by the pintsized Swedish singer Robyn, went viral online and likely drove a lot of people straight to Wikipedia. Could the woman singing in this bizarre video — in which, at various points, she boxes with a kangaroo, dons a bumblebee costume and emulates Porky Pig — possibly be that Robyn? The same one responsible for bubblegum-pop confections "Show Me Love" and "Do You Know (What It Takes)" 10 years earlier?

Yes and no. Technically, today's Robyn is the same person who once vied with Britney and Mandy for MTV airplay. But she's reinvented herself so thoroughly that you'd never know it from the sound of her 2005 self-titled record or her recently released album, Body Talk Pt 1, out on her own Konichiwa Records. (Robyn split with Jive Records in 2004 after they reacted poorly to her new sound, which she has said was inspired by electronic acts like the Knife). This Robyn is playful and fierce, collaborates with Röyksopp and Diplo and proclaims her independence at every turn — the opening track on Body Talk Pt 1 is a tongue-in-cheek song called "Don't Fucking Tell Me What To Do." It's a far cry from the cleanscrubbed, Max Martin-approved 16-year-old she was (or at least appeared to be) in the '90s.

"I wouldn't say I regret it at all, but I wouldn't do it again, either," Robyn says of those days. "It led me to the point where I felt like I figured myself out and understood what I wanted to do... to be happy as an artist." She chooses instead to focus on the present and future, and with good reason: Body Talk Pt 1 is the first of three albums she's planning to release this year. "It's kind of an experiment," she says. "I'm just trying to mix it up a little bit and make it so that I have more time in the studio and more time on the road together, and not just do one thing for a couple of years and then change and do the other thing for a couple of years."

It's understandable that Robyn would want to shake things up. She spent five years on tour promoting Robyn; since it was independently released, buzz about the album built slowly, and it wasn't until 2008 that anyone outside Sweden really caught on. All that touring gave Robyn a real taste of global club culture, which ultimately seeped into and influenced her new record. "I made a club album," she says simply. "The concept of a club being an important place for our generation — almost like a church or a place where we go to experience something that's bigger than ourselves — has been a great inspiration."

One of the most refreshing elements of the new Robyn is how genuinely empowering her music is. And, happily, the self-assured badassery of some of Robyn's catchiest tracks, like "Handle Me" and "Cobrastyle," is back in full force on Body Talk Pt 1. Robyn says it's personal, rather than partisan: "I'm a feminist for sure, but I don't see myself as a political artist," she says. "I think that what I do reflects me and my life, and maybe that's where that comes in."

"The concept of a club being an important place for our generation — almost like a church or a place where we go to experience something that's bigger than ourselves — has been a great inspiration."

At least some of this casual self-confidence can be traced to Robyn's childhood as the daughter of parents who helmed an independent theater group. "We were on the road a lot, and... I was totally an eccentric kid and a bit of a Pippi Longstocking." Her parents' theatricality also had an effect on Robyn's rather eccentric personal style (if bike shorts come back into fashion, we're going to credit Robyn's April performance of "Fembot" on the Swedish talk show Skavlan). "I was around people who dressed up for work every day, and so the concept of how you can use clothes to change your personality or communicate who you are is very interesting to me," she says.

There's also a strongly intimate, almost confessional aspect to Robyn's songs — particularly on the new album, which features a lovely, vulnerable ballad called "Hang With Me" — so it's a little surprising how reticent she is about her personal life. "There's a little bit of me in all the songs on the album," she says, careful not to divulge too much. "But life is too complicated to describe with one song."

Birds of a Feather

Robyn is part of the grand tradition of bird-named musicians (A Flock of Seagulls, the Eagles, the Byrds, etc.). Here are some other avian-themed bands to fly away with...

Grizzly Bear singer/guitarist Daniel Rossen's side-project Department of Eagles came to the forefront in 2008 with the lush In Ear Park. Rossen actually formed the band prior to joining Grizzly Bear (with his NYU freshman roommate Fred Nicolaus). An album of earlier tracks, Archive 2003-2006, is out July 20th.

This hard-rock super-group (comprised of the Foo Fighters' Dave Grohl, Queens of the Stone Age's Josh Homme and Led Zeppelin's John Paul Jones) released a debut album in November that's just as epic and amazing as you'd imagine. They're touring overseas this summer, with stops in Norway, France and Japan.

The Bird and the Bee

This L.A. jazz-pop duo comprised of Inara George ("The Bird") and Greg Kurstin ("The Bee") did something a bit different on their third album: They reinterpreted nine classic Hall & Oates songs. The band plays the Hollywood Bowl on July 18th.

Known around the indie rock watercooler as one of the most talented yet least productive bands making music these days, the New Jersey natives who released The Meadowlands back in 2003 have officially begun a follow-up, tentatively titled Funeral, that'll tentatively (but hopefully) be out this fall.