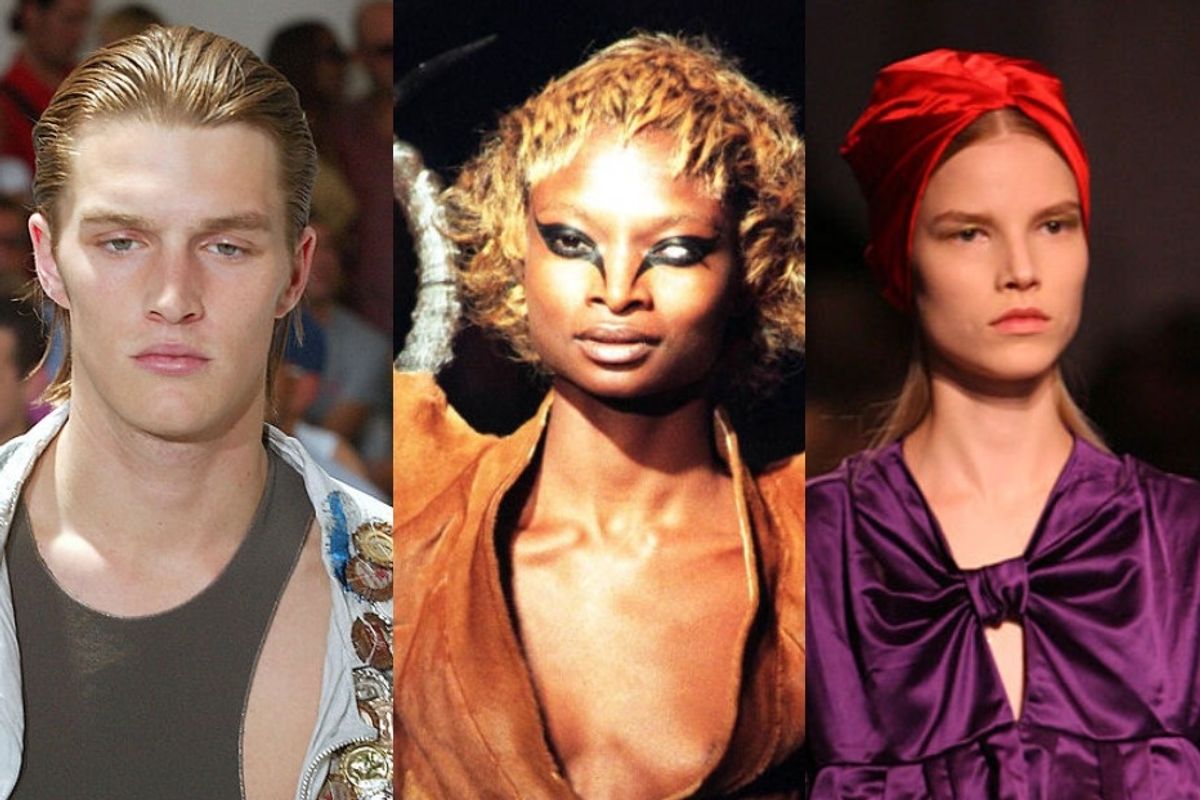 "Have Creative Directors Become Bigger Than the Brands They Work For?" HighSnobiety asked in 2015. The answer was yes then and remains even more staggeringly so, as fashion remains a rip roaring game of musical chairs. Just look at 2020 for proof: Raf Simons appointed co-creative director of Prada in February 2020; Clare Waight Keller out at Givenchy in April, replaced by Matthew Williams in June. The fashion industry has some serious commitment issues when it comes to trusting who to put in the driver's seat, especially for fear that the designer may drive the car off road. Or, in some cases, that's exactly what's desired. Still, some crave the old.

And thanks to some creative minds on Instagram, the work of past creative directors and their undying influence on a brand's legacy and trajectory are getting the flowers they deserve. These archival accounts both celebrate a fashion house's former iterations while sometimes (inadvertently?) drawing into focus how much some have deviated from the aesthetic paradigms they were built upon.

According to Justin Friedman, who curates and runs the IG account @tomfordforgucci celebrating Ford's tenure from 1994-2004, the fast churn of creative directors say more about the state of fashion as a whole than anything else going on in the industry. "We're in a moment when people very rarely know or care about the personality of a house or brand, let alone the creative director behind it," he says. "These days people just want a logo tee, a signature bag and a branded sneaker that'll play well in an IG post, so it doesn't really matter who the creative director is because that creative director is obligated to churn out the same products that every other creative director is producing. Luxury fashion has essentially become fast fashion at a much higher price point."

As Friedman pointedly asks in his account's bio: "If it wasn't by Tom Ford, is it even Gucci?" The account features striking images of a Gucci no longer recognizable under the tenure of Alessandro Michele. Sexed up images of models Georgina Grenville and Jason Fedele from a Spring 1997 campaign feel foreign to Gucci's latest campaign which stars… horses. The account almost serves to frame Gucci under Ford's tenure as a relic of the past rather than a bygone iteration of something that exists in the present.

Friedman's account is one among many, including @diorinthe2000s, @oldceline, @helmut_lang_archives and @mcqueen_vault. Prada is so beloved, it's got two archival accounts: @prada.archive and @oldprada. Both draw on past runways as well as campaign imagery and related editorial content to celebrate fashion history.

Related | The Black in Fashion Council Has Entered the Chat

"I have always had a huge appreciation for Prada and after hearing the recent changes, I felt it was the proper time to study the past," says Trevor Houston, a New York-based shoe designer who started @oldprada in February during a lazy Saturday morning spent looking through a book about the label. "It was then that I realized that fashion used to demand much more emotions from the viewer." He created the account as a way to capture not just nostalgia, but the power of Miuccia Prada's ability to storytell through design. As a firm believer that the past informs the future, Houston sees his work as part of painting a more rounded out portrait of Prada by counterbalancing its current output with its past.

Like Friedman, Houston too has trepidation about the constant turnover of creative directors within the industry. Even his beloved Prada, stalwart in keeping the house a family affair for 87 years, has seen a shift in power. "I feel as though I have been told many stories without an ending. It shows being a creative person in today's climate is extremely difficult and the pressures of business weigh heavy. The importance of the creative seems to have shifted to the merchandiser."

In the case of Alexander McQueen, that importance never wavered during his nearly three decades at the helm of his namesake label before his death in 2010. John Matheson, who runs the Instagram account @mcqueenvault, began worshipping at the altar of fashion and in particular Lee McQueen, at a young age, going to great lengths in small town Tennessee and South Carolina to see, learn and collect as much fashion content as he could accumulate. "We may not have been high spending clients at that age, but we were no less intensely die hard loyalists," he says of him and his peers. "These collections started to accumulate fast, and zoom forward thirty odd years, I had a lot of media collected from magazines, photographs, and video that needed purifying and organizing, which is what lead to the Instagram page." A page that has grown to over 107K followers and counting since its very first post in August 2018.

Matheson didn't set out with any sort of plan in terms of how big or time-consuming of a project @mcqueenvault would be: "In terms of the duration of this project, I can always find something new about McQueen. His world is fathoms deep." Still, he admits, the feed takes time, nothing that a single post can take as long as three hours to curate, amass the necessary assets both visual and text, and post. "I'm determined to preserve as much of his legacy on any scale I can manage, but it takes resources and money to do so," he says." "It's also bizarre given the current climate of hoovering up every vintage designer piece that can be found to then turn and flog it just for the money or even worse, for the designs to be used to make copies under the guise of 'research.' Legacy rarely wins if money can be made, but thankfully I have met more people out there who also want to preserve these items and history."

For some, the continued relevancy and inspiration of a particular designer's tenure at a brand serves as inspiration to keep their legacy alive. "I think most of it has to do with the longevity of Phoebe Philo's designs — they all had so much life in them; there's nothing else quite like it," says Gabrielle Boucinha, who started @oldceline weeks before Hedi Slimane's tenure at the brand began. "[Phoebe's] pieces were so simple, but so brilliant… nothing but everything. The simplicity was so powerful. I can't speak for everyone, but for me her pieces, her ethos, and decade of iconic design, are everlasting."

From Boucinha's perspective, today's consumer will follow and support a designer they admire regardless of the brand or house they are at. "The consumer connects with the designer on a more personal level where it is about them as a designer and not the brand or house they might currently be at," she says. "Still, I think it becomes much more memorable when a creative director stays with a brand for many years to really marry their own identity with the identity of the brand — to fuse them both together." Such has not been the case for designers like Raf Simons (who joined Dior in 2012 and exited in 2015), Hedi Slimane (who joined Yves Saint Laurent in 2012 and exited in 2016) and Clare Waight Keller (who joined Givenchy in 2017 and exited in 2020). Jonathan Saunders managed just 18 months at Diane Von Furstenberg from 2016 to 2017, while Bouchra Jarrar lasted only fifteen months at Lanvin from 2015 to 2017.

And while accounts like these are largely intended as a celebration of the past, some experts have mixed feelings about the effort given the transient nature of the medium. "It's great because it can be a great educational tool, it makes history accessible and inspiring, but I also feel like it can take away some of the reverence of those iconic moments in fashion that deserve your full attention instead of a like on Instagram and continuous scrolling," says Amanda Murray, a creative consultant. "It's almost like eating fast food — two hours later, you're still hungry. Taking in those moments should satiate you, it should make you stop and leave you thinking about what went into creating that moment and how does it make you feel. It can take away some of that emotion because we see and absorb so much on Instagram."

Still, it cannot be denied the impact these accounts have collectively had on introducing a new generation to a new POV on a brand or house they might love, or one they've never even heard of. It also serves to amplify the notion that a campaign is not just about selling clothing, but an art piece and an artifact of time unto itself perhaps intended for recirculation years or even decades later.

Was Lee McQueen likely imagining a world in which his past runway shows would be archived and redistributed on a platform like Instagram where young fashion disciples all over the world could double tap while scrolling through a feed chock full of thirst traps and Housewives memes? For anyone who knows anything about McQueen, the answer is invariably yes. And that's the point.