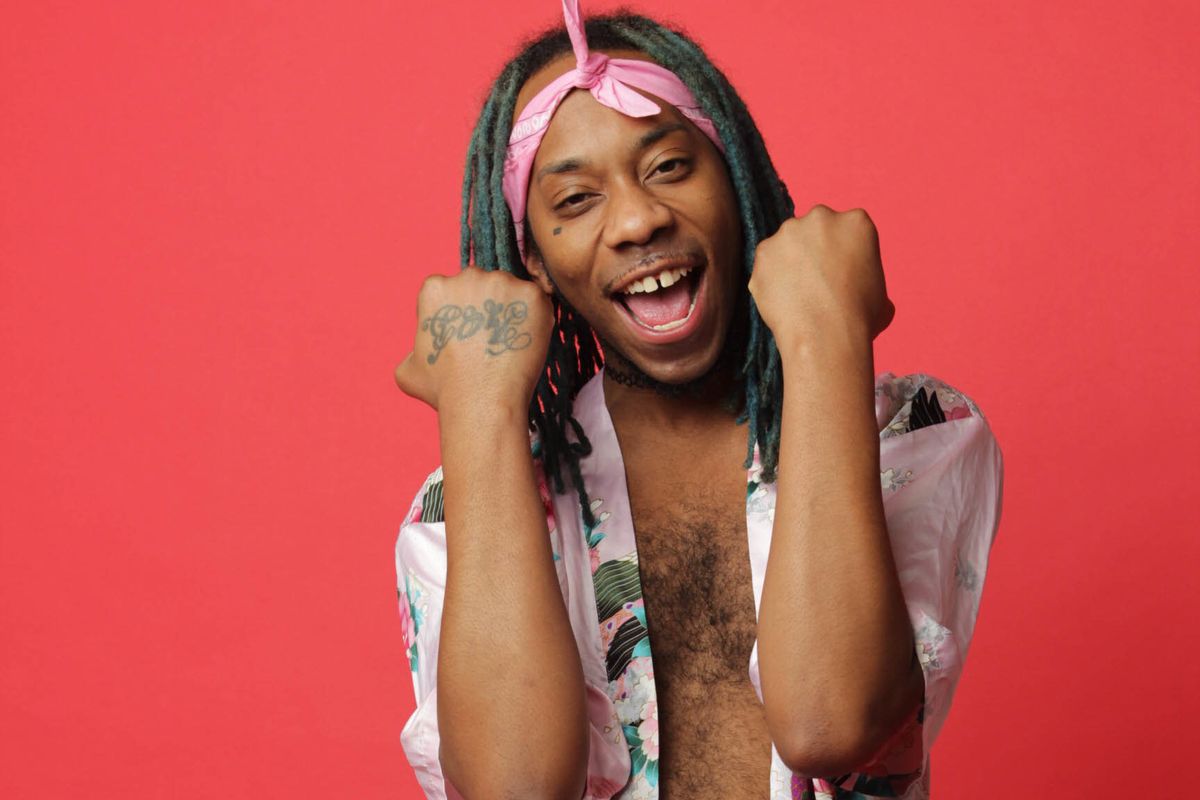 Bounce Around With Atlanta Rapper Ripparachie

Atlanta trap music has emerged victorious on the radio and charts in recent years, however, few gay male artists have been able to stake their claim in such an explosive industry. New artist after new artist emerges, while gay artists usually get shoved into the background of the scene, but after taking a long break from music, LGBTQ+ rapper Ripparachie is back and ready to fill that void.

The Indiana-born artist found mild success several years ago with his SoundCloud hits like "Twerk Like Ashton," but eventually faded out from the music scene. After catching an itch to return, in addition to encouragement from his family and collaborators, Ripparachie began making music again this past June. He came back with a thumping, new sound; his new tracks are still turn-up anthems, but each drop has been more confident than the previous.

His newest music video for "Bouncing" is a psychedelic, color-changing trip through Hollywood, and despite following a new sound direction with more low-key vocals, it's a slapper. You might find yourself twerking and shaking for absolutely no reason at all, and that's exactly what he wants. With smooth bars and support from some of Atlanta's best producers and brightest stars, like Father and Lord Narf of Awful Records, it looks like Ripparachie is back and here to stay.

Read Ripparachie's interview with PAPER below, and watch the music video for his new track, "Bouncing."

I like the scene a lot. I just now got back into doing music, last June, around that time. My life has changed here because it's open, and I like trap music, so it's for me. I've always liked the music, because I'm not from Atlanta, I'm from Indiana, actually. I moved here to pursue music. I used to travel here a lot, and then I thought, "Why not live there?" So I moved here and then ended up stopping music and I was canvassing for two years and in that time I was raising money for the Human Rights Campaign. I just got back into music, and it seems accepting, more open than the midwest.

What caused your break from music?

It was internal, actually. I feel like I wasn't who I am now. I wasn't as strong as I am now, but obviously it had to do with the scene. Things were clique-ish. It's all about that. I was out here with rappers I used to look up to and honor and I wouldn't even mention that I rap. I would be at their crib or whatever and I wouldn't even mention I rap, nothing. I gave up on it, and it was sad because my brother, who I mention in a lot of my music, he was fighting cancer when I had moved to Atlanta. He used to be trying to push me every day to get back into the music. He's fighting cancer, he'd be in the bed FaceTiming me. I was like, "No." I didn't care about it anymore, but now I'm back on it, I do it for my brother and my queer folks.

Your sound has changed a little bit, like in "Bouncing," and a couple of your other newer songs post-break. How did you come up with that new sound?

The new sound basically is just from being in Atlanta streets, really. I said I was canvassing, so I was really in Atlanta streets heavy for gay rights. So I was trying to be a force for queer people, basically, and that's why I kept doing that. Atlanta is the gay mecca of the south, if you ask me. My sound has really changed a lot from just being here in Atlanta and being in the streets. I didn't know anybody around me up until then, I only knew my engineer and his boyfriend. Coming here to a whole new city and having people being homophobic about stuff in the city taught me to be a more tough of a person.

So are you thinking of making more songs like "Bouncing" that have that trap-heavy feel? I even heard you were featured on a dubstep song, "Revolutionaire." What sounds are you interested in exploring?

That's the hard part, because I can do a lot of different stuff. I'm inspired by a lot of different artists as well, a lot of different producers. Of course trap will always be my home-sound. Before I came out of the closet, it was trap music. When I came out of the closet that's when I tried to change from being a negative person into being a positive person. When I came to Atlanta, that's when I realized that I can still be myself and rap like I want to and be gay, so that's when I started doing more trap music again. For the sounds that are in the future, I've been working with people that play rock, I have this alternative rock track coming. If I can rap to it, I'm going to rap to it. I like music that's going to be turnt up, I want to turn up every stage, I want to turn up every city and just be that voice.

I saw you perform with Lord Narf, what kind of performances do you want to do in the future?

She's one of the main reasons why I got back into music. She puts a lot into me, she puts me on stage. That's how I've been performing a lot, when she has a show I perform with her and when I have a show she performs with me, and that's how it's going to be. We're working on a project called Team Rocket because we're always together, every day. Yeah, I want to do more shows, I like doing shows. I just got back into music last year and in that time I've performed more than I have in my life and I've been performing since I was 14! My first show was opening up for Too $hort. I've been performing this whole time, but I'm just now realizing, "OK. I can do this for real." Especially with Awful Records, they've really been keeping me focused. I have a track with Father coming soon, too.

You've got two of the Awful Records crew by your side, that's awesome.

Definitely, everybody has different sounds sounds, too — like Abra, me and her are about to start working on stuff, too.

What gets me hype? I really don't get inspired by other rappers. I mainly listen to R&B or the most ratchet music. Just something to dance to. I love R&B, I like anything that's like that.

You can hear some of that R&B inspiration in those kicks and drums of "Bouncing."

When I recorded that song, it sounds like I'm quiet on there, but actually I recorded it at six in the morning and the neighbors were knocking on the wall and stuff. So I was recording, "Bouncing off the molly, I'm in Holly going crazy," and it was basically inspired by when I got back into doing music, and when I was in LA. I think that was around the time when I was doing the video with Candy Ken. So when I was out there I was like, "Oh, this is my shot," and then once I realized people were out there I like, artists and stuff, I was like, "Oh wait this place is crazy." I was out there going crazy. Everything on that track is inspired by being in Cali. I was there a lot. All of the video was shot in Cali, which was crazy.

Were those your friends I saw on the video?

I had just met them that day! I was out there going crazy, I told you. I had just met everybody that day. Father had me out there for his video, we had shot two videos, one with Abra and then I was in one of his videos. I did the "Bouncing" video last minute, my friend was like "Do you want a bouncy house?" I was like, "I don't care, if you order it, if you go ahead and make the calls then I'll pay for it." Then we went right there and shot that video, all that day, it was a crazy day.