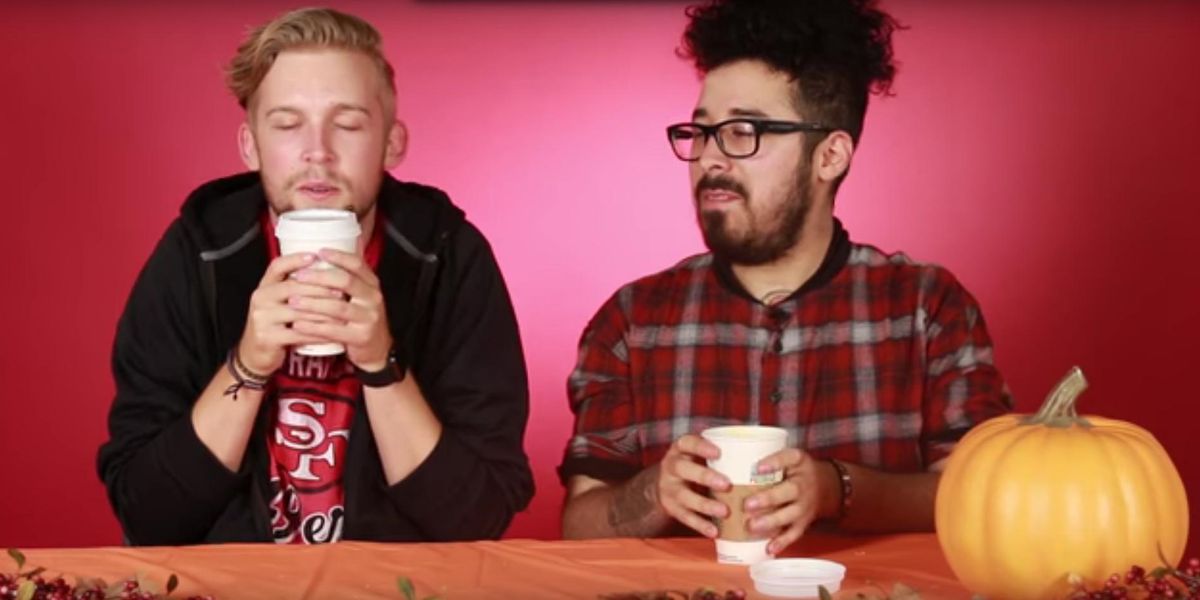 Are we seriously still making fun of people for liking pumpkin spice?

Even though we find ourselves in 2015 -- a full 365+ days after pumpkin spice latte jokes and the phenomenon of the "basic bitch" reared its head on the internet (and we all know a year on the internet is the equivalent of 10,000 years) -- we can't seem to let go of literally the most tired, covert misogyny rib out there. Like, it's evident that the Internet is still happily subscribing to the weird narrative that the only people stupid enough to spend $5 on pumpkin spice lattes are vapid, oblivious, privileged white girls, as they literally steal the same limp-dick of a joke from Twitter over and over and over again to criticize women for being unimaginative, uncultured dummies who just wanna drink coffee that tastes like a Glade plug-in.

If you say "pumpkin spice latte" in the mirror 3 times a white girl in yoga pants will appear & tell you all her favorite things about fall.
— female struggles (@omgfuncomedy) November 20, 2015

If you say "pumpkin spice latte" 3 times in the mirror A white girl in yoga pants will appear and tell you her favorite things about fall
— Not Kevin (@KG_Toomuchhands) November 11, 2015

If you say "pumpkin spice latte" in the mirror 3 times, a white girl in yoga pants will appear and tell you her favorite things about fall.
— Peter Shankman (@petershankman) September 18, 2015

Legend has it saying "pumpkin spice latte" 3 times fast into a mirror will make a white girl appear in front of you
— Adrien Castillo (@LifeAdviceLime) October 27, 2015

In Autumn, if you say Pumpkin Spice Latte 3 times in front of a mirror at midnight a white girl in yoga pants will emerge.
— Alex Benecki (@NachoGuac) October 25, 2015

if you say "pumpkin spice latte" in the mirror 3 times a white girl in yoga pants will appear & tell you all her favorite things about fall
— Bitch Problems (@FemaleTexts) September 9, 2015

Usually this shit doesn't irk me, but the other day my friend ordered a PSL as a Friday dessert treat and some asshole who didn't even know her was like "LOL, you would." Combine this with FOX's hit teen horror spoof Scream Queens recently dedicating a good 5 minutes to a tired PSL joke and a Buzzfeed video where they make a "basic" joke every 10 seconds, and, honestly, you have to scream once and for all, "How is this still a thing???"

wow a new Adele album during pumpkin spice ugg season what a time to be a white person.
— Elijah Daniel (@aguywithnolife) November 20, 2015

Someone spilled a pumpkin spice latte and now a bunch of ants are making brunch plans and doing yoga.
— Swedish Canary (@SwedishCanary) November 18, 2015

Like, I get it, you hate it, it's too sweet, it tastes gross, whatever. And of course there's something inherently fake and gimmicky about the idea of "pumpkin spice" since a) there is no pumpkin in it and b) it's really nothing more than corporate marketing meant to evoke the holidays, but, shit man, so is Halloween candy and I'd like to see all of you nobly pass by your work's "For Everyone" because you think trick-or-treating is a capitalist lie. Don't forget you participate in novel capitalistic systems everyday, Mr. I Preordered-Bacon-Covered Sausages From Applegate Farms for Thanksgiving. Plus, there's a real scientific reason people love pumpkin spice; because it makes your dick hard! Don't pretend like you're exempt!

Kudos to the white woman (relevant) behind me at Starbucks: "I'd like a *deep sigh* venti pumpkin spice latteI'MSORRYIJUSTREALLYLIKETHEM."
— Big Badger (@socratic) November 20, 2015

Mostly though, pumpkin-spice hate is dumb because it's just yet another example of the sort of everyday, casual misogyny that's inherently ingrained in our culture -- a fact that's further emphasized by the surprising number of young girls tweeting these above jokes or thinking they have to preface a tweet about pumpkin spice with a "I'm sorry! I know I'm basic!" Why after all this discourse is it still a perennially popular joke to hate on everything girls like from boy bands to food items? And why are we continually shaming these girls for liking something as arbitrary as a flavored beverage? Girl, don't apologize for liking what you like! Order that PSL! Don't let stupid people shame you into thinking you're a terrible person because you like the extremely likable taste of cinnamon and nutmeg together!

I always feel the need to apologize after ordering a pumpkin spice latte. Like, I'm sorry I'm so basic but I need this right now.
— Chrissy Costanza (@ChrissyCostanza) September 18, 2015

Anyway, I hereby declare Pumpkin Spice jokes to be passé, so let's just fucking kill these lame AF jokes about basic bitches that stopped being funny forever ago . Hope you dicks still making videos about PSLs have fun drinking whiskey out of your steak in the meantime.