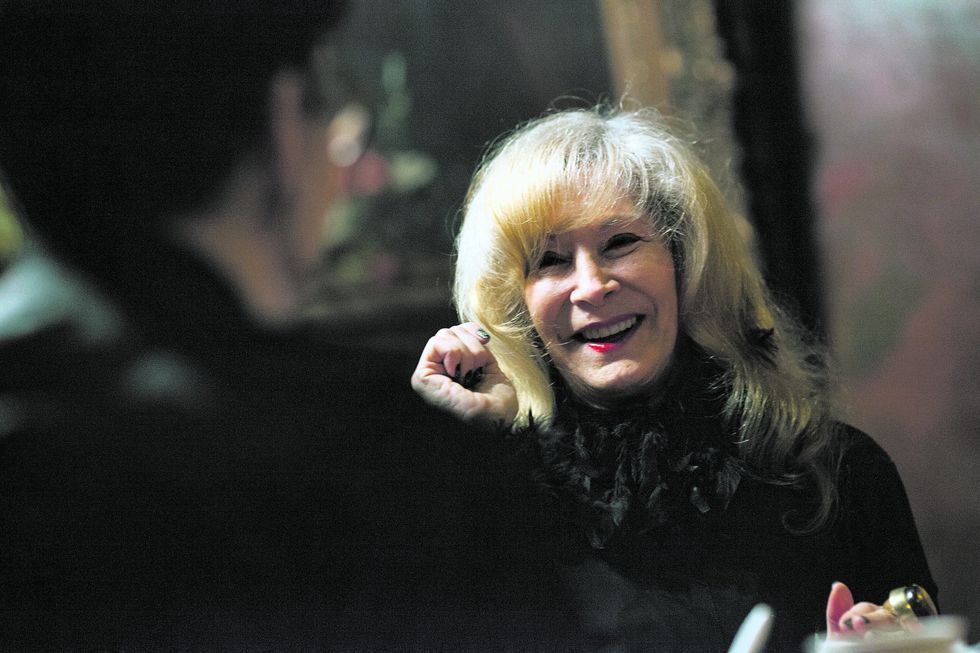 Anita Sarko. [Photo by Patrick McMullan/PatrickMcMullan.com]
The outpouring of love that exploded when I Facebooked about Anita Sarko's suicide the other day was so astounding, I bet it would have saved her life if she'd been around to witness it. The truth is, Anita had been a ground-breaking DJ and feisty writer (including for Paper back in the day), but in the last few years, she was having trouble finding creative work and felt a bit hopeless and forgotten.

I first noticed her at the Mudd Club, a late '70s New Wave hangout, where she ruled as a rare female DJ, one with the guts to play whatever she wanted. I actually was convinced she was a transsexual, with her striking looks and sultry voice! (Eventually, I realized she wasn't. I'm much more savvy today, I swear.) By time she was the DJ/host at the '80s megaclub Palladium -- spinning in the Mike Todd Room, a mural-laden VIP area in which she was basically one of the art pieces -- I got to know her and all her intricacies and was drawn to her smarts and talent.

She'd booked my cover band at Rock Lounge, showing a burgeoning entrepreneurial side, and, with Haoui Montaug, organized and hosted the freewheeling No Entiendes revues at Danceteria, where upstarts like Karen Finley, Madonna and the Beastie Boys performed in between the hosts ranting, bantering, and playing party games. She and Haoui also introduced karaoke to America, where it's now integral to any bar worth its salted margaritas.

But it was in the '90s that Anita really soared. Major designers like Marc Jacobs and Vivienne Westwood knew she was the cool catch and booked her to DJ their shows in New York and Europe, which she filled with imports, offbeat mixes, and surprising oldies. Well off from family money at this point, she had two apartments in the same Village building (one just for storing records) and was on a constant spree for the newest Prada outfits and pairs of shoes in every color. And when the caustic Spy magazine dissed her as "grizzled," that sent her on a mission to get surgery after surgery and change her looks, from her nose to her new "Naomi Campbell ass." Around the same time, she'd invested with a high profile money man who later got busted as a big-time scam artist, so that hurt her bank book, along with all the spending.

But as the money went bye bye, her personality grew bigger and stronger. Not a wilting flower, Anita spoke her mind and routinely made waves. She was the type of person who made a scene when given a fourth row seat at a fashion show. If she wasn't invited to a restaurant opening she felt she belonged at, she shot off a fury of angry emails about it. (Once, when a boîte relented and offered her a comp dinner there any time she wanted, she shot back, "Who's gonna leave the tip?") A perceived transgression could seem major in her eyes and that person was poisoned forever. Underneath her armor, she was still that little girl, wanting mommy and daddy's love and craving their validation, not just their money. But she offset that with loyalty, smarts, and kindness.

In 2001, I was the witness at her wedding and took her and her husband Erzen Krivca to the Windows of the World afterwards. She had a younger man in her life, and was as tickled by this development as I was.

Patrick McMullan hired her to archive photos and work on his site's blog, in addition to which she was an idea person who helped with client relations. But she kept trying side gigs that didn't always pan out. She worked on a radio show for two years, for which she got no money, and it wasn't renewed. A regular DJ gig went nowhere when the party moved, then ended.

After many years of employment, she was almost laid off two years ago. Then this year, McMullan had to lay her off for real because the business was hurting. Anita tried a lot of options, and even went to a hardware store to ask for work, but they weren't interested. I suggested cater waiting, but she thought that was below her. (But she was willing to work in a hardware store? I know, the woman was complicated.) I also told her she should market herself as an '80s DJ and do gay weddings and bachelorette parties, but she'd already gotten the feeling no one wanted her music, so she raised her hurt flag and didn't pursue it.

Recently, she started a blog on Wordpress to get her writing out there, and she was putting her old clubbing diaries together in hopes of making a book out of it. But she freaked when her computer crashed (she hadn't backed up the material) and was starting to feel the company repairing it was never going to return it. (The computer came back the day after she died.) It wasn't all despair -- far from it. Not long ago, we impulsively went into a Christmas ornament shop on Fifth Avenue where she shot a carefree video of me carrying on, for Facebook. She'd asked me to take her to the upcoming David Bowie stage musical, and I said "sure." But Anita was all too cognizant of the fact that she'd been a nightlife queen and now had to swallow her pride and work odd jobs. Society is not always kind to its icons, who are regularly discarded in favor of the younger, cheaper, and less textured.

On Sunday October 18, her husband came home from a trip to Canada, saw a note she'd left and found her on the bathroom floor with a rope around her neck. She'd also hung her red wedding dress. Her note expressed appreciation to her husband, me, pal Kohle Yohannan, and her childhood friend Linda. At times a walking raw nerve, Anita was brilliant and unique and had to be tougher to make it in a man's field, but she was a marshmallow deep down, and a fierce and devoted friend. In the '80s, when it was clear to many that Steve Rubell was dying of AIDS, Anita refused to believe he was sick. She also was certain Michael Alig didn't do it, since he'd been nice to her! For someone so experienced and with it, she maintained an ingenue's sense of trust and wonder. And she was a wanderer and very brave about it. When we went on a trip to Thailand ages ago, she stayed longer than the rest of us, wanting to explore other regions of the country by herself. Ironically, Anita had beaten both uterine and ovarian cancer, but now she took her own life. No doubt she's currently got a front row seat in the sky. If not, God's got some hell to pay.