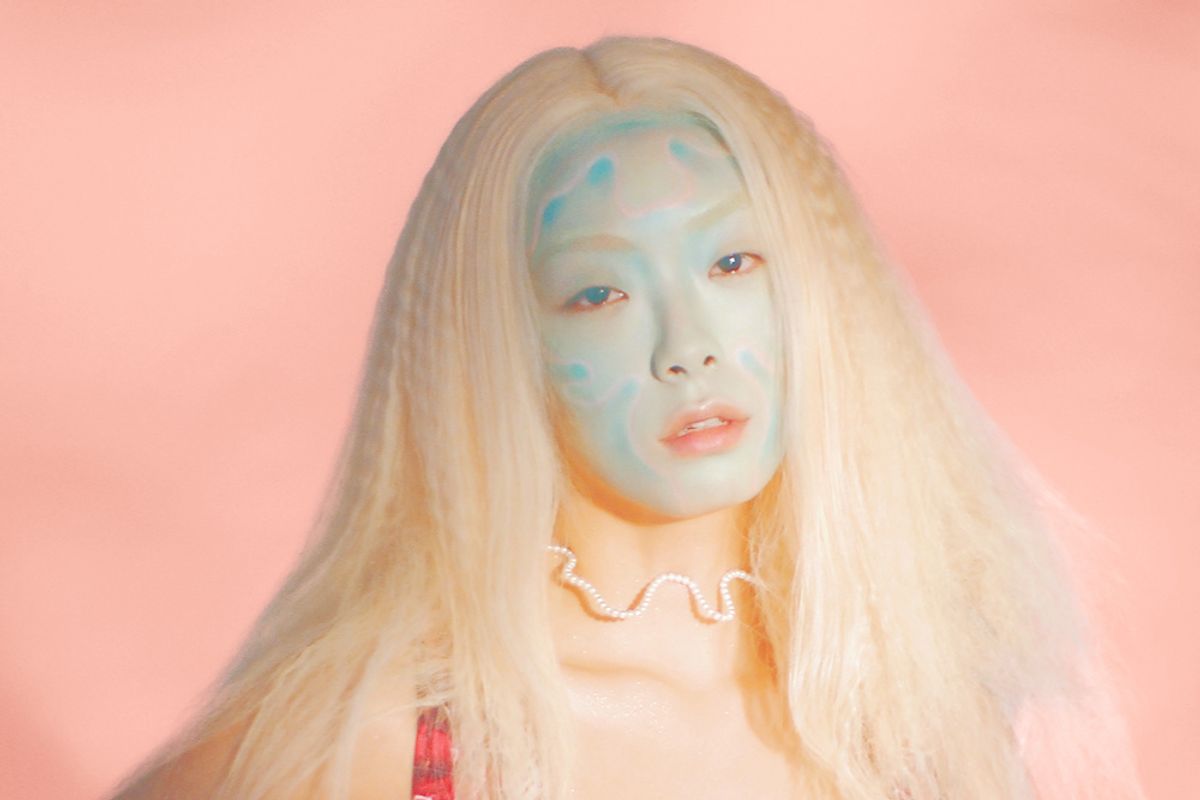 Our Favorite Genre Is Rina Sawayama

"I've been playing Animal Crossing, although I'm reaching my maximum with it," Rina Sawayama jokes over Zoom from London, where she's currently under lockdown. "There's only so much that fucking buying fences made of eggs can really motivate me to carry on. I think it kind of speaks to all my hobbies growing up anyway, which was doing things alone and playing computer games."

The musician and model has long drawn inspiration and aesthetics from the internet. Technology was the focal point of her first mini-album RINA, released in 2017. Hits like "Cyber Stockholm Syndrome" and "Tunnel Vision" helped catapult her to the center of the indie pop spotlight with their relatable lyrics and nostalgic, early 2000s production. On her Ordinary Superstar tour, she gave wristbands to those attending her shows alone in an effort to recreate the magic of online connection in a real-life space.

Her music is also concerned with concepts around identity. That same year, Sawayama dropped "Cherry," a pansexual anthem that put queer love at the forefront. And she's long been an advocate for Asian representation in entertainment. (Sawayama was born in Japan and moved to London at age five. Her mother raised her alone; she rarely saw her father after they separated and he returned to Japan.)

Now on SAWAYAMA, the 29-year-old artist's major label debut, she delves deeper into questions of personal truth, and painful loss. "Paradisin'" drips with teenage rebellion, like when Sawayama traveled up and down Paris as a 15-year-old going to shows alone. "Dynasty" lays bare the complexities of intergenerational trauma in her relationships with her mother and father. "STFU!" confronts the fetishized stereotypes Asian women are subjected to everyday.

With this record, Sawayama moves from sweet, lo-fi pop into a whole new realm: she's creating music that's energetic and loud, that could fill stadiums with her story. "I think the songs are like characters — and I just couldn't put anything weak in there," she says. "Every song has to be big."

What was it like working with co-writers and collaborators for this album?

Well, it kind of starts off quite weird because you're just put in a room with people you don't know. [Laughs] It starts off with a chat, usually, for a couple of hours, getting to know each other. Then it's like, cool, let's write a really personal song. It's like therapy because they'll be [comment on a part of your story], "That's really interesting, let's talk about that," or "That would make such a great hook, it's very clever."

I didn't really do that whole oh, I'm gonna write 300 songs and then whittle it down to 10. I knew lyrically what I wanted to write with each song, I would rather not do a session if I really didn't know what I wanted to write about because I think that can just be so boring for songwriters, sitting in sessions with artists who have no clue what they want to do. I really focused on people I loved working with in the past and wanted to write again with.

It's almost like you processed these experiences with your collaborators.

Oh for sure. It really takes really skilled, incredible songwriters who are actually really nice to be with for you to feel comfortable enough to write those things. In particular, Lauren Aquilina wrote "Tokyo Love Hotel" with me, and it's one of my favorite songs lyrically. The fact that we were able to twist the ideas in the lyrics and make the best of that, it was really cool.

Sonically, the album skews away from your previous pop sound — there's a lot more heavy guitar and rock influence. Where did the inspiration for that shift come from?

On this record, it felt like the lyrics and melody were guiding the genre wherever it wanted to go. Like "Who's Gonna Save U Now?" was not stadium rock. It started off like, 90s, Max Martin vibes. Then I'd watched that Queen movie [Bohemian Rhapsody] and A Star Is Born and I was like, it just needs to be stadium rock. [Laughs]

As an Asian American woman, I found there were a lot of parallels in our upbringing and cultural heritage. I was wondering if you also felt pressure to assimilate growing up.

Oh yeah, hardcore. I feel like in the UK it's maybe slightly worse, only because there aren't as many Asian people here. In LA, I'm like, whoaaaa Koreatown! There are so many Asian people, which I find so cool. Literally unless I go to Chinatown in London, I'm like, where are the Asians at?

That's almost why [the British Asian experience] was unique. A lot of the racist microaggressions are quite insidious in the U.K. Maybe it's the personality that we all have — hush, hush. It's like what was said in the "STFU!" video, stuff that's meant to be complementary and is just not. It kind of reads like "The Office," that kind of humor. My mum was also a single parent — but also not divorced, so my parents were separated but technically still bound in a marriage until I was 18. My mum grew up in the countryside in Japan, which is a completely different upbringing.

So that plus me growing up very British, very London, a little bit too fast as you do in cities. Her trying to understand me, and I'm not trying to understand her because I'm a stupid teenager. It's the fun of that, which shows up in "Paradisin'," but also the sadness of that as well.

I definitely see the angst and how it relates back to generational and cultural conflicts. How was it revisiting those parts of your upbringing while writing?

It was hard but great. Growing up, I really struggled with finding my own narrative. So at age 28 or 27 when I started writing this, it was finally like, what is my narrative? Are these things valid? Do I imagine things? I had such hardcore imposter syndrome in the way that I didn't know if what I'd experienced was real. There was a time where I was convinced I didn't even go to Cambridge — I thought I'd made it up.

So [finally giving my narrative validity] was really satisfying, and it's made me into a much happier person, knowing that some of these experiences were real — I did go to Cambridge, for example. [Laughs] But also that the things I'm talking about in the record were real and those feelings are valid. That's something that's really important to move on.

Where did that feeling of imposter syndrome come from?

I genuinely think it's just growing up between [my parents'] narratives. One parent would say something about one; the other would say something about another. These are all very adult conversations you don't understand as a kid — I couldn't say if either of my parents were good people or bad people. And that ties into not knowing what's true. What is my truth? One of the guiding principles around this album was trying to find that truth.

Was there a specific moment where you began feeling proud of being Asian?

Honestly, it was when I started finding friends who were also Asian. I didn't grow up around many Asian people. I met this group, my chosen family, in university. Other friends I met through Instagram. Now, one of my best friends is half-Asian, and I've got a couple of Asian friends dotted around the world. We started taking the piss out of, [joking about] our parents. That helped a lot.

Being able to laugh at our pain is huge. I look at drag queens and performers in a similar way — satirizing something that is so painful is kind of how you end up healing from these things. Whether it has to do with your mum's accent or whatever, there's that space where you can all rip the piss out of each other and there's no judgment — that's been the most important. I hated it when [I'd complain about my parents] and people would be like, "Omg, I'm so sorry." I just wanted it to be like, my mum did this and it was so fucked up, isn't that funny?

Throughout your album, like on "Bad Friend" or "Akasaka Sad," you confront the concept of loss a lot. Was it scary to tell these stories to such a large audience?

I've been going to therapy since I was really young — so I think luckily that's kind of come into some benefit. I actually find it quite enjoyable, these awkward moments and conversations. That's the thing that people grow from most. Have that awkward conversation with your parents. Tell them shit; ask them stuff. Even with your friends. Some friend groups go forever without talking about anything real. So, I love it. I think it's great to be able to use songs to heal.

Did writing about these things help you heal from that loss?

Yeah, those two really closed a chapter on things. "Bad friend" was about a real, actual friend who I fell out of touch with, and in the morning of writing that song, I checked on her Facebook and saw she had a baby. I was not part of that process whatsoever, and I felt like a terrible friend.

"Akasaka Sad" went off from "Dynasty," talking about intergenerational pain and feeling like both my parents were probably — and still are — quite depressed. There's so much undiagnosed shit going on in that generation 'cause it's not really in their culture — Asian culture but also generational culture — to talk about stuff like that. "Akasaka Sad" is about that, but also how I felt sad everywhere I went. Akasaka [itself] is a place I love staying in Tokyo, so I sampled lots of sounds from the hotel I was staying in, all the elevator sounds, field recordings from my phone. [Laughs]

I always go to Japan thinking if i'm in a country where I look like everyone else, I'm gonna feel happier, but that wasn't the case. And also having the idea of home being where my family is, but my family's just a bit of a mess, so that sort of difficulty as well.

So it was a bit of the cognitive dissonance of feeling like a foreigner in a place that you'd think would feel like home.

For sure. It was also about blaming my parents for a lot of things as well. For the longest time I did blame my mum and dad. Obviously there's definite validity to some of the blame, but it's also like an unproductive song: You can't move on if you're blaming other people all the time. That's why the song is a bit like a soup for me. There's no resolve. It kind of breaks down, whereas on something like "Who's Gonna Save U Now?" there's a resolve.

Your mini-album in 2017 was named RINA, your first name, and SAWAYAMA is titled after your last. Was there meaning behind that?

The 2017 EP was like, here I am. But [in this album], literally I'm talking about my family, and Sawayama is my family name. The source of a lot of questions, anxiety, pain. and again, I want it to be a family album, so it made total sense. It's an exploration of identity and family and Sawayama is — you know, Rina could have been an interesting name. But my surname, which is hard to say — well, for some people — that's the thing that gives me away as who I am, as Japanese and foreign. I hated it for a while, and now I love it. I'm very proud of my surname.