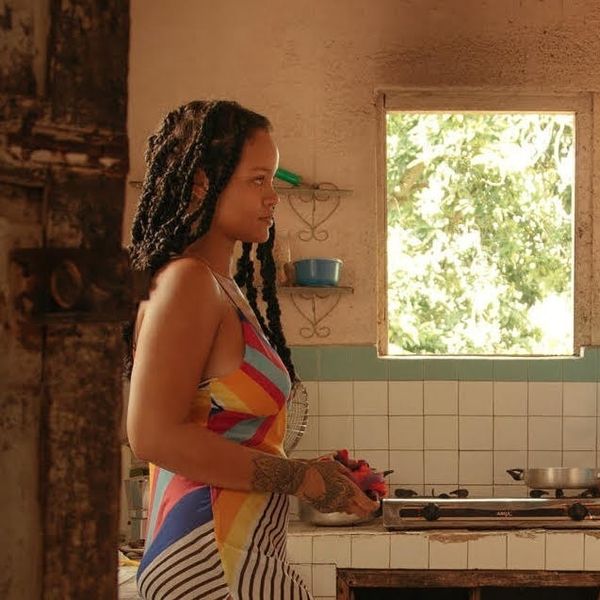 Rihanna Speaks on 'Guava Island' For the First Time

As you probably know, Donald Glover casually dropped his and Rihanna's mystery-shrouded mini-movie Guava Island right into the middle of the Chapchella frenzy this weekend.

In the Amazon Prime original (which was not a visual album, as some speculated), Rihanna plays across from Glover as the pragmatist to his idealist: they're a couple living on the fictional Guava Island, which Glover tries to save from capitalism by throwing a music festival. More or less. The reviews have been mixed, but nearly all cite Rihanna's contributions (or her limited opportunities reveal them).

Both artists were completely silent about the project right up until it dropped. Glover eventually announced last week his inaugural tweet (despite his silence, he has 2.4 million followers).

Apparently, the film was as fun to make as it looked. Rihanna spoke about Guava Island for the first time today, calling the response to the film "overwhelming" and thanking Glover (who she calls "a true gem to the culture") for "trusting" her with the role.

"It was the greatest experience being in Cuba, phones off, present with life and art! It was humbling!" she said, sharing the message along a Guava Island clip of Glover performing for her on the beach. I'd be remiss if I didn't point out that, in the shots, she is literally glowing

Guava Island is Rihanna's second major film, following her (also underutilized) performance Nine Ball in Ocean's Eight. As such, her fans have proposed she star in just about every upcoming film. But really, would it be so much to ask for a Game of Thrones cameo? Ed Sheeran got one.