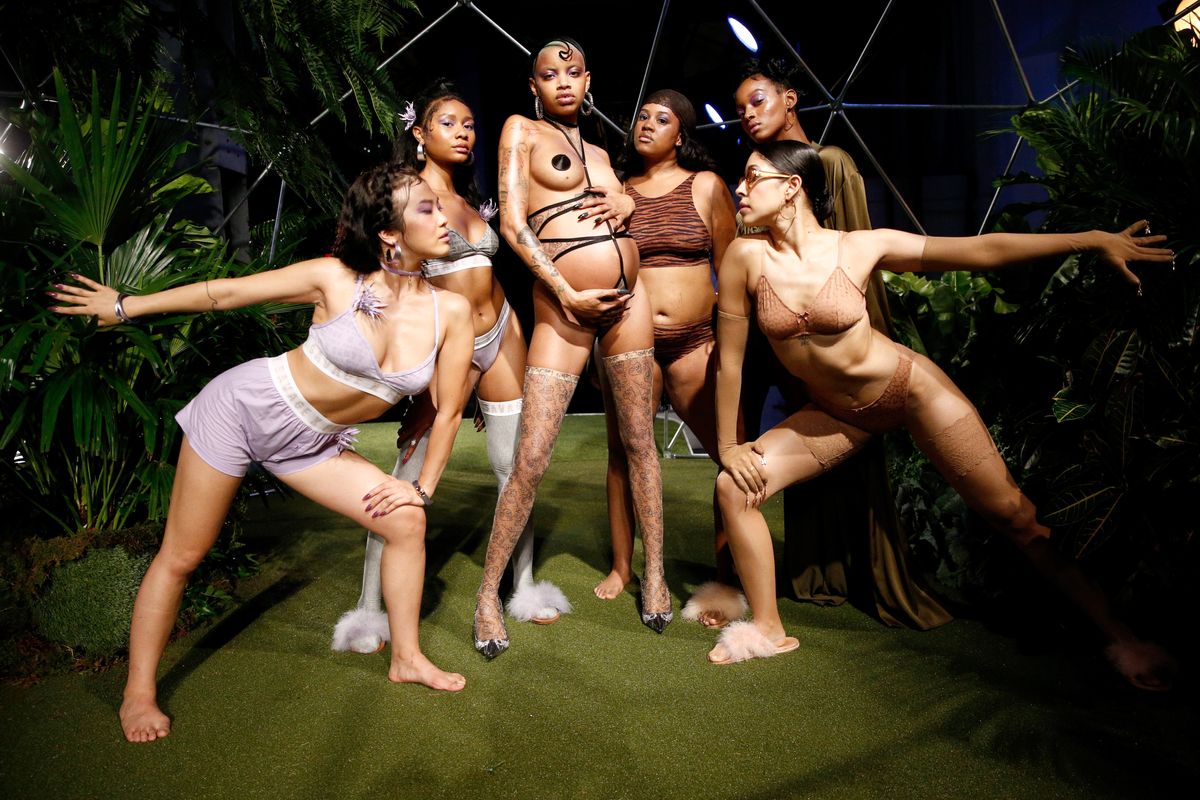 Rihanna Brought Savage X Fenty Lingerie to the Next Level

Only Rihanna could draw New York's fashion crowd to an empty building in the Brooklyn Navy Yard, on a rainy evening and after a Marc Jacobs show that started an hour-and-a-half late. But so she did, and the spectacle was worth the anticipation. Though it was a tough order to outdo her Fenty show last season, which featured flying dirtbikes and dunes of pink sand, the Rih created a utopian Garden of Eden for her gaggle of Savage babes. The space itself was transformed into a biodome filledwith tropical foliage sprouting up from lush grass-covered floors and geodomes that looked like chic blown-up planters lit with neon lights.

Performers staged around the space prior to the show moved and danced in place. As the lights dimmed, the Beatle's otherworldly acid-trip anthem "Because" began to play and models of all backgrounds, shapes and sizes emerged to mingle and move with dancers in a performance choreographed by frequent Rihanna collaborator Parris Goebel (who was also responsible for her high-spirited "Wild Thoughts" performance at the Grammy's).

True to Rihanna's mission as first stated (and realized) with her Fenty Beauty line, the show boasted a diverse range of models rarely seen in a major runway show. The singer continued to use her star power to put forth a vision of a world where women's bodies are celebrated and free, rather than maligned and controlled. The runway show itself operated within the rule of threes, beginning with a troupe of models marching out in Fenty's signature nude tone pieces, their bodies adorned with flowers, leaves and branches. The shiny, neon and iridescent looks were next, followed by more classic femme fatale get ups, including silky, sheer robes and animal-print panties. Elbow length gloves, exaggerated baby hairs, furry slides, tiny sunglasses and feather trimmed accessories added a playful edge. Familiar faces like Bella and Gigi Hadid and Joan Smalls appeared alongside newer names.

To close the show, a gloriously pregnant Slick Woods stomped the runway sporting neon green hair, black pasties, panties and a harness to a roar of applause and screams. The uproarious energy was warranted—Slick was actually in labor as she stood in front of the crowd, though you'd never know it to look at her face, which appeared serene even in the midst of childbirth. A world of goddesses indeed.

With sizes 32A–40DDD in bras and XS-3X in undies and sleepwear, the whole collection is available to shop online now.