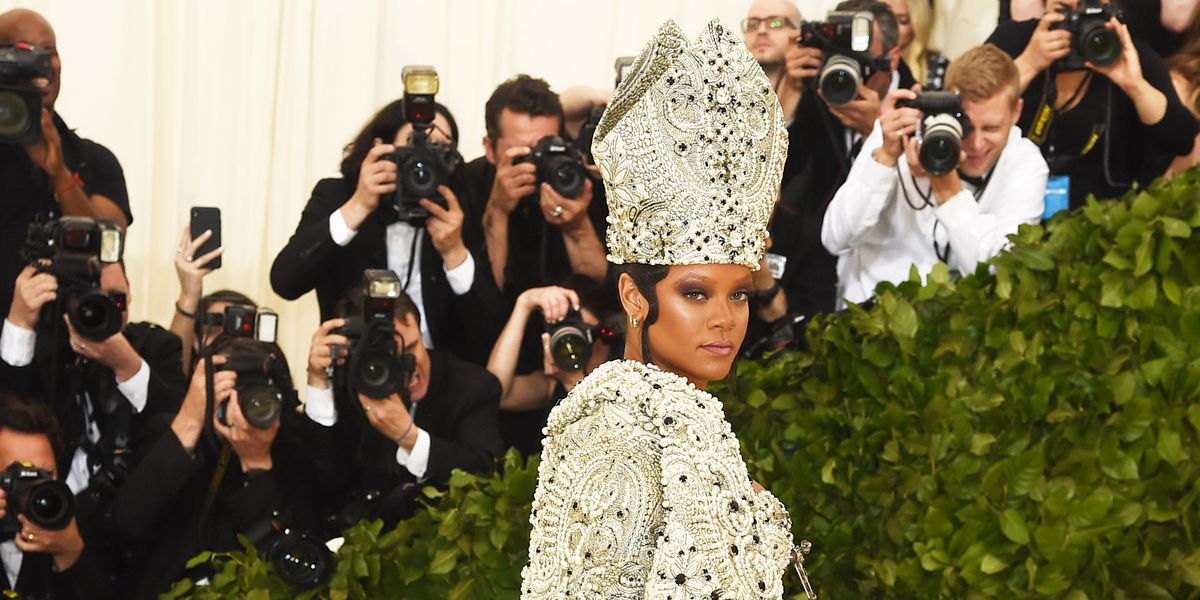 Rihanna Is Our New Young Pope

Rihanna stopped us all in our tracks when she showed up at the 2018 Met Gala. She's on the of event's co-chairs, and as per usual, she brought us some serious papal realness.

John Galliano for Maison Martin Margiela Artisanal designed her extraordinary look, complete with intricate beading that studded the entire garment. It references his Dior Couture 2001 collection, which was inspired by papal regalia. Pearls and gems traced a stunning pattern, with swirls and fleurs and crosses; like an abstract painting, you could stare at it all day. Her Christian Louboutin shoes were accented by diamond anklets, because who else could pull those off? But the focal point of the look is that stunning headpiece — it recalls the Pope's pointed crown, which is apparently called a mitre. Pope John Paul II was fond of wearing the mitre, while our current Pope Francis favors the small zuchetto skullcap.

Fans instantly declared that Rihanna is our new Pope, and we are so down with confessing all our sins to her. Is she taking over season 2 of HBO's Young Pope? Is she moving into the Vatican? We can only hope that she'll ascend to her proper levels of the divine order. Check out some of the best fan reactions, below.

rihanna came to show y'all how to follow a mf theme since you bitches don't know how to act... the pope??? found dead. jesus christ?? shamefully crawling back to his grave in his dusty sandals. her mind is too powerful #metgala pic.twitter.com/1kMTR1WUEI
— gabi ✧ (@harleivy) May 7, 2018

Pope Rihanna at the 2018 Met Gala. // Archbishop
Henry Chichele (of the 15th century) by an unknown artist. pic.twitter.com/547ToLuiM4
— TabloidArtHistory (@TabloidArtHist) May 7, 2018

Robyn, 2010: "when in Rome I sat down with the Romans/said we need a black pope and she better be a woman"

rihanna being the pope is incidentally the only way i'd ever be a catholic again
— Molly Priddy (@mollypriddy) May 7, 2018