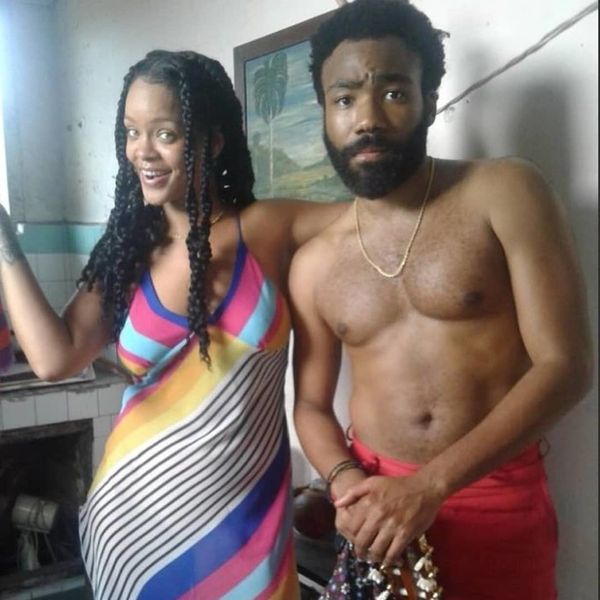 Confirmed: Rihanna and Donald Glover Are Making a Movie

Iconic collabs are proof that god loves us and wants us to be happy (or at least feels the need distract us from all this other shit she's been pulling). A freshly leaked trailer has confirmed that Glover and Rihanna will co-star in a new film which appears to be set in Cuba and titled Guava Island — and also revealed that the powers above know we have a lot to take our minds off of.

The trailer was privately screened this weekend at Donald Glover's PHAROS Festival, which the rapper-actor-comedian-producer-director hosted in New Zealand this weekend. According to Dazed, PHAROS attendees' phones were confiscated and locked away at the door. Luckily, one brave and resilient fan, committed to getting some blurry iPhone shots of Glover for her Instagram story, managed to sneak in a phone and capture bootleg footage of the trailer.

Rihanna and Glover appear to play a couple: Glover a slacker, head-in-the-clouds musician, and Rihanna, his exasperated girlfriend. The chemistry is real in the opening scene, which features Rihanna teasing Glover about his guitar skill. Also teased are lots of glorious daily life shots of a Cuban city, Glover running through the streets, people dancing and playing instruments, as well as laborers at work at a textile factory.

The trailer doesn't give much away as far as the plot, but hints that the film will tackle the island's class politics. At one point Glover vents to Rihanna: "What's wrong with me is that we live in paradise, but none of us have the time or the means to actually live here."

Glover has been a formidable force in TV, music and comedy since his Community days, but this year he's emerged as a one of the most powerful creative voices on 21st century politics and racial identity, with Atlanta and "This Is America." Rihanna starred in her biggest Hollywood role to date this summer with Oceans 8. Knowing them both, Guava Island is shaping up to be one of the most intriguing films (presumably) of next year.

A photo of the pair apparently in Cuba circulated this summer, launching rumors of a film collab, and now Cuban magazine Vistar confirms that they spent August holed up in Havana filming. The local reporting also confirms Guava Island as the film's title, which doesn't appear in the trailer.

The trailer also reveals that Guava Island will co-star Black Panther breakout star Letitia Wright and British actor Nonso Anozie. The film is billed as "A Childish Gambino Film," though it's not clear what his directorial or production role will be beyond starring in the film. Glover has directed on Atlanta, however the trailer lists "This Is America" director Hiro Murai as the director.

We can't really imagine that it'll be anything other than... a masterpiece? Visionary? Visually stunning? Stocked with a stellar cast and killer soundtrack a la Childish and RiRi? Equal parts incisively political and darkly hilarious?

No release date has been set, so maybe we're getting ahead of ourselves, but stay the hell tuned.