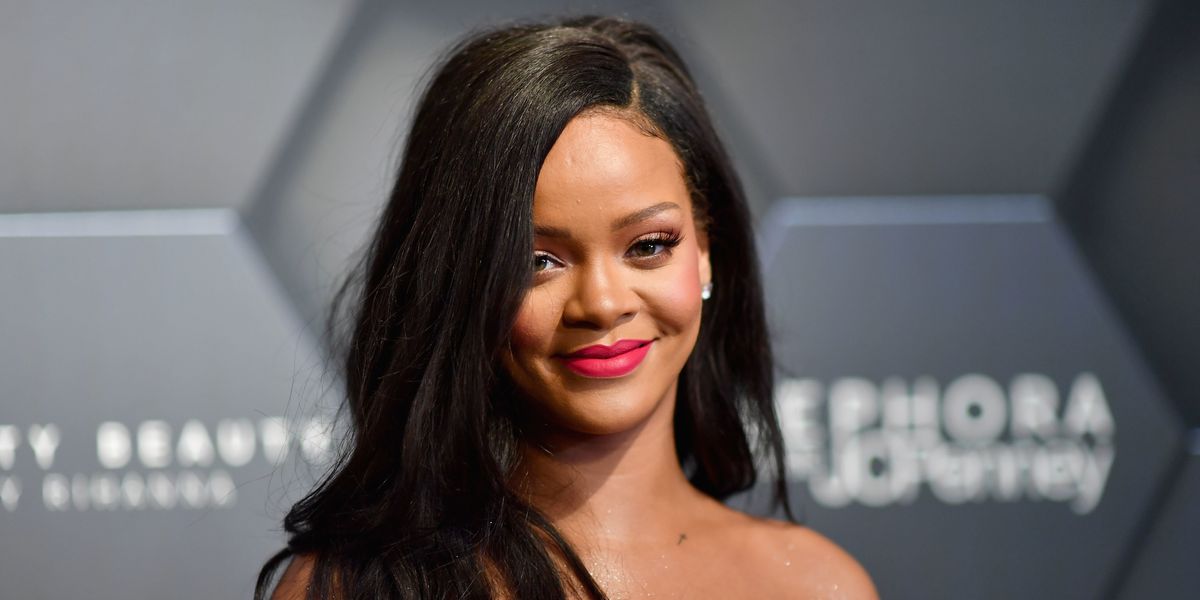 Everything You Need to Know About Fenty Fashion

No wonder she skipped Met gala! Rihanna has been working. In conversation for T Magazine with playwright polymath Jeremy O. Harris (who famously built an entire play around the song "Work"), the coolest woman on earth and paycheck snatcher has given us a roll-out plan for her groundbreaking Fenty fashion line. She also talked lots of other details about her plans do disrupt luxury fashion norms, and her historic journey as the first woman of color to create an LMVH brand. Here's what you need to know.

Fenty will be an online-first brand, operating form "digital flagship" of www.FENTY.com. The online store will go live next Wednesday, May 29. If that's a blow to brick-and-mortar shoppers who like nice stores, don't worry. According to a press release, Fenty will also supported by "ephemeral boutiques," starting with a Paris pop-up on May 24.

One of the biggest reveals is that, even though it's a sister brand to houses like Louis Vuitton and Celine that live and die by fashion weeks, Fenty will operate completely outside of a traditional seasonal fashion schedule, instead focusing on getting clothes straight into consumers' hands. Rihanna and her team will "drop" new pieces and accessories online every few weeks (on a "See-Now-Wear-Now" basis) "like singles from an album."

"I'm a millennial, you know? People are always looking for the thing that hasn't made it online yet. And as a consumer, I hate seeing something on the runway and then having to wait six months for it. I had to wait all that time to get it, do I even…" Rihanna explains of her method. "...You see it, you love it, you can have it. I want to be as disruptive as possible. The brand is not traditional. There is no runway show. It's a new way of doing things because I believe that this is where fashion is going to go eventually." She confirms LMVH's Chief Executive Bernard Arnault was fully on board, and even excited about the plan.

Rihanna's profile includes a shoot of her fully decked out in Fenty glory, including oversize structural denim, a belted tan suit, futuristic sunglasses, a puff-sleeved corset blazer — a feature Rihanna says we can expect more of: "I love a corset. We put a corset in a suit, a dress, a shirt, a denim jacket and a T-shirt dress." In each photo, she rocks a pair of "aggressively pointed" (to quote O. Harris) heeled sandals that look like murder weapons, and are likely destined to become the must-have shoe of the summer.

The star says she sees her pieces as "classic pieces" which won't go out of style that can be seamlessly paired with everything, from every budget: "You might have some Balenciaga sneakers and a Fashion Nova fit that my jacket is super lit with."

The playwright describes the collection in terms that sound a lot like the iconic Rihanna style we've come to know and love: "structured silhouettes in subdued neutrals... that emphasize strong shoulders, cinched waists and exposed legs." He also says the collection is "imbued" with "her high-low aesthetic, incorporating intricate leatherwork and meticulous techniques like boning" and promises that the looks play with gender tropes, as well.

"Women are forces of this earth. We are multifaceted, complex, vulnerable yet bulletproof, and FENTY speaks to all of our intricacies." Rihanna explains in a press release. "Some days I want to be submissive, many days I'm completely in charge and most days I feel like being both... so it was imperative that we created a line versatile enough to embrace and celebrate us in that way. The collections are easily worn together and meant to be staples in our wardrobe. I'm just hyped to see people in my clothes, man."

She also emphasized that signature techniques, fabrics and prints define the collection, including some inspired by: "Free postcards or booklets at hotels in Barbados from years ago" and "ancient paintings."

Jahleel Weaver, Rihanna's longtime stylist and newly appointed Fenty style director, reiterated Fenty's focus on multiplicity in the T story, explaining there'll be no "Fenty Woman:" "Luxury has been defined in the past as one woman, one brand: You know who the Saint Laurent woman is, you understood who the Céline woman was when it was Phoebe. Which is fine, but you think about how that relates to the modern woman. I don't think she is just one thing, Rih being the perfect example of that."

While talking about Fenty's relationship to femininity and masculinity, Rihanna also namechecked Jaden Smith and Childish Gambino as style icons. "It's sweatpants with pearls, or a masculine denim jacket with a corset. I feel like we live in a world where people are embracing every bit of who they are. Look at Jaden Smith, Childish Gambino."

Being a Black Woman in Luxury Fashion

O. Harris asked the singer if "being Rihanna" alleviated the frustrations of being a Black woman in the elitist, white world of luxury fashion. The answer? Of course not — and gender and her age have defined her experience, as well — but she "won't apologize" or "back down."

"It's never alleviated, you know? You're going to be black wherever you go. And I don't know if it's unfortunate or fortunate, because I love being black. So, sorry for those who don't like it — that's the first thing you see before you even hear my voice... I'm young. I'm new to the family. I'm a woman. Those factors do come into play, but I will not apologize for them, and I will not back down from being a woman, from being black, from having an opinion. I'm running a company and that's exactly what I came here to do. I don't know if it makes people uncomfortable or not, but that's not even my business, you know? I do know that the reason I'm here is not because I'm black. It's because of what I have to offer. That's what they're invested in. And the fact that I'm black is just that: a fact."

Rihanna, of "You Want to have a Butt, Then You Have a Gut" fame, has been consistently unapologetic about loving her body and insisting by example that non-sample size people deserve gorgeous clothes. Fenty's philosophy will follow that, breaking from most luxury brands when it comes to inclusive sizing.

"You wear what looks good on you and that's it. I'm thick and curvy right now, and so if I can't wear my own stuff then, I mean, that's not gonna work, right?" Rihanna explained. "And my size is not the biggest size. It's actually closer to the smallest size we have: We go up to a [French size] 46. We're saying we can meet you at any one drop that we put out."

The Music and Movies

Rihanna says she'll "probably try a little more" film but "not until I know I can handle a lead and carry a movie on my own."