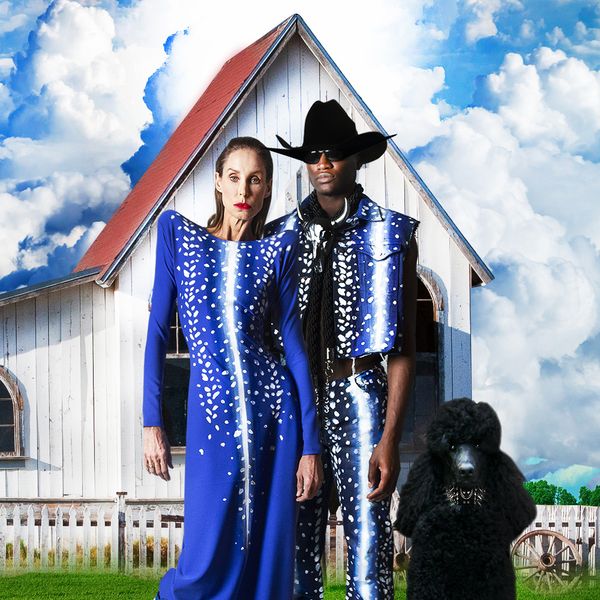 This Designer Takes Yeehaw to the Next Level

When the budding designer behind Ricky King veered from his path as a painter and sculptor to start his own label, there was no guessing how quickly his craft would find an audience — and a movement.

Taylor Ross was born and raised in Colorado and, while he's no stranger to that Yeehaw life (he named his brand partially after his late cousin Ricky, a rodeo rider), it took a few twists of fate to align him with his passions. Jeremy Scott hired him to paint leather jackets for the designer's fall 2013 collection and, by 2015, Ross' own label was born.

The Colorado native taught himself cut-and-sew techniques and turned his artistic ambition over to fashion design, refashioning the vintage leather pieces he thrifted between Denver and Los Angeles with his signature, graphic paint strokes.

The effort quickly led to another big break on the set of Lady Gaga's 2017 "John Wayne" video, where she donned a bustier made from old cowboy boots. "Seeing my cowboy boot bustier in action on Gaga in the 'John Wayne' video was amazing, and I knew I wanted to bring in another piece made from cowboy boots for this collection, so I ended up making a codpiece/thong — fully impractical and fully fabulous," Ross tells PAPER.

Continuing to evolve his hand-crafted construction techniques, Ricky King's fourth collection, titled "Americana," taps into some iconic imagery from the past. "Cowboys, greasers, sailors... I see it as kind of a tribute and a parody," Ross says of his inspirations.

He created a series of collages that feature his clothes against open-air landscapes and surreal all-American scenarios. "I drew inspiration from some of my favorite artists like David LaChapelle, Pierre et Gilles, John Waters, and Michael the III," Ross says. "I've been developing a style of digital collage for years, and this project feels like a true culmination of all my creative skills."

"Cowboys, greasers, sailors... I see it as a tribute and a parody."