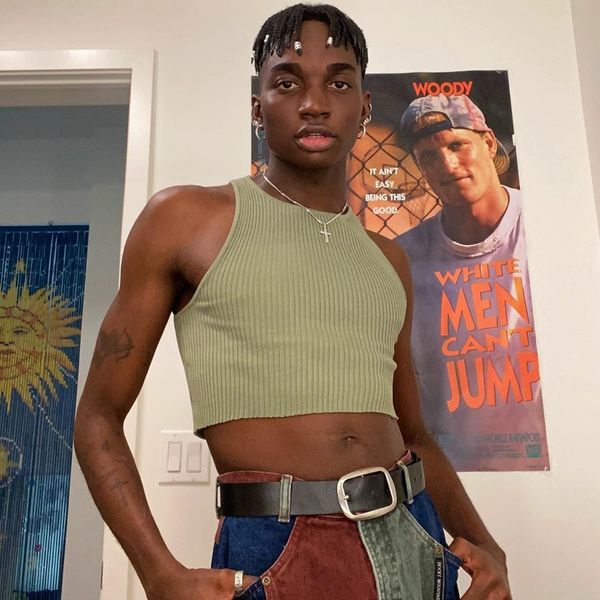 From his recent purchase of a massive Jeep Wrangler ("paid in full!") to adopting an adorable new puppy named Emma, Rickey Thompson is still living his best life despite having to stay cooped up in his swanky LA pad. In fact, it seems quarantine has only made him funnier as it's forced him to be more creative with his usual comedic antics and improv confessionals.

"I'm very limited as to what I can talk about since I'm not out there in the world experiencing different things," he tells PAPER. "That's usually where I get my content inspiration from, anything to do with everyday life I can talk about, but since nothing has really been happening, it's kind of limited but I can still find stuff to talk about."

Among these topics are anything and everything food-related, what he's binge-watching and contemplations about why he's still single, all delivered with his signature energetic flair. In between the occasional thirst trap or fashion flex, he'll invite you to a quarantine workout or show off his unmatched twerking skills.

Related | Julio Torres and His Shapes Are Just Barely Holding Up

One of the last places he's traveled was at Milan for Fashion Week, where he attended the Moncler show after making the rounds in New York the week prior. He's been shopping online nonstop so that his wardrobe would be ready to go post-quarantine. (Saint Laurent, Vetements, Maison Margiela and Prada are among his faves.)

Thompson, who wants to get into acting more, also has a virtual prom event coming up with Axe, where he invited his nearly 6 million followers to submit a "promposal" to him to be his date. "When I was in high school I did not get a promposal at all," he said. "I literally wanted one so bad but nobody asked me to prom but it's okay, it's fine, but now I got a few and it really made me feel so good. I was like 'Wow, they really do love me.'"

But it's the pampering routine he misses the most, and plans to get his nails and hair done as soon as he's able to. "I miss getting a nice buff on the nails, I miss my fresh braids," he says. "When I think about this whole situation I really did take my life for granted. I always stayed home like, 'No I don't want to go out tonight, no I'm just going to chill by myself.' Now I'm itching to go out, to a club, to a bar... but I'm staying positive and soon I'll get to do that again. Once I get out of quarantine I'm going to live my life to the fullest."