Richard Quinn is only two years in to running his label, but he's already amassed some major recognition: the British Emerging Talent for Women's Wear at the Fashion Awards in 2018, and the Queen Elizabeth II Award for British Design last year, which cemented him as one to watch and put him on the map. He's maintained his maximalist, surreal aesthetic in the collections since, and his leopard/floral combinations have been his signature print.

For Spring 2020, he pivoted away from face masks and psychedelic prints and instead designed a show centered on beauty, femininity, and the classic rose — while still staying true to his extravagant vision. The biggest surprise took form in a group of tiny little schoolgirls who walked the show, dressed in matching feathered hoodies and pink floral dresses, all of whom looked adorable alongside the statuesque models. Here's everything else you need to know about the collection. 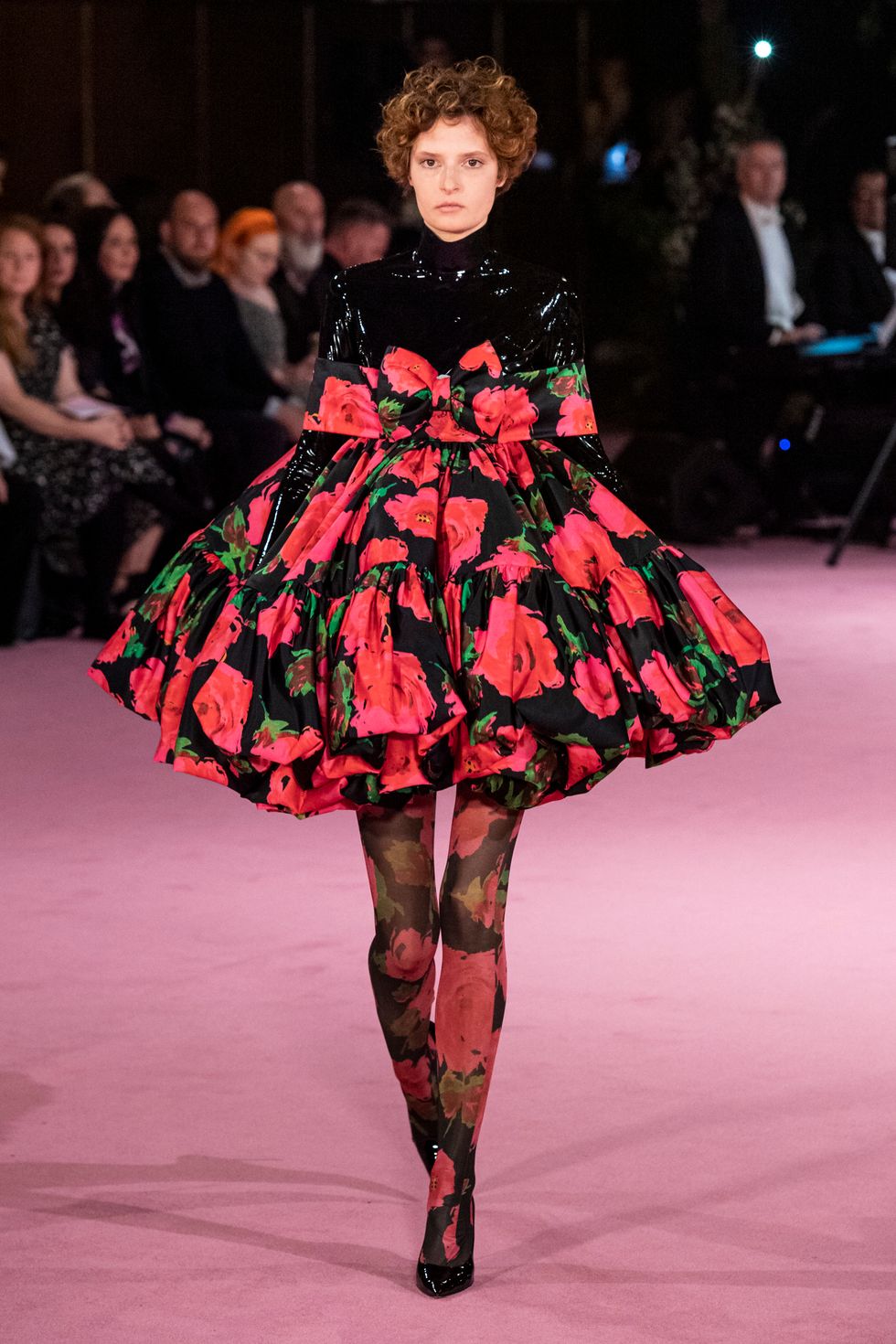 The red rose was a major recurring motif this season, blown up to big proportions on babydoll dresses and floor-length frocks with billowy sleeves like the one worn by early 2000's supermodel Erin O'Connor. 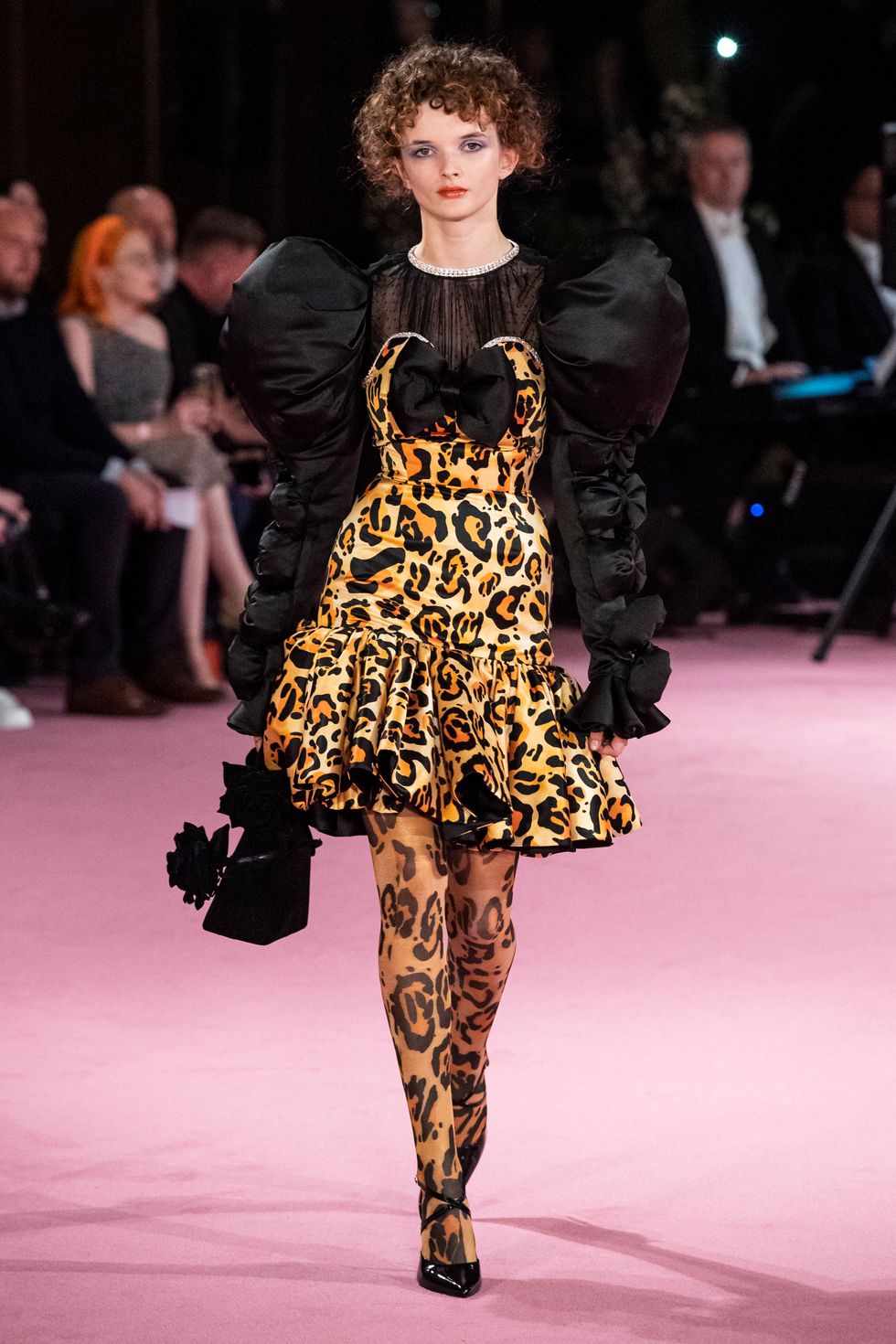 Quinn's signature leopard prints have become one of his more recognizable design elements (plenty of them were also incorporated in his Moncler collab, which dropped last week). From tights to coats and dresses, they played a big part once again this season. 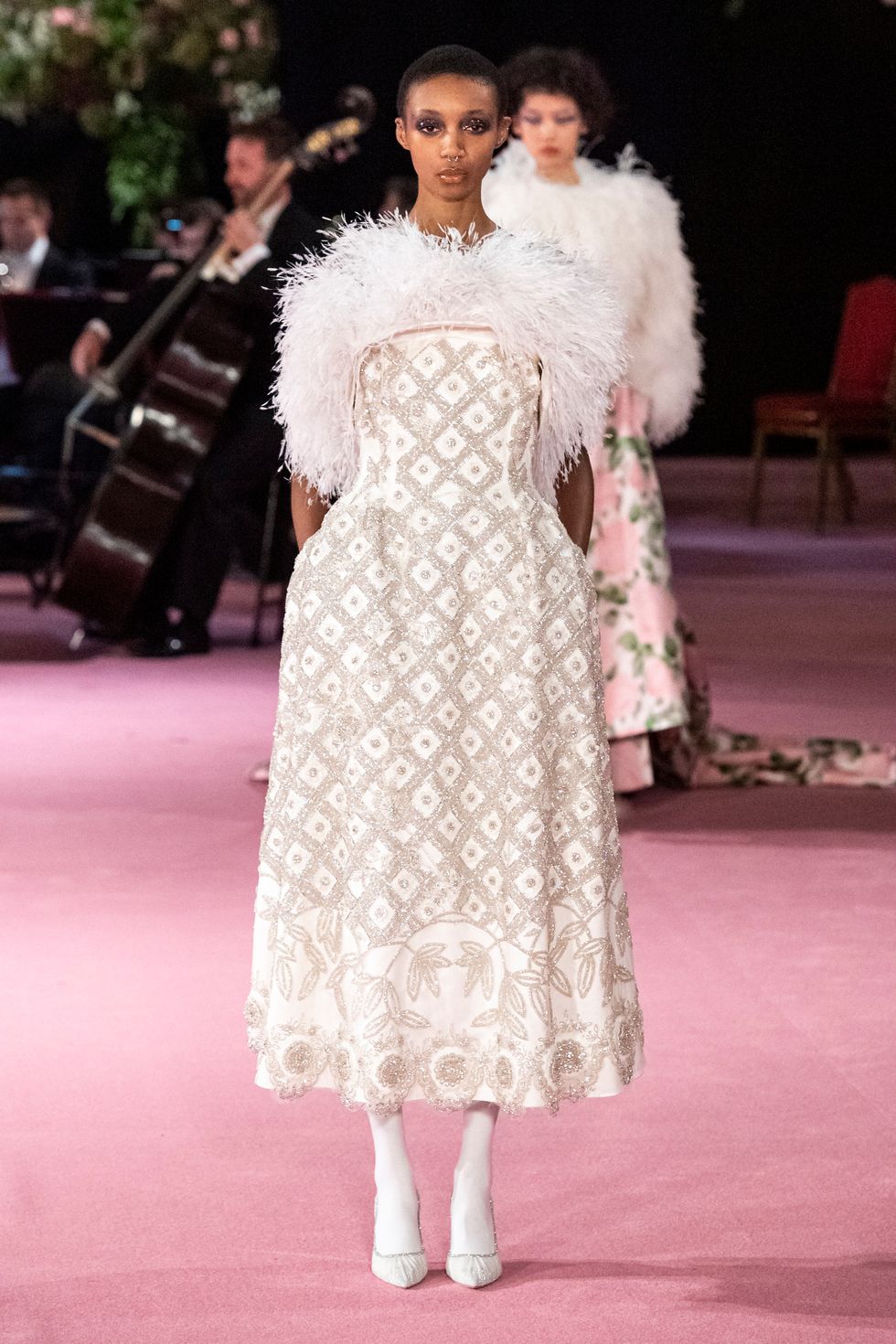 The crystal-studded finale looks were Quinn's modern interpretations of bridal looks, with big poofy shoulders and feather adornment giving it his unique stamp. 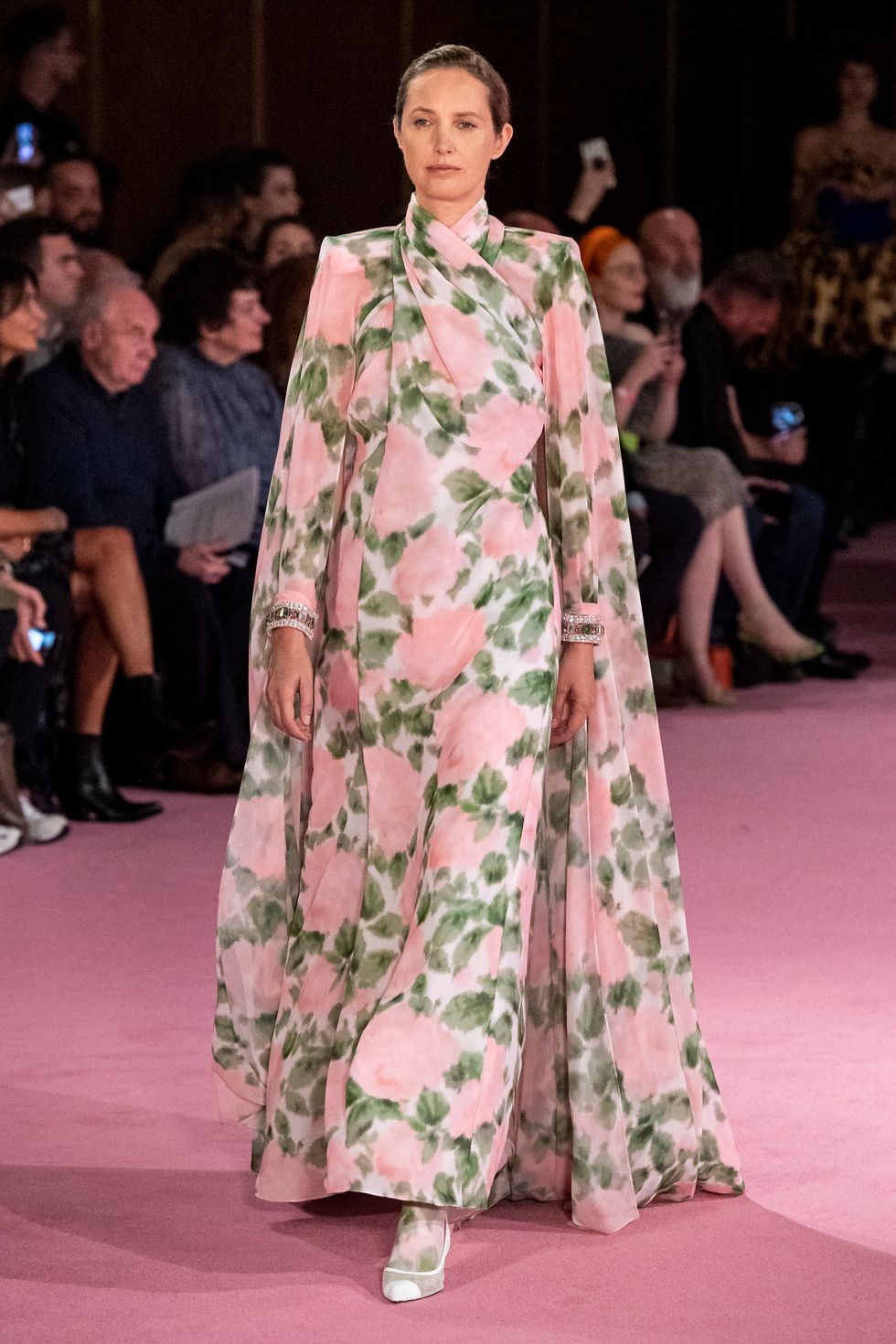 Not all heroes wear capes, but they certainly provide a powerful presence. From hot pink numbers to blue painterly florals on models of all ages, these looks command attention in any room. 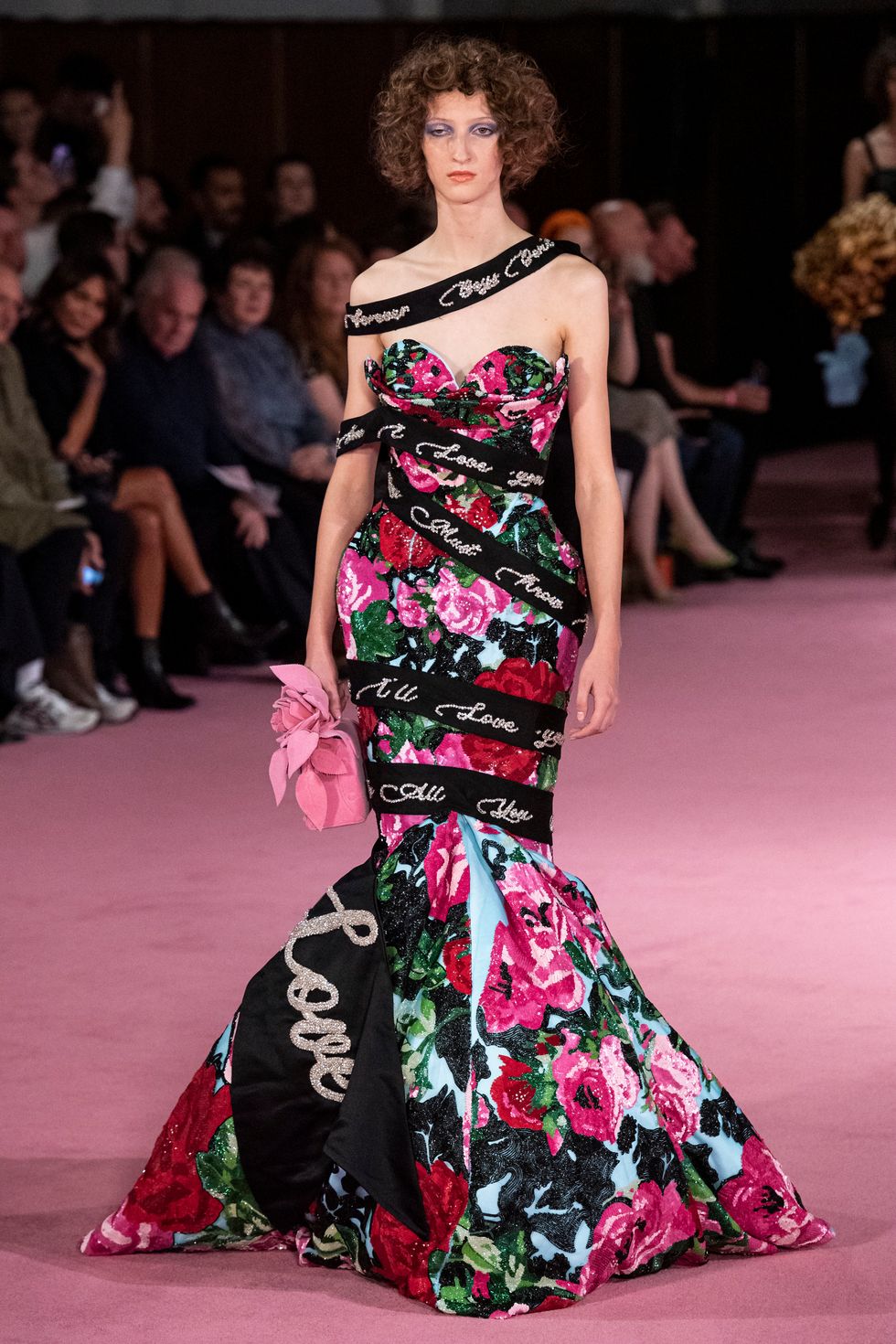 Some of the strongest looks were those with sharp hourglass silhouettes and mermaid trains. Sashes, latex, and big ruffles give pageant queen a new meaning.