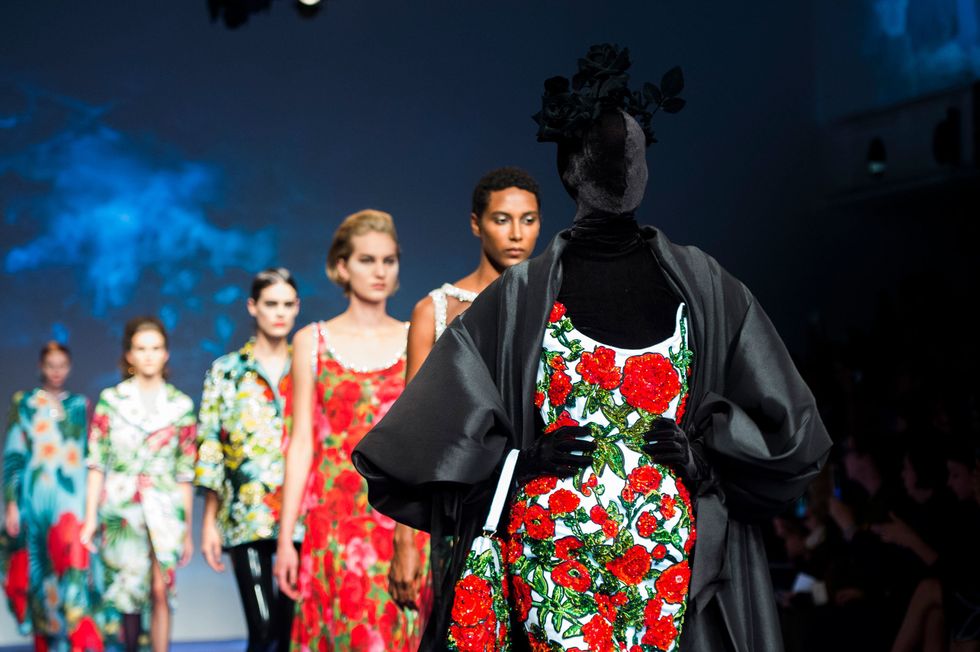 Last season, after Queen Elizabeth II sat next to Anna Wintour at his show, Richard Quinn blew up. The designer rapidly attained Instagram followers, celebrity endorsements (Amal Clooney, Adwoa Aboah), and landed on major stockists (Machine A, 10 Corso Como, Dover Street Market). And it's all for good reason: Quinn has a singular vision and drive.

In a recent Business of Fashion profile chronicling his meteoric rise, Quinn said that his latest collection reflects "old kinds of couture shows, where you see definite groups of girls throughout." And the collection did seem divided into sections. There were Quinn's aliens, covered in velvet from head to foot, and his trademark pattern mixing (he runs his own print studio, and liberty prints are a signature). Models walked in clashing animal prints from head to toe, like safaris personified. And, perhaps in a nod to his most famous guest, Quinn introduced embellished, 1950s-style cocktail dresses, which he described as "hyper-glamorous."

But advocacy may have been the most important element of the show. Quinn invited art students from the London state schools he himself attended, alongside print students from Central Saint Martins (where he counts as one of many accomplished alumni). Quinn wanted to highlight the importance of arts education in Britain, and included a statistic in his show notes showing that there has been a 34% drop in arts GCSE entries (sort of the equivalent of American AP classes) in the past eight years. The designer pointed out that arts subjects are "under threat in secondary schools in England," and yet serve as the "foundation of [Britain's] £32 billion fashion industry."

Quinn urged attendees to write to the organization Bacc for the Future, which pushes government reps to keep arts education in schools. If we want more designers like Quinn, it's certainly a worthy cause.