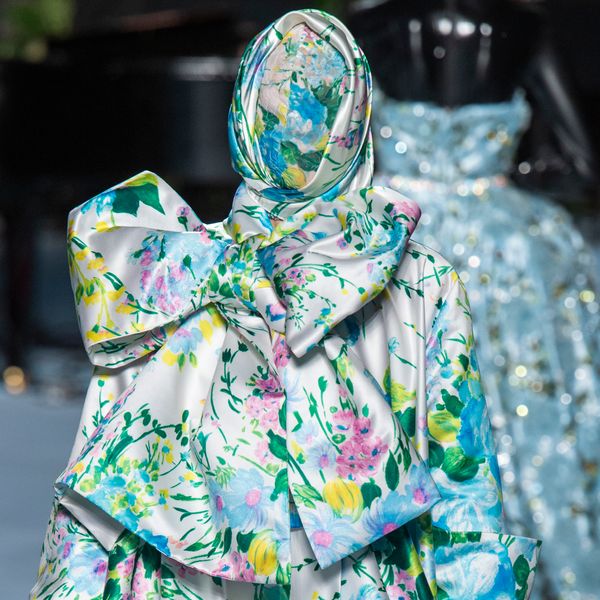 One year ago, the Queen was the guest of honor at Richard Quinn's show. Just a few months later, Amal Clooney wore a wild pant and top combo from the label for The Met Gal. One thing is clear: Quinn has steadily been rising as one of the coolest British designers to watch and nothing seems to be stopping his ascent to the top. For fall 2019, Quinn presented a colorful collection full of beautiful contradictions that was equal parts fashion show and theater. Here's everything else you need to know about the show.

Peonies, roses, daisies and almost early flower imaginable was used as a print for the fall 2019 collection. In vivid colors, some tiny, some blown up, the prints were less romantic and more modern, especially when paired with unexpected shapes such as exaggerated shoulders.

Many of the floral printed gown were layered over midnight black, super shiny latex bodysuits that went from toe to fingers. This gave the otherwise girlish looks an unconventional spin, while Freya Ridings played the piano and sang in the background.

It's clear that Quinn's work continues to become more and more elevated, both in terms of fabrics and silhouettes. This season in particular, some of the pieces were so strong in their architecture that they resembled couture from a different era. Massive puffed shoulders, bubble hem dresses that looked like little balloons and billowing bows deserved high praise.

There were also several looks shown on models wherein their faces were covered with the same floral fabrics as the gowns. It may have felt slightly Margiela-esque but it also underscored the power of print in this collection.

Swarovski crystals covered the collection. Emerald and Tanzanite toned Fancy Stones were on sleeves and hoods. Shoes and earrings were also decked out in crystals — all of this was layered over watercolor prints to create multiple layers of texture.