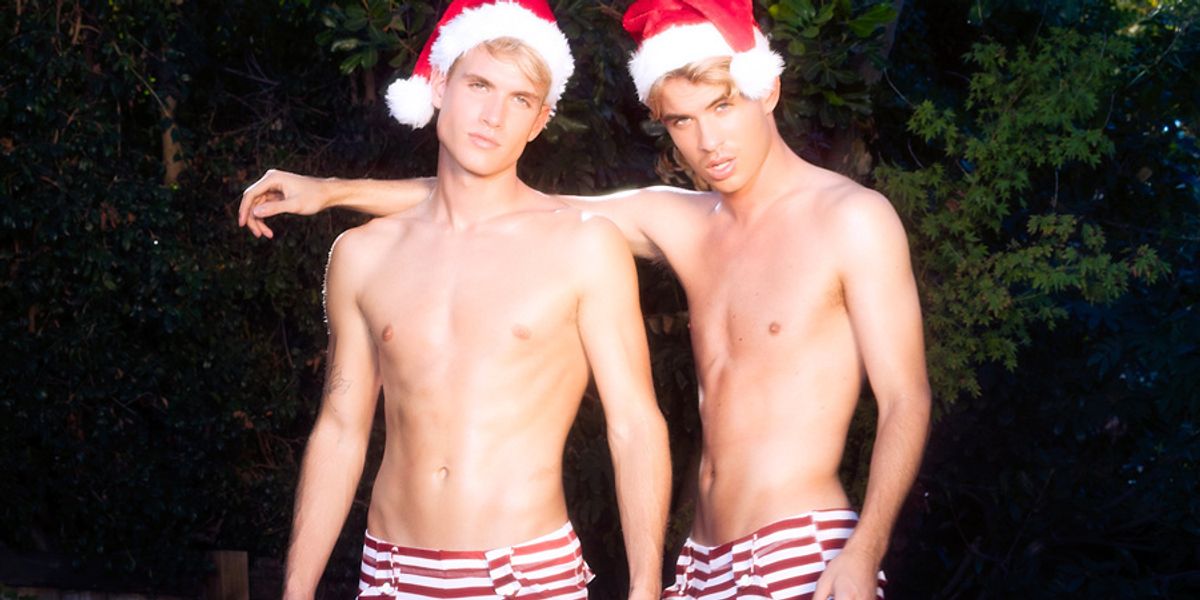 The Rhodes Brothers Are Coming to Town

In January of 2015, twin brothers Austin and Aaron Rhodes became viral sensations when they posted a video to their popular YouTube channel of them coming out as gay to their father over the phone. The emotional video has racked up more than 25 million views since then, and in addition to growing the charismatic brothers' social media presence tenfold, it also catapulted them into a more mainstream arena, with an appearance on Ellen Degeneres' talk show and parts on the first season of "Scream Queens."

Having made the move from small town Ohio to Los Angeles, the brothers continue to spread their wings, engaging with their audiences across social media in addition to branching out into fashion, style, acting and music. (They also posed as a pair of naughty elves for PAPER's Break the Internet shoot with Real Housewife and music star Erika Girardi — aka, Erika Jayne.)

PAPER caught up with Aaron Rhodes to chat about life as a twin, new projects on the horizon and why YouTube is such an important community for teens:

PAPER: Congratulations on the shoot! What was it like working with Erika?

Aaron: I loved the shoot. It was so out of our comfort zone, because we'd never really done anything a little risqué, although I guess it really wasn't that risqué. But for us it was a bit out of the box. Erika was a ton of fun to work with; it was a good dynamic and I feel like the gays will love it. I had never seen the Housewives, but going into it Austin was like literally hyperventilating. I was like, "Austin, calm down!" Meanwhile he's literally sitting between her legs.

the bros x @theprettymess for @papermagazine #breaktheinternet issue out now ✨ happy ho ho holidays
A post shared by Aaron Rhodes (@rhodesaaron) on Dec 7, 2017 at 10:45am PST

PAPER: What kinds of projects are you guys working on right now?


Aaron: Austin and I are kind of in a transition period. The coming year is going to be projects that are a lot different from what our audience is used to, so we're pretty excited about that. A lot of people don't know this about me, but I've been writing music since I was very young, and I've always been really interested in songwriting and I just never really explored it because YouTube in some ways commandeered my focus for awhile. But as Austin and I explore new things on our own, music is something I'm really interested in for the new year. I'm excited for it.

PAPER: What was it like for you guys to move from the Midwest to LA?

Aaron: Austin and I were only eighteen at the time when we moved here, and we had nothing. We'd sold our cars and had fifteen hundred bucks each, and we were like hustling and sleeping on floors and people's couches for six months. We got a job at a restaurant and started a YouTube channel and just organically grew it. Obviously our coming out video took it to a whole new place. It was definitely a culture shock because it very different from what we grew up with. We're from the middle of nowhere. But we've always been out there and crazy and were always trying to take over every place we were in so it totally made sense for us to move here. But it was very different.

PAPER: Coming out videos are kind of their own genre by now; why do you think yours resonated so much with people?

Aaron: I feel like there had been coming out videos before that inspired us to make ours, but I think what made ours stand out a bit is that we weren't really talking at our audience and saying, "Hey guys, we're gay." We started the video with that, but then we showed people a real moment and real emotions and I feel like a lot of people, whether you're gay or not, could relate. We've all been through situations where we've had to come out about something in our life. Those raw emotions of being so afraid and scared, and that relief when maybe what you thought was going to happen is totally different and the outcome is much better — that resonated with people. And the fact that my dad's reaction was so good.

PAPER: Has your family always been supportive?

Aaron: With my mom, it was a bit of a journey. I grew up very religious and went to church every Wednesday and Sunday and everything, so she took a little bit more time. But she always from day one said. "I'll support you no matter what and be there for you, I just have to figure this out."

My family has been amazing. If they don't understand something, they'll read as much as they can about it, and now my mom runs a non-profit that helps LGBT youth and she's a great advocate, it's incredible. She goes to pride parades with me and everything.

PAPER: That's amazing. It must be especially crazy — and cool — to go on this journey with your twin. What's that been like? How do you navigate that relationship?

Aaron: It's funny you asked that, because as for what's coming up in the new year, I think Austin and I reached this point recently where we've always worked together in some capacity, but creatively, we're have different interests. A lot of times people want to put twins into this box and think that we're always together and always love the same things, but in reality we're very, very different.

Over time, when you're younger the twin thing is fun and cute and whatever, but as we've grown a little bit we've definitely had this conversation of how we're gonna take this into a new direction where I'm gonna be able to fulfill my creative side and likewise for him. We've done actually a pretty good job at it I think; there's definitely moments where we're stressed out about it but we're figuring it out day by day. Being a twin is very hard sometimes.

PAPER: I imagine you're super close.

Aaron: I tell people all the time that when I get married, he'll probably still be the first person I go to for things because he's just like — the twin relationship is the hardest thing to explain because it's the one person that literally has known you since you the beginning. Him and I just get along really well and are able to balance our personal lives and our relationship as well which is great for us.

PAPER: That's amazing. How often would you guys say you interact with your fans? You obviously have a massive fanbase.

Aaron: I tend to go through comments sometimes and respond back, and I get DMs all the time and letters and things from people that are inspired by our story. Our coming out story is still the reason why a lot of people reach out. We're not those people that respond to every single DM or comment but we interact with our fans through our content and our storytelling. For example, we just did a video about how we met our first boyfriends because that's a question that a lot of people have asked us. We intend to make videos about things that people seem really interested in.

Aaron: They give kids from every background, every ethnicity, and every sexuality a place to plug in and relate to. Growing up I felt a bit isolated in Ohio, and YouTube had just started. Seeing those first coming out videos, or people who were sharing their sexuality online in a different way, whether they were talking about it or not, they were just living an authentic life, and it used to just fascinate me, I was in love with it. And I think that has a lot to do with what we do now. YouTube and social media in general, while a lot of people want to critique it nowadays and say that it's changed a lot of things — it has, but it also has given so many kids around the world somewhere to feel welcome and at home and at peace with how they're feeling. Whether you're LGBT or not, you're gonna find yourself somewhere online.

PAPER: As you guys branch out into other things and explore other venues, do you see yourself ever dialing back on YouTube or is it something that will always be a core part of your career?

Aaron: I feel like YouTube will always be the core of Austin and I's career, just because it's where it started. YouTube has been this place where we found ourselves, and it's been a growing thing and I'm very interested in keeping it going. As different projects come in and things fluctuate, I'll always go back to it. It'll always be my baby; it's what I grew first. It's an interesting question. I don't think I'll ever leave it completely. But who knows what the future holds?