Restaurant of the Week: Benoit 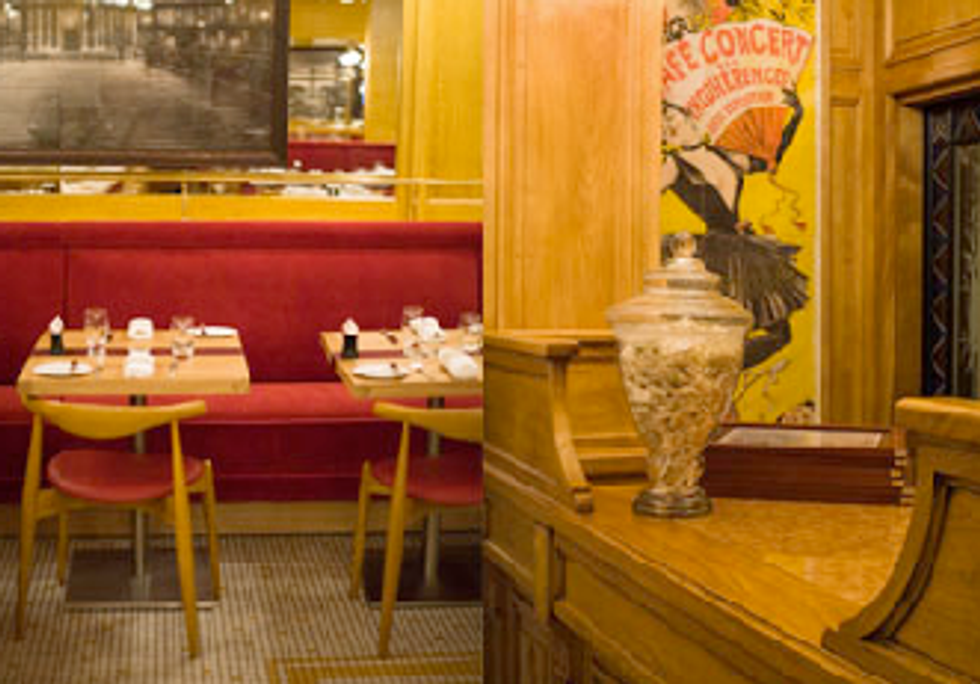 At a recent visit to Alain Ducasseâs new Midtown outpost of his legendary Paris bistro Benoit, something that doesnât tend to happen in Midtown happened. Our whole row of red-velvet-banquette-mates struck up a lively conversation. Maybe it was due to our close proximity to each other (we were squeezed into our seats slightly sardines-style), but the fact that we were all feeling both the food and ambience most likely also contributed to the general conviviality. Recalling its Paris counterpart, Benoit features elegant wood paneling, lots of mirrors and vintage French posters. Ducasse, along with longtime collaborator executive chef Sebastien Rondier, have created a flawless, totally reasonably priced, classic French menu. Our gracious waitress suggested we start off with the house special, the Lucullus-style langue de veau ($12) aka veal tongue. For the less adventurous, the onion soup gratinÃ©e ($9) was all we had hoped for and more. The warm asparagus with mousseline sauce ($16) featured the meatiest and most tender asparagus weâve ever encountered. As for the mains, the duck Ã  lâorange with turnip confit and bigarade (a bitter type of orange) sauce ($24) was perfectly saucy. The folks at the table next to us seemed pleased with their cassoulet ($26) and the couple two tables down highly recommended the roast chicken for two ($44), served with garlic cloves and French fries that dramatically arrives as a whole chicken and is then swept away to be carved and sliced. For dessert, we ordered the chocolate soufflÃ© ($10), which, after an incredibly rich dinner, almost pushed us over the edge. A friendly French bistro experience is a rare one. Which is why Benoit is that much more of a gem. Benoit, 60 W. 55th St., (646) 943-7373