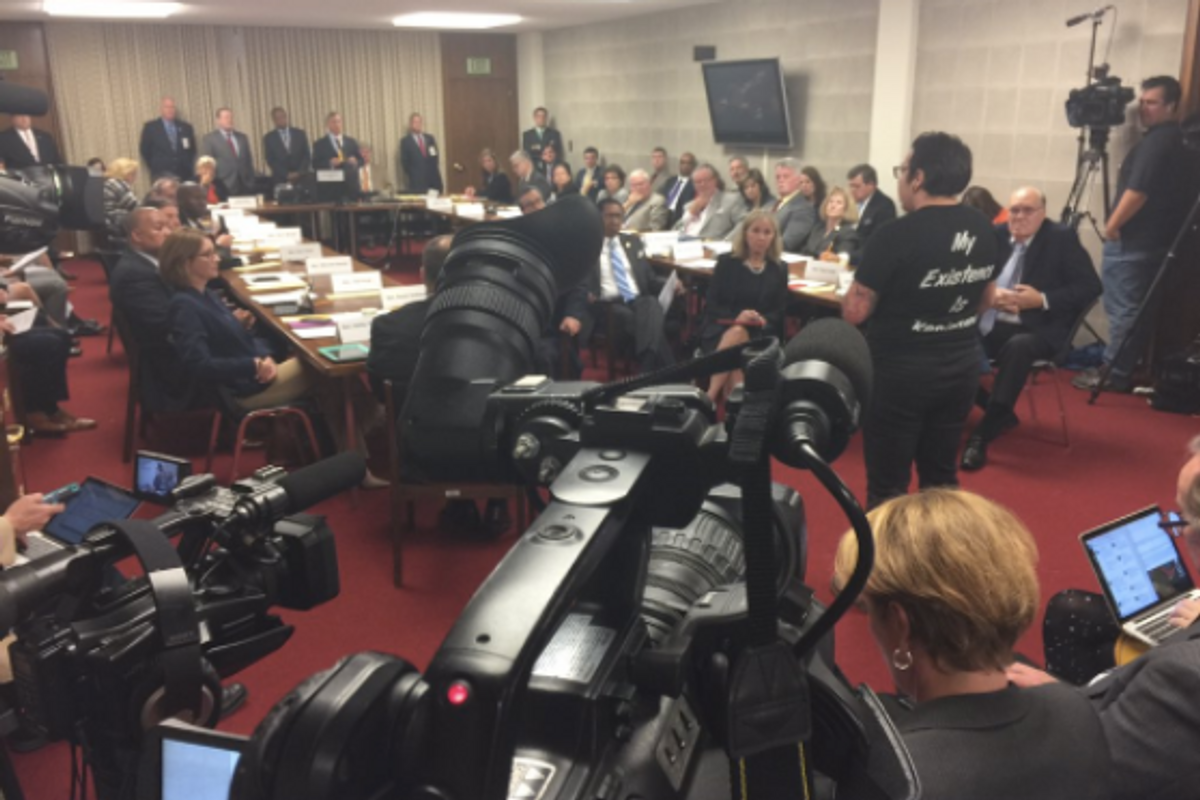 The bill sparked a national conversation about transgender rights when North Carolina's Republican-majority General Assembly passed it. The bill was a reaction to a Charlotte nondiscrimination law that would have allowed transgender people to use the public restroom of their choice.

HB2 mandated that everyone in the state use the bathroom that matched their biological gender as listed on their birth certificate, overriding city ordinances like the one Charlotte passed.

Advocates for LGBTQ rights, including the ACLU, The Human Rights Campaign, Equality North Carolina and Lambda Legal have been urging for HB2's repeal since it was passed last March. The bill became a point of contention in the presidential campaign, and Republican Governor Pat McRory, who signed the bill into the law, was ousted in the November elections by Democrat Roy Cooper, whose central campaign promises included repealing the law.

Because of the on-going battle over HB2, it would seem like good news to the LGBTQ community and its allies that it was officially repealed today. However, the specifics of the bill that replaced it, HB142, and the financial and political reasons behind the decision to repeal and replace tell a different story.

The new bill does away completely with HB2 and its 'biological bathroom' mandate. Great. But HB142 also forbids "state agencies, boards, offices, departments, institutions, and branches of government," (including public schools and universities), from regulating "access to multiple occupancy restrooms, showers, or changing facilities." This also applies to "local boards of education."

What does this mean? All of these government entities are now barred from passing trans-inclusive policies without the blessing of the General Assembly. No specifics about how that might happen are provided, though, and the unabashedly anti-trans legislature is unlikely to grant such permissions anyway.

HB142 would also impose a moratorium on local LGBTQ nondiscrimination ordinances until 2020. This means cities like Charlotte can't pass any kind of protections for its trans and LGBQ citizens until December 1, 2020, when the bill will be revisited. This effectively kicks the issue back to the federal government where the Supreme Court is currently hearing a related case.

So even though trans people would no longer be technically barred from using the public restrooms of their choice, they're also not protected should they choose to do so. Under the new bill, they're also left completely vulnerable to harassment and discrimination by private businesses. "There is no requirement that would prohibit the baker, florist or photographer from saying, 'I have an objection to performing these (same-sex marriage) services,'" Professor Greg Wallace at Campbell Law School in Raleigh said. "It's not illegal to discriminate on that basis."

And in case you're wondering, LGBTQ people aren't legally protected under federal law, either, which currently only bans discrimination based on "race, color, religion, or national origin."

The ACLU, Human Rights Campaign, Equality North Carolina and other LGBTQ rights groups big and small have already come out against the bill, which Governor Cooper signed into law this afternoon. His reasons for doing so even though he ran on an LGBTQ-friendly platform appear to be purely political - the pressure to repeal HB2 and stick to his campaign promises was growing, and the costly financial fallout from the bill was becoming a point of contention on both sides. Tellingly, former governor McRory is in favor of HB142.

The Associated Press estimated this week that HB2 could have costed the state $3.76 billion over a dozen years. For example, the NCAA publicly announced a ban on hosting events in the state through 2022 if the bill remained in place, and with the NCAA finals coming up, this was not a good look for North Carolina. High profile musicians and artists have also canceled visits to N.C. over the bill.

Back in Charlotte where this all began, The Observer's editorial board weighed in, saying that Cooper "failed spectacularly" in making this deal. "It is a betrayal of the promises the governor made to the LGBT community and a doubling down on discrimination by Republican legislators who have backed it all along," the editorial said. "House Bill 142 literally does not do one thing to protect the LGBT community and locks in HB2's most basic and offensive provision."

Joaquin Carcaño, the lead plaintiff in the original lawsuit against HB2, spoke out this morning too, saying, "Lawmakers are choosing basketball over transgender rights."