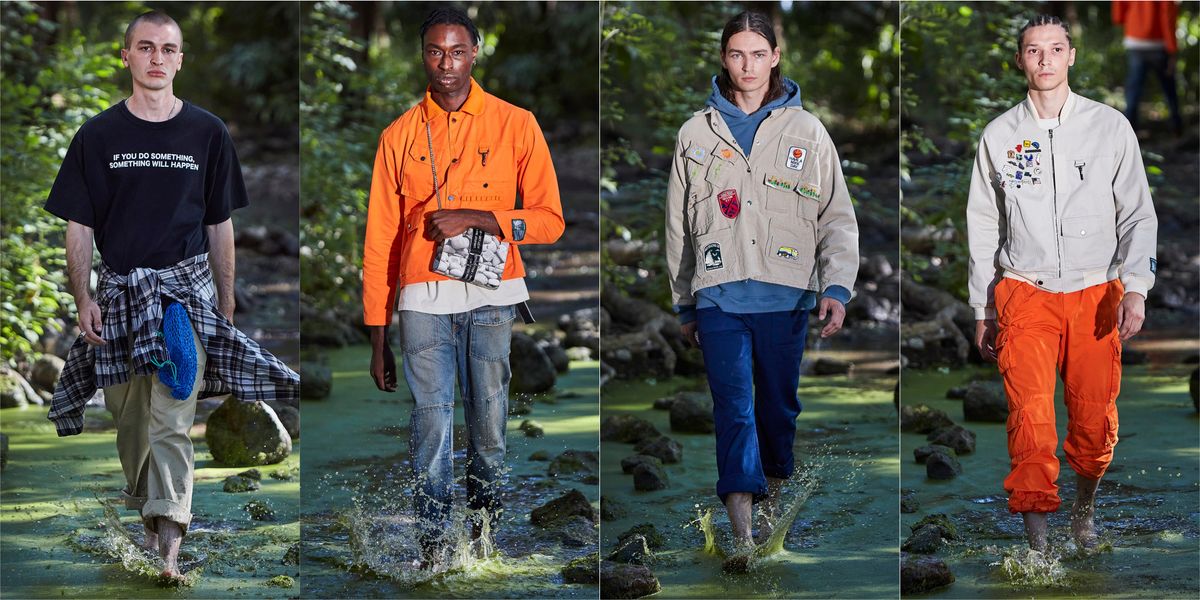 Reese Cooper Brought His Spring 2021 Show to the Great Outdoors

As someone whose design inspiration relies so much on being outside, it was an unsettling experience for Reese Cooper to be stuck indoors for so long back when the lockdowns took effect.

"I just hit that breaking point," Cooper tells PAPER over Zoom from LA. "I needed to be outside no matter what. So instead of going into the city, I would just get up with a roommate or a friend and we would drive for two hours until I could find fresh water to swim in."

That sense of exploration is how the CFDA/Vogue Fashion Fund runner-up would end up finding the location for the set of his Spring 2021 show, which was also filmed as part of Paris' men's digital fashion week. He assembled a group including Director Andre Bato and the team behind creative studio PlayLab Inc. to produce the outdoors-y show in the forest regions of Thousand Oaks, California.

The film, which premiered today on the Fédération de la Haute Couture et de la Mode's site, showed models walking and splashing their feet through a sinuous stream that acted as the event's runway. A small group of people, Cooper's family and closest friends, looked on from the banks of the river.

After Bato (the director) and Cooper scouted the location, PlayLab's Jeff Franklin provided them with a sketch that would help shape what the team was going for in terms of the layout.

"What I really liked is that even though we were dealing with a different location, the approach at least from a video perspective was a very stereotypical runway show format," Bato says. "The other thing that was really fun was that we had a cable cam that was running down from the beginning to the end of the runway. We really had to incorporate our video setup and implement our vision within the natural landscape."

For PlayLab, who also helped with the creative for Virgil Abloh's Spring 2020 Louis Vuitton show in Paris (remember those green monogrammed benches?), working in the fashion space offers a unique proposition you can't usually find in other industries.

"Fashion seems to have all the pieces that can connect," PlayLab's Archie Lee Coates IV says. "Everything is sort of theatrical and you can make up fucking anything and build commerce around it which is so cool. If done right — which is relatively rare in what we've seen — it is super fun and is actually productive for a lot of people outside of the brand too."

Before the models walked out, the film opened with a narrative intro by American rapper (and Cooper's friend) Vince Staples. "Archie and I were just in the studio with him like a week and a half ago just to get this intro for him because I love this idea," Cooper says. "The whole concept was the juxtaposition of location and theme, so it's a properly filmed runway show as if it's done in a nice place in Paris, but just doing it in the middle of the woods. It's like flipping the context of the actual space"

As for the collection (his first co-ed show), the clothes capture Cooper's signature vintage Americana-meets-great outdoors aesthetic he's cultivated since his debut in 2018. Camo prints depicting rocks and foliage from nearby lakes decorated jackets and trousers, while a hand-painted skirt and chore coat was done in collaboration with fine artist Juliet Johnstone.

"Ultimately in fashion, I think the industry itself is made up of a lot of peacocks to show you that you always have that 15-minute slot, whether it's in fashion week or with a show," Bato says. "It's super challenging, but when it's all said and done and you can actually make something great out of it, it's super satisfying."

Watch the full Spring 2021 show below.