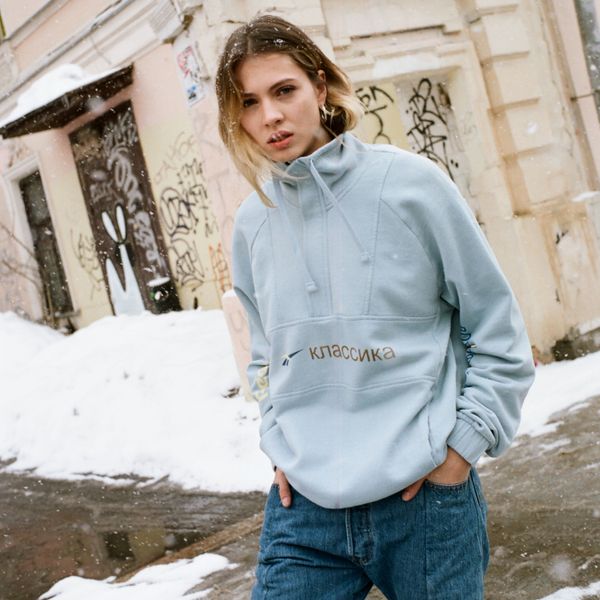 With the recent activewear embrace, several sneaker and sportswear brands have experienced unprecedented success. This has ushered in a range of truly excellent collaborations: Adidas x Alexander Wang, Adidas x Yohji Yamamoto, Adidas x Rick Owens... Okay, so the majority have been with Adidas, but now Reebok rightfully wants a slice of the cake too.

Teaming up with Russian based brand, Walk of Shame, the label has released a range of tracksuits, shorts, t-shirts, fanny packs, caps, and shoes — specifically, the Reebok Club C85s. The pieces have been intentionally designed to have a vintage "washed off" look. As Reebok told PAPER, the collection was to "transfer the aesthetics of legendary Reebok garments, mixing it with the Walk of Shame brand image."

The word "Classic" is also written in Cyrillic (КЛАССИКА) pieces, almost all of which are unisex. In fact, the only gender-specific piece, is the anorak sport dress. Drawing inspiration from Reebok's old classics from the 1990s, the collection claims David Lynch's "Twin Peaks" as inspiration.

Walk of Shame itself, available through Farfetch, feels like a hybrid of A.P.C, United Colors of Bennington, and Tribeca-based boutique La Garçonne. Naturally, their Instagram has the quasi-artsy "modernist" look that so many influencers adopt.

Pricing begins at $20, and ends at $145, and all the pieces will be available through on tsum.ru for the first 10 days.