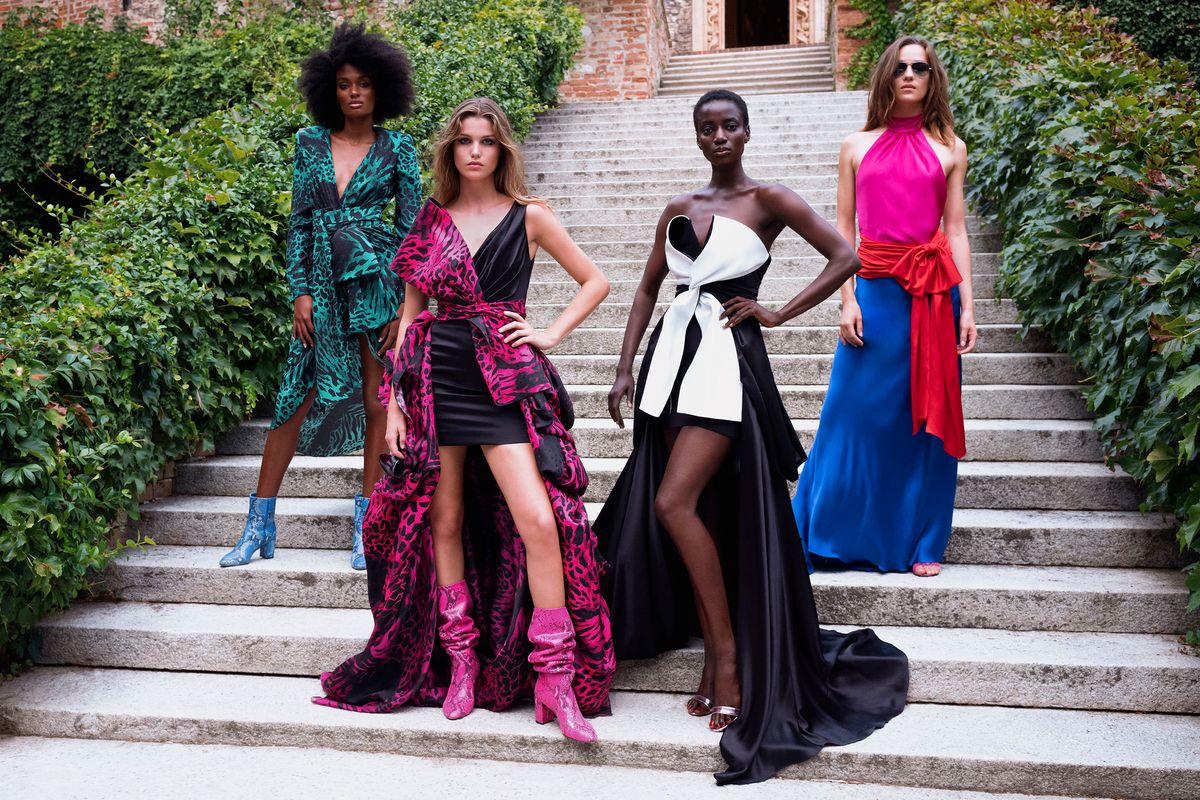 For the past several years, Gabriele "Bebe" Moratti has been a fixture on the Paris Fashion Week circuit, bringing the city a heavy dose of high-octane glamour and rock 'n' roll opulence through his label Redemption. This season, however, the designer timed his latest collection reveal with the Milan calendar, where he and his company are based.

In lieu of a live runway, Moratti opted to present his Spring 2021 line through a short film shot in a lavish mansion and garden in the Lombardy countryside. The models stroll around in a mix of mannish tailoring and hyper-feminine flourishes. Boxy blazers, giant bows and elegant trains in electric blues and shocking pinks conjure the familiar rebellious energy Redemption is known for.

Moratti aptly named this collection "Day at the Races" after Queen's 1976 album, a follow-up to last season's "A Night at the Opera," after imagining a figurative scenario where a group of punks would hit the Royal Ascot races. The soundtrack to the video was composed by Moratti himself, a fitting move given he's long been vocal about the influence of rock 'n' roll in his collections.

Of course, a conversation about Redemption wouldn't be complete without the added layers of sustainability and philanthropy — the brand continues to commit donating half of all profits to charity organizations, and it has incorporated materials like recycled denim, organic cottons and biodegradable vegan leathers in past collections.

For this outing, Moratti continued on that same track by looking at the kinds of embellishments they used for embroidery (sequins made with recycled plastics) and using FSC certified viscose in order to reduce the impact on the world's forests. He also teamed up with Aera on a footwear capsule made of vegan leather.

"The [sequin] supplier told us that we are the only ones that actually ordered them this season, and we're the first ones to use them," he reveals. "That's a point of pride for me, but also a point of frustration for me. I sincerely hope that after this collection, and after the fact that we bring it to the forefront, that many others will use it, because that's how we create that lasting change."

According to the brand, sustainability does not diminish the "sophisticated" ante, but rather augments it. From afar, it's a unique proposition in that most sustainable-oriented fashion brands typically skew towards daywear pieces or luxe-casual pieces. Not Redemption — the clothes unapologetically bold and often-times flashy, turning old connotations of sustainable fashion being "safe" on its head.

Equally as daring as the clothes are the women that wear it, with Lady Gaga, Katy Perry and Halsey among its devotees. Celebrity quotient aside, Redemption is still first and foremost about pushing the boundaries of responsible business and holistic sustainability, and Moratti says they will continue to strive to make the smallest impact it can on the environment. .

"We have, now, an opportunity to rethink our waste," he says. "I think it should not only be an opportunity but a duty, because we're all sharing the same planet. We're not really taking good care of it. We're not taking care of each other. I see a lot of division, and hate, and disrespect of each other and this beautiful planet that we should treat as a home, and not as a free-for-all supermarket where you just grab shit that you don't need. So, I'm looking forward to doing my best to try to present to the world that there's a different way of doing things."