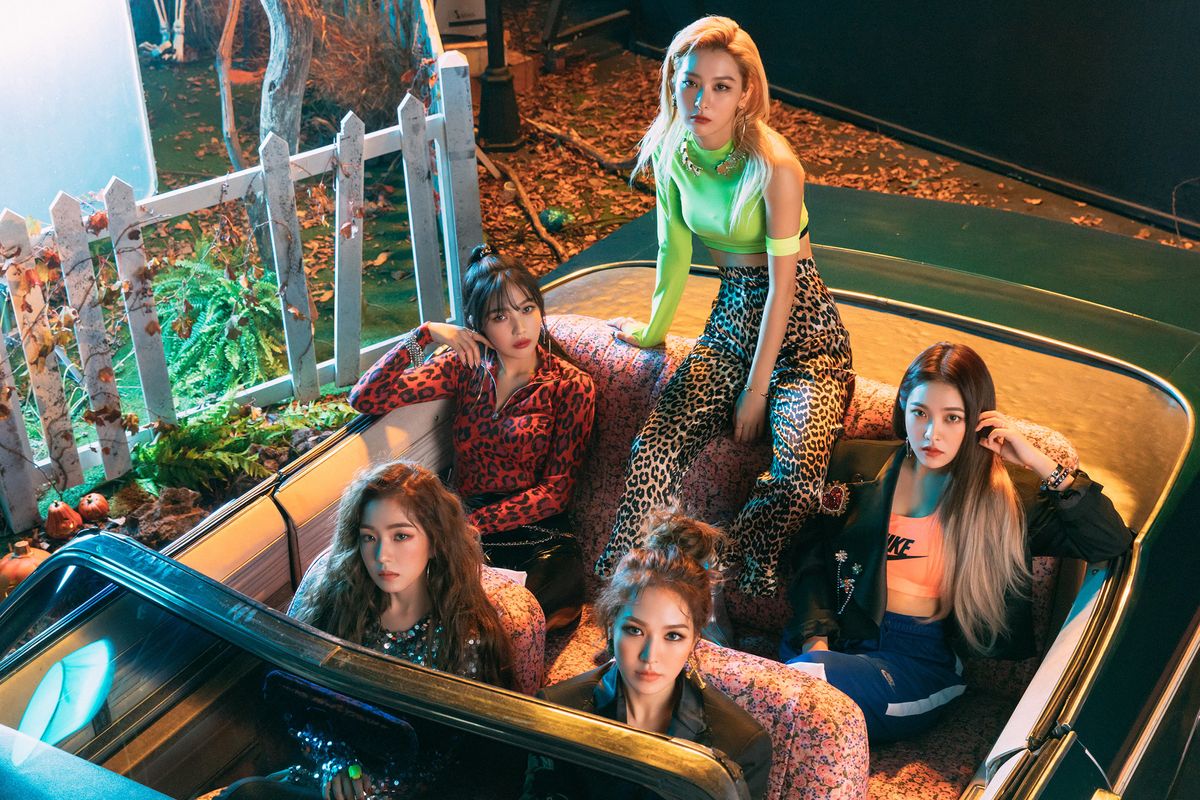 In a world filled with werewolves, witches, and bad boys, five girls step up to the plate to knock them back in their place. Irene, Seulgi, Wendy, Joy, and Yeri make up one of the most popular K-pop girl groups in the world: Red Velvet For the past four years, the group has represented an unstoppable force of girl power, positivity, and pop magic.

The liner notes for debut single "Happiness" describe Red Velvet's sound as the midpoint between the "vibrant and captivating color red" and the "feminine and soft velvet." Their "red" singles, like "Rookie," are typically shimmery, upbeat pop, while "velvet" tracks, like "Automatic," show their smoother, more sensual side. The ability to float from surfer rock to R&B to pop has garnered Red Velvet a global fanbase, fondly referred to as ReVeluv.

"The fact that Red Velvet can pull off so many different genres of music is our biggest charm," Seulgi tells PAPER, drawing a comparison between "RBB" and "Power Up," the group's fruity electro-pop single released over the summer. "When we were promoting 'Power Up,' I really enjoyed the bright, lively and summery song. Now that we've released 'RBB,' I like this type of powerful, femme fatale concept. The fact that we can change up our music styles and concepts just like the seasons change makes everything new and fresh every single time."

The group had a busy 2018: they released four albums, debuted in Japan, embarked on their second international tour and achieved multiple number ones on the Billboard charts. This year looks to be just as thrilling as Red Velvet preps to bring their international "REDMARE" tour stateside this month, making them one of the first K-pop girl groups to hold their own multi-stop tour in the U.S. in three years.

A portmanteau of the words 'red' and 'nightmare,' "REDMARE" promises to immerse fans into Red Velvet's sweet yet spooky imagined dreamscape. The six-date tour sees Red Velvet performing in theaters and auditoriums in Los Angeles, Dallas, Miami, Chicago and New York. Tickets to the concerts sold out instantaneously, with a secondary date added in Los Angeles to meet the overwhelming demand. The group has performed stateside before, including a sold-out show in Chicago and a performance at KCON New York, one of the biggest Korean wave conventions in the U.S., last year. While male K-pop groups have largely held the monopoly on performing in America for the last three years, Red Velvet's ticket sales alone are not only indicative of their own popularity but also exemplify the demand for female group concerts too.

"We have so much in store for them," the members say excitedly. "Because we don't get too many opportunities to go to the states, we're most excited about meeting and having fun with our U.S. fans!"

The group's latest single, "RBB," from the album of the same name, showcases the edginess they bring to the K-pop industry, which characteristically pigeonholes its female acts into traditionally cute or sexy identities to sell records. An acronym for "really bad boy," "RBB" is a smooth, brass-heavy dance track that is punctuated with high pitched screams to keep listeners on their toes. Its music video draws inspiration from classic horror films with graveyard dancing, allusions to The Shining, and the members glaring at the viewer from the mouth of a large wolf. Where other acts would stray away from horror, Red Velvet loves to blur the line between cute and creepy. "RBB" isn't even their first nightmare-themed music video; the video for 2017 track "Peek-A-Boo" depicted the members as serial killers who lure a pizza delivery boy into their home before killing him.

"When I first heard the song, I was pretty surprised to hear the super high notes and the dolphin-like high pitched scream," jokes Wendy. "The entire song itself is pretty high, so it really left a strong impression on me vocally." She explains that it's become her favorite track on the album. "It's not just the title track, but also really encapsulates this album's concept, and we had so much fun with it."

Upon release in America, RBB shot straight to number one on the Billboard Heatseekers Albums chart, with its eponymous single taking number one on the Billboard Digital Songs Chart. Other tracks on the record also illuminate a different facet of Red Velvet; saccharine pop "Butterflies" is Yeri's favorite because of the synchronized, butterfly wing move in its choreography, while Irene enjoys the members' sumptuous harmonies on R&B track "So Good," because, she says, "You can see how much Red Velvet has grown and matured vocally."

It's not just their vocals that have grown up. While a typical Red Velvet song features an upbeat melody and glossy vocals, the group breaks convention with their lyrics which advocate for change, discuss typically taboo topics, and utilize double entendres to reveal a more risqué subtext. The most risqué track on RBB, "Sassy Me," is unapologetically suggestive as it meshes sexy vocal fry with a hip-swinging backbeat, but its lyrics are what elevates the rollicking song into an empowering anthem promoting self-acceptance. "I can do anything / Inside me is the universe / When the sun wakes up / the world is mine," the members sing. "I'm going to follow my time / I won't be shaken / I trust myself."

This isn't the first time Red Velvet has advocated for self-confidence and love either; their debut single "Happiness" centered on the secret to happiness being optimism and love rather than riches. Other tracks in their discography openly explore depression ("All Right"), loss ("Rose Scent Breeze"), anxiety ("You Better Know"), and standing up to men who don't treat them with respect ("Bad Boy"). Red Velvet often takes on a protective, confidant role for their fans, and their lyrics, while dealing with dark material, encourage positivity.

"We all want to be the type of role models that give confidence to anyone who listens to our music," says Joy. "It's interesting because I could feel myself getting more confident the more I listened and sang ["Sassy Me"] while recording. I really hope that Red Velvet's music encourages people to be confident and strong, and just love themselves."

In return, the love Red Velvet receives from their fans inspires them to keep breaking boundaries with their music. Though the hit singles and catchy choreography definitely contribute, the group largely credits the success they've achieved in the U.S. so far to their fans who love and share their music.

"It's all because of [ReVeluv] that we've made it this far," confesses Irene. "We never take your love and support for granted, and it's what moves us forward. We'll never stop working hard for you guys!"