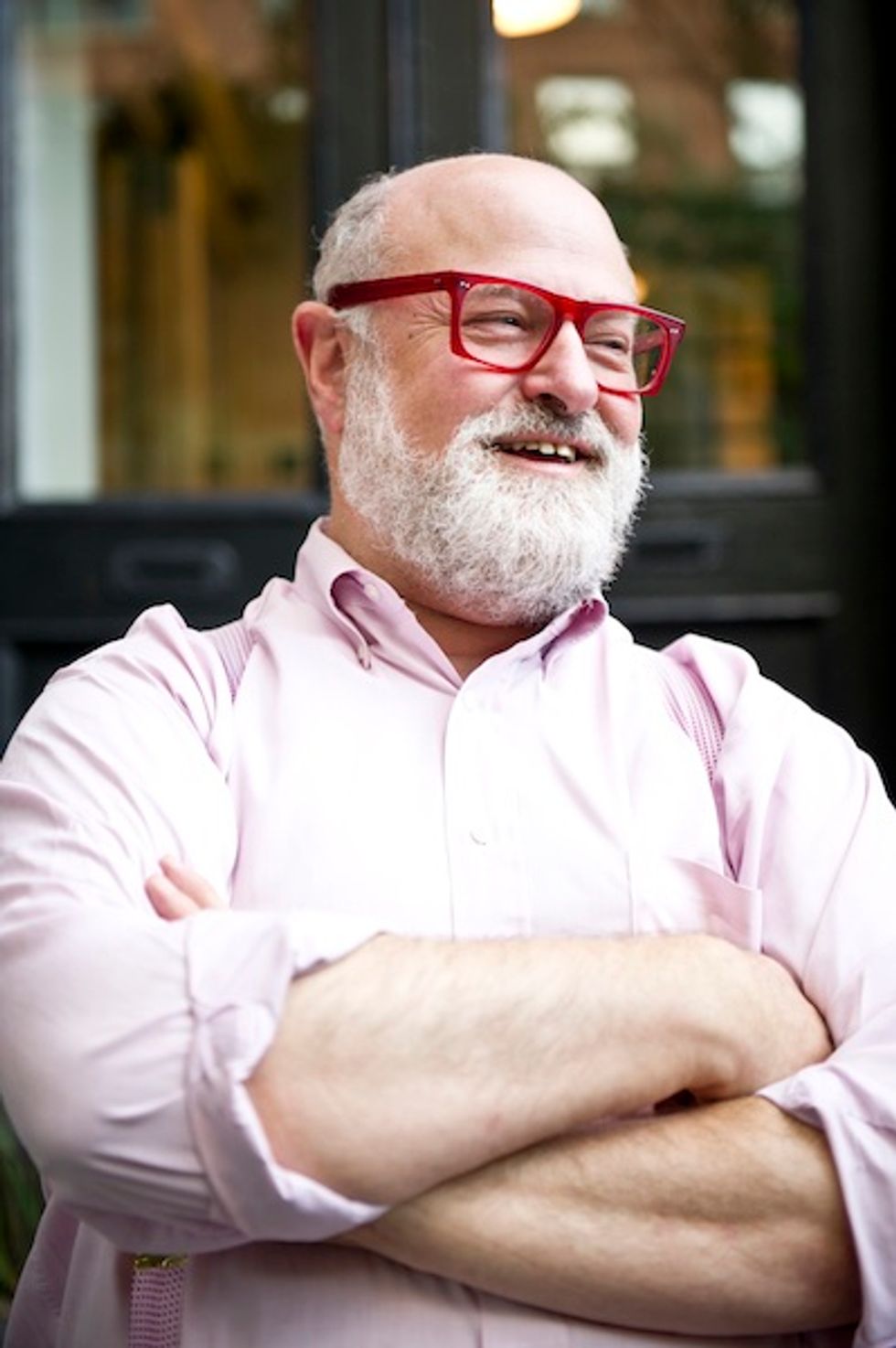 The bear-like Jewish guy with the large glasses, always color-coordinated with his shirt, standing on Hudson Street? That's Ed Schoenfeld, seasoned restaurateur, expert on Chinese cuisine, and right now, wrangler of the hottest seats in the city. His restaurant, Red Farm, is so hot that a line snakes around the corner at night, and people continually crowd the doorway even during the day when it isn't open. I sat down with "Eddie" to talk about that unending queue, his early days in the biz, and the rampant rumors about Red Farm's expansion.

Tell me about when you got your start in the business.
I started at the top, at Uncle Tai's Hunan Yuan, a four-star Chinese restaurant. I was in my early twenties, and there I was at the front door. As a captain/headwaiter in the 1970's I got to the point where I was making $2,000 a week in cash gratuities. It was twenty-four months after I graduated from high school; my hair was out to here and my beard down to there. I definitely looked like a hippie. My employer, David Keh, didn't ask me to cut my hair or beard, but he did put me in a tuxedo. And he had very little taste so he put me in a blue-patterned polyester tuxedo.

Oh my Lord.
With fake velvet lapels and a blue ruffled shirt and a bow tie.

Why don't you think there is a four-star Chinese restaurant in NY today?
The staff doesn't exist and the ingredients don't exist. And the public doesn't know what it is. They don't demand it and the critics don't understand it. A great Chinese chef has no incentive to come to this part of the world. There is a lot of money in Asia, and chefs are appreciated and they can make twice as much money there than they can here. Why would they come here? I mean, it would be like being married to a guy who doesn't want to have sex with you. What for? There's no reason for it.

What's the average wait for a table at Red Farm right now?
It gets to two hours very fast. On the weekends you'd better be here at 5:00pm. And by the time we hit 7:30pm, the wait is often longer.

How many people are you turning away? And how many covers are you doing in the meantime?
Well, we have about 40 seats and the other night I did 199 covers. A week ago Saturday - we're open for brunch on Saturday - we did 360 meals combined lunch and dinner. So I turned the room nine times.

So how many people per night are out of luck?
About 500.

500 per night?
There are nights that we turn away only 250. And we've had a few nights that we've turned away 800. We've been turning away two or three thousand a week, even before the New York Times review. I tend to exaggerate a little but I don't think I'm exaggerating this here.

It takes a brave man to deal with that line.... How do you work it without pissing people off?
It's not just the line. It's the phone and it's the door it's.... you know, the Japanese have this wonderful word, it's 'omotenashi,' it's a word to describe the way that you feel when you give selfless hospitality to people. There is some kind of higher spiritual good that comes out of treating people well and that combined with a nice place is what makes a really good restaurant. And in order to do the best that you can, you talk to people in that kind of way and in a very genuine manner. Last night by 6:30pm I had 30 parties on my wait list. About 7:45pm, a man comes in...it was the health department. He wanted to sit at a table for four for 2 Â½ hours. I had 25 parties I had to blow off! So I gave them my card, said, 'I'm really sorry, the health department came in and we weren't able to process the line like usual. I can't accommodate you, so here's my card. Please call me and I'll actually make a reservation for you and I'll buy you an appetizer.' Those are opportunities to make that person into a better customer than they would be normally. The problem is that the business is so relentless, so sometimes it's intense and hard. There are some nights that I'm just matter-of-fact and some people walk away saying, 'Oh he was an imperious asshole.' And, you know what? I probably was.

[We are interrupted by customers walking in hoping to have lunch.]

How many times a day do you get that?
And there are more people right behind them...

Not yet? Or is that a never?
It better not be 'never' because we're moving downstairs.

I was going to say 'rumor has it.' When is that happening?
Well, we're taking over the space. You shouldn't write about it because I don't know if the people downstairs know, but then again, I don't think they'll be reading you anyway. We've actually taken over the space legally. It's our space, but part of the deal is that we've rented it back to them for three months. So we take it over June 1st. It's going to take us a few months to do it over. So by September 1st, middle of August, we'll have that space.

How many seats do you think it'll have?
None.

None?
It's going to be kitchen space and a bar. Maybe a lounge, we're not quite sure about that.

But there will be nowhere for people to wash their clothes anymore in this neighborhood. The West Village is going stink like B.O.!
Well, we're not sure but we're going to keep two washing machines if we can.

Oh, how fun. Just as dÃ©cor?
If we're keeping them, we're gonna use them. I'll have a Chinese Laundromat! And we'll probably keep the storefront. It will say, 'laundry.' I actually would like to have the bar hidden in the back, with the kitchen in the front. Right now the reason we don't do lunch is that we're so busy at night and our kitchen is so small, and we have very little storage space. And that's the same problem for take-out. So the extra space will increase our cooking capacity. That will give us what we need in order to do lunch or take-out. And take-out was the whole idea of Red Farm in the first place.

So is that still going to happen?
I hope so. I just saw a restaurant yesterday that I want. We want to keep on doing restaurants.

Is that the Upper West Side Red Farm I heard about?
I'm not officially commenting on that. But if we were to do a restaurant on the Upper West Side, it would be one that included delivery. So we would then have the ability to deliver to the Lower West and the Upper West. I think we'll have a lot of opportunities anyway. The man who's in charge of all the real estate in Grand Central Station--the guy who created South Street Seaport--he's been bugging me to take a space. A space in Grand Central for us! But, we'll see. I can only do so much.