Recapping The Mad Men Recaps: Episode 4, "To Have and to Hold" 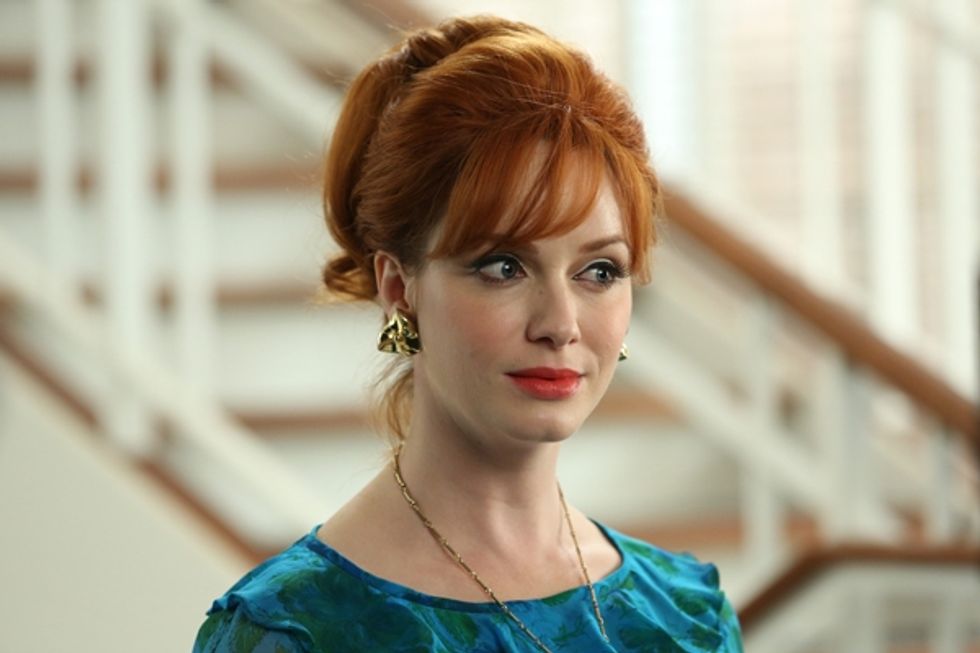 Each week PAPER will help you sort through your feelings about Mad Men by rounding up the best and brightest of the MM recaps. Read below so you can compare, contrast, and ponder while getting groped at the site that once was Electric Circus.

"Megan's continued success on THATH (anyone else notice that was her shorthand for her soap opera?) garnered her a love scene -- and a scathing rebuke from Don, whose ever-present double standard has him condemning his wife ('You kiss people for money') while slinking off for more trysts with Sylvia." -- Rolling Stone

"Don always rigs the game so that he's the injured party, even if he breaks the rules left and right. In his narcissistic mind, the betrayals he experiences always trump whatever sins he commits and wrongs he dishes out." -- Huffington Post

"Don's scorn toward Megan always centers on the fact that he's looking in the mirror." -- Salon

"And now we come back to Don, philandering, cruel and insecure, who once again displays galling hypocrisy." -- LA Times

"When [Don] pounces on the chance to point out that Megan kisses for money, it's a straight-up case of the pot calling the kettle a prostitute." -- EW


Is Don just a lost cause at this point?

"Watching Don toss and turn in the bed he has made himself has grown tiresome, six seasons, four episodes in." -- US News

"I find it somewhat harder to buy what 'Mad Men' is selling when it comes to Don's affairs. We've seen this so many times before; the affairs that offer no relief, the existential dread that leaves both partners ultimately feeling adrift, a woman whom Don ultimately views as yet another version of the whore who gave birth to him (we're four hours into the season, and we've seen Don give Sylvia money twice). This is an old cycle...At this point, it looks like Don doesn't want to learn from his many mistakes, despite ample opportunities to do so. It's not just that these kinds of plots are repetitive; it's just harder to feel sorry for a man who is this determined not to change any of the patterns that bring so much pain in their wake." -- Huffington Post

"As many have pointed out, a great deal of Mad Men revolves around assholes doing mean things. That does create drama, so who can fault in that formula? The problem is that we're six seasons in to this series now, and there are ways in which character development has paid off tremendously...and some extraordinarily frustrating ways it hasn't (um, Don). I know it's Matthew Weiner's "thing" to not have people grow or change because people really don't grow and change significantly in the real world, but what value is this to us viewers, six years into things?" -- Collider

"Can Don Draper ever find peace? That's a legitimate question, I guess, and one that's still very much in play on Mad Men. But...you have to ask if he even deserves it, or if by this point we should care if he achieves it. Is it me, or does the show itself seem somewhat bored with Don?" -- Vulture

"[In this episode] her self image as merely a sex object reinforced, [and] Joan reciprocates. Don is not the only one vulnerable to falling into old habits." -- US News

"[Kate] drags Joan out for, among other things, flirting with and kissing the first guys that come along -- at one point, Joan recreates many of my failed college nights on the town as she sits on the end of a sofa and sips her drink in a bored manner while Kate and some guy she picked up round second base just inches away. Fun!" -- TV Line


Does she need to change her ways?

"Here's what being the good, tolerant, dependable Joan had gotten her: Secretaries breaking her rules, and something much more humiliating -- Harry countering her authority and more or less calling her a whore in front of the other partners. What is the point of paying attention to the rules, once you realize the game is rigged against you?...She [has] to break free." -- Huffington Post

"Joan's position on that couch -- there but somewhat stiff and reluctant -- pretty much encapsulates her relationship to the changing times. Her mother is proud of her, and her friend Kate is deeply jealous...But Joan doesn't feel triumphant. She feels like 15 years later, they still treat her like a secretary. And from what we see in the office, it's even worse than that." -- Slate

"Her status as both office manager and partner have been undercut, mostly due to the kinds of unpleasant attitudes Harry gave voice to, but partly due to Joan's inability to change with the times." -- Huffington Post

"Joan is the consummate professional (to a fault, really, slipping into the world's oldest profession to better her standing) but it's not enough." -- Salon

"[Sylvia, Megan and Joan] were made to feel like prostitutes, or reminded of the transactional nature of their past or present relationships." -- Huffington Post

"I commend Mad Men producer Erin Levy for penning such a smart episode that revolved around the theory that for all the strides Mad Men's principal and supporting female characters have made in their professional and personal lives, at the end of the day, they're still viewed as little more than whores." -- Rolling Stone


At least we get to see more of Dawn!

"It's about time -- long past time, actually -- for the show to recognize how alone Dawn feels and helps us understand what she likes and doesn't like about her job. As the firm's only African-American, she is isolated and unable to take any number of things for granted...It was a relief, in a way, to see her talk so openly about her frustrations and fears with Nikki." -- Huffington Post

"Dawn finally got her own arc, appearing as more than just a background character hired because of a mistake, and had a couple of diner scenes with a friend who's getting married that essentially boiled down to 'these white men are out of control' and 'there are no good men around for me to marry.'" -- Collider

"Finally, we're able to go home with one of the show's few black characters. There were opportunities before..but with Dawn we snatch a glimpse of the black professional woman's Manhattan of 1968. It's a confusing terrain where the white secretaries might be using her, where passing a black friend in a mostly white area is oddly no reason to stop and talk, where women cry in the bathroom and men cry in the elevator." -- LA Times

"This is the first time [Dawn's] treated like a character in her own right as opposed to someone against whom Don or Peggy's racial views could be bounced. Mad Men has always opened itself up to flak for the way it has (or, more accurately, hasn't) grappled with race relations, so it's nice to see some effort on that front at least." -- EW

"Dawn's involvement in the fracas was meant to illuminate her character, but it didn't -- not really. Thanks to clumsy dialogue that informed rather than illuminated, it mostly gave us a sense of what it's like to work at Sterling Cooper Draper Pryce...rather than what it's like to be Dawn, seemingly the only African-American employee in a white workplace, and a kindhearted woman who seemingly spends every day tamping down a persistent fear of being ostracized or fired. I liked how Joan's impulsive decision to entrust Dawn with handling time cards and office supplies signaled an official separation from her own secretarial past, but this scene was ultimately about Joan, not Dawn. I can't really give Mad Men any points for trying to turn Dawn into a full-fledged character at this point -- not after they introduced her at the start of season five with such flourish that it seemed as if the season would have something to do with civil rights, then pretty much forgot all about her." -- Vulture


And is Peggy the new Don?

"Don listens in on Peggy's presentation, and is visibly crushed when she uses an acutely familiar phrase: 'If you don't like what they're saying, change the conversation.' Don first uttered these words in Season Three, only to be reminded of them again by Peggy in Season Four in the aftermath of losing Lucky Strike - perhaps a hint that one day she would take them as her own." -- Rolling Stone

"[Don's] curiosity is so great that he stoops to listening at the closed door while she's making her pitch. She tells the Heinz people, "If you don't like what they're saying, change the conversation" -- you devoted Mad Men fans will remember it as Don's own advice, parroted back to him by Pegs herself, just before he writes the "Why I Quit Tobacco" letter in Season 4. The student has become the philandering, boozing, self-hating teacher!" -- TV Line

"It's especially hard to tell if [Don is] honored or betrayed by Peggy ripping off one of his trademark sales lines: 'If you don't like what they're saying, change the conversation.' But the sight of the master standing outside the door eavesdropping on his former apprentice's rival pitch speaks volumes." -- EW


Blergh, no more Peggy and Stan!

"Sadface: No more awesome Peggy-Stan phone calls, at least not for a while." -- Huffington Post

"I really hope the ketchup poaching doesn't sour the relationship between Stan and Peggy. I was really enjoying their cross-agency friendship." -- EW

"I hope Stan's middle finger to Peggy doesn't signal that they won't talk on the phone anymore!" -- Vulture


But we did see swingers! (For real this time.)

"What was most entertaining about the dinner scene with Don, Megan, Arlene and Mel is that Megan didn't even understand what the older couple was proposing at first. It took her a while to grasp that they were swingers, and then she couldn't wait to get away from them and their offer of 'grass' and a 'chemistry experiment.' (I'm with Megan: Eyeewww)." -- Huffington Post

"It...ends with [Arlene] and [Mel] suggesting that the Drapers come over to "smoke some grass" and get (have sex) to know (have sex) each other (sexsexsex) better. Don's face rules in this scene, by the way." -- TV Line

"Don and Megan's dinner with her boss Mel and his wife is an interesting study in contrast. When the showbiz couple invite the pair of them back home for a good old-fashioned foursome, Don balks, amused. They laugh about it on the way home, but to our ears the laughter is hollow. After all, Mel and his wife have been together for 18 years, while Don and Megan already have a ticking time-bomb hiding under the tablecloth of their marriage. Maybe if Don were able to find a healthier way to get his sexual release, he wouldn't be up to his old coin tricks." -- EW


And finally, Mad Men gets meta.

"'I'm sure he's a man who plays many roles!' Thank you, Arlene, for participating in This Week in Mad Men Meta-commentary." -- Huffington Post

"I was starting to worry that every single episode of the sixth season of "Mad Men" would serve up Big, Obvious Themes and Giant, Flashing Symbols...There is that point when the subtext upstages the actual text to such an extent that it's hard to focus on the emotional center of a given scene." -- Salon