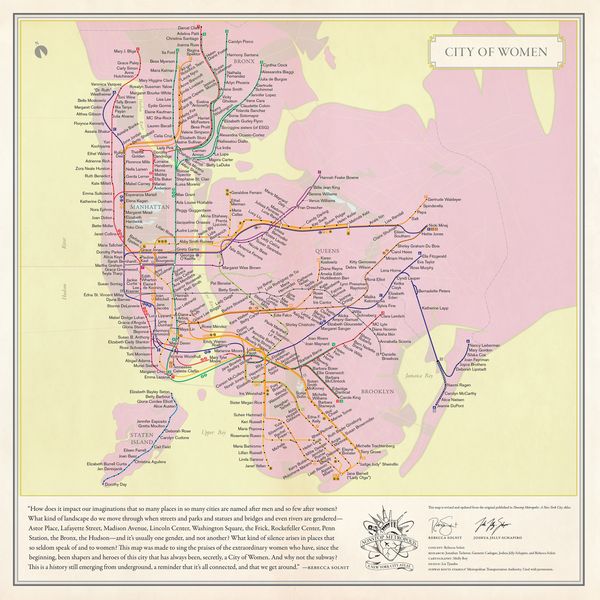 What if Every Subway Stop Was Named After a Woman?

"How does it impact our imaginations that so many places are named after men and so few after women?" This is one of the questions that informed activist and author Rebecca Solnit's latest project, "City of Women 2.0" a reimagined Manhattan subway map where each stop has been renamed after a woman.

Solnit, known for books like Men Explain Things to Me and Hope in the Dark, began creating original cartography in 2010, with her reimagined atlas of the San Francisco Bay Area, Infinite City. She repeated the project with New Orleans in 2013's Unfathomable City. In 2016, she took on New York City alongside Joshua Jelly-Shapiro, with Nonstop Metropolis, which maps the city through lenses of language, club culture and dance, radio stations, the Caribbean diaspora, wildlife, the cultural production of hip-hop, police violence and the Bronx fires of the '70s. (The book included the first edition of the "City of Women"map).

Related | Hardcore Honey: belle hooks Goes on the Down Low With Lil' Kim

Instead of 79th or 72nd street, you can grab the 1/2/3 at the Nora Ephron or Joan Didion stops. Instead of Union Square, the 4/5/6 trains converge with the L and the Q at Hannah Arendt station. Grace Jones sits between Alicia Keys and Georgia O'Keefe on the E train.

The lines that run through the Bronx, Brooklyn, Queens and Staten Island are notched by the names of daughters of the boroughs like Aaliyah, Shirley Chisholm, Foxy Brown, Ella Fitzgerald, Jennifer Lopez, Lena Horne, MC Lyte, Sonia Sotomayor, Christina Aguilera, and Barbara Streisand.

The map includes all legends you'd expect, as well as those we don't think about enough. Patti Smith is the 2nd avenue L stop, but the map also reminds us that Sojourner Truth lived in the a few stops away after freeing her son from slavery.

"City of Women" is now available as an individual print poster, in its "2.0" form. Since it was originally printed in Nonstop Metropolis, Solnit and Shapiro have updated the map with 69 new names, of women who've changed the world, or at least gotten recognition for doing so, since then.

Related | This Photographer Captured Aaliyah on the Cusp of Superstardom

Alexandria Ocasio-Cortez replaces the Queens' Hunts Point Avenue 6 stop. Her neighbor, Cardi B is over at the 174-175 Street B/D stop. Meanwhile, Fort Greene's Franklin A/C stop is labeled with the name of New Yorker writer and millennial bard Jia Tolentino.

"This map was made to sing the praises of the extraordinary women who have, since the beginning, been shapers and heroes of this city that has always been, secretly, a City of Women," Solnit says.

The City of Women 2.0 map is currently available as a poster at haymarketbooks.org.