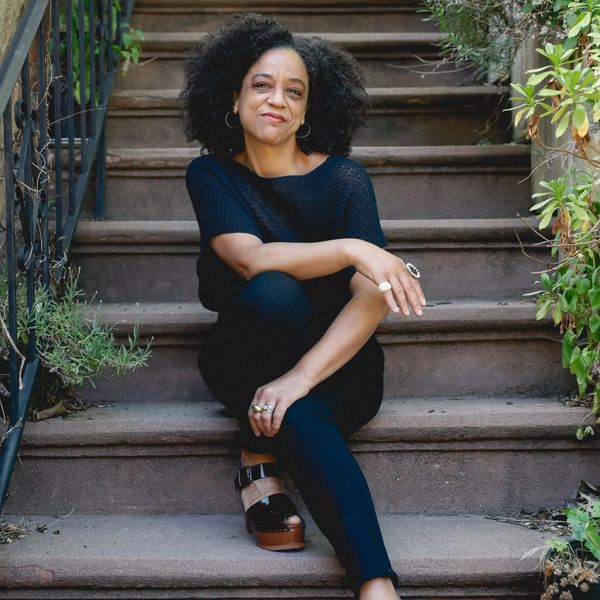 Rebecca Carroll was born in New Hampshire to a white mother and Black father before being adopted by a white family, making her the only Black person in both her family, and her town. Surviving the White Gaze is Carroll's memoir which, like life, is equal parts brutal and beautiful. Carroll, the former Managing Editor of PAPER, writes with incredible authority and insight about her life, sharing the pain of feeling marginalized, but also the joys of dancing in the grass a child and finding romance, often in the wrong places. Simply put, STWG is an incredible read.

Related | You Have the Right to Be Brilliant: Dr. Angela Davis

Below, we caught up with Carroll, who recently launched a podcast, "Billie Was a Black Woman," in collaboration with the award-winning Lee Daniels film The United States vs Billie Holiday.

It seems like an amazing time for your memoir to come out. Why did you decide to write it now?

Well, actually, I decided to write it about five years ago, after a series of events and conversations and op-ed pieces I wrote. Following the 2014 murder of Michael Brown in Ferguson, Missouri, my son asked if he and I would get shot because we are Black, and it unleashed a fury in me. I just started firing on all cylinders in my work as a writer, as a creative and maker of conversations and content, and I realized that I was simultaneously mining my own experiences to meet this fury. I always knew I was going to write my memoir, but every time I'd tried, it came out stilted and contrived. It took that unleashing, my own protective instinct toward my son, and the certainty that I had arrived at a place where I trusted my writing voice that allowed me to actually sit down and write it.

I know I'm probably not supposed to but I love the stories of you going to the disco as a kid. Are those fond memories or do they make you think your mother was insane?

LOL! That is such a Mickey question. Those first few minutes inside the disco the first night we went, when Kool & The Gang's "Celebration" came on and I just lost myself in the song, on the dancefloor of this real grown-up disco like on American Bandstand — the strobe lights flashing and dark, fluid movements all around me, the flow of my dress as I twirled, the uncanny ease of place for me, that was all pure joy. The next night, when an adult white man tried to pick me up, not so much.

You talked a bit in the book about going back to New Hampshire with Kofi. Do you ever see your teenaged friends or keep in touch with them?

Yes, absolutely — you may already know this about me, but I like to stay in touch with folks, for better or worse. I'm fascinated by our personal journeys and trajectories and the choices we make and don't make. We don't go up to NH so much anymore, but when Kofi was little, we visited regularly, and I would see old high school friends.

Where is your relationship at these days with your adoptive parents?

Tough. I have been in touch with my mom through the process of writing the book, and since its publication. She has always led with love and continues to believe so resolutely that love is all that matters, which, at this point, I have to give over to. I had thought that writing this book would somehow be a gift of sorts to my adoptive parents and siblings — insight into what it felt like to be a Black girl growing up in our family and small rural town, because why wouldn't they WANT to know? But it hasn't been received as a gift, and so if I can write this full excavation of my life, with as much radical compassion, truth and dignity as I possibly could, and they still can't see me? Then I have to let that be what it is.

You've sold the development rights to the book, any thoughts on what the film or tv project will look like? I hope it will include some of your great romantic adventures! Who can play you in the movie???

Well, it's for a limited TV series and my bar (not too high) is I May Destroy You, written and created by Michaela Coel, who also stars in it — to me it's just the most beautiful piece of television I've seen in at least a decade. It does what good memoir should — interrogates memory with grace and balance and curiosity and rage and empathy and humor. And brought to life cinematically, in nuanced and gorgeous visuals, that is just pure #GOALS for me with this adaptation. Who should play me? Not yet sure which chunk we're going to adapt for the series, and/or if we'll do flashbacks, but I'm right now inclined to think we'll do late teens through college, in which case I could see Amandla Stenberg or Yara Shahidi — love them both.

Where did things end up with the movie project of your mother's book that you worked on? Did it ever air? Was her book a success?

Does the incredible reception of this memoir make you want to write more autobiographical books?

I've always incorporated my own experience and insights and perspective into my writing across genres — I'm just excited to build on the response to STWG to do more of that.

Tell me about "The United States vs Billie Holiday" podcast you just launched.

It's an Audible original podcast I created and hosted in partnership with the Lee Daniels film The United States vs. Billie Holiday (presented by Hulu) — a four-part series that refracts and explores Black womanhood through the life and lens of Billie Holiday, featuring interviews with Andra Day (who gives an INSANE performance as Billie in the film — and, of course, just won a Golden Globe for it and will almost certainly win an Oscar), Laverne Cox (on what it means to be a "strong Black woman"), Mariah Carey (who does an amazing run on being an Aries), and Dr. Angela Davis (who is an actual living legend). Along with original narrative written by me, an original score composed by Matana Roberts, and a glorious, celebratory episode featuring interviews with Lee Daniels, Terry McMillan, Naomi Campbell and Brandee Younger. The entire suite drops on April 7, Billie's birthday!