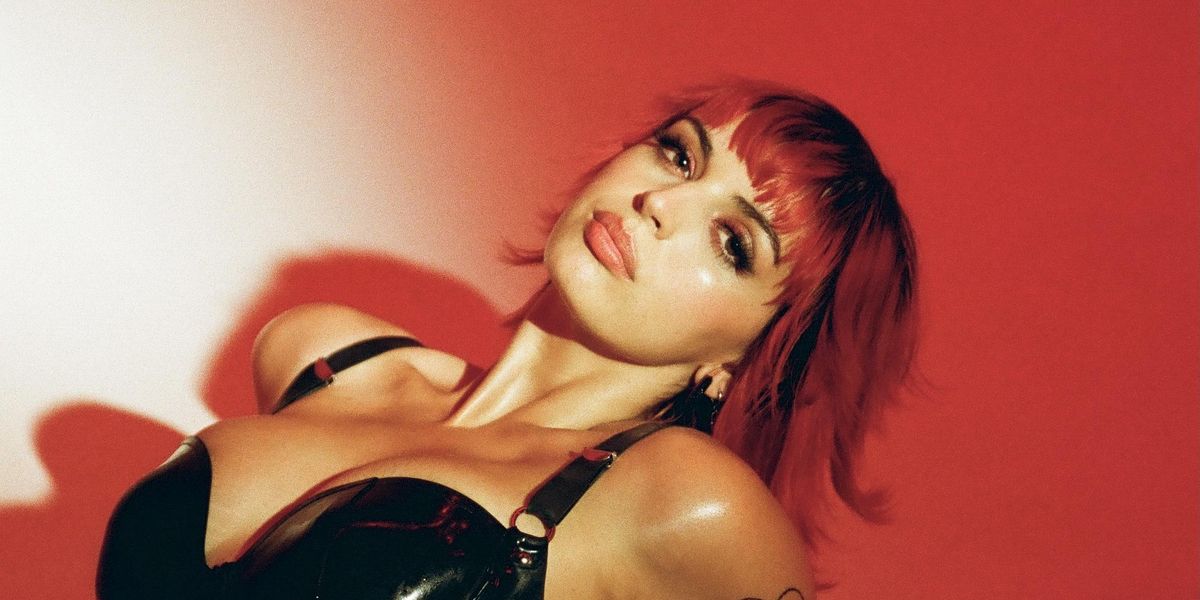 Having made a momentous, mid-pandemic comeback in a year that saw the singer identify as queer and reclaim her viral fame, Rebecca Black has finally dropped her first musical project in over a decade.

Rebecca Black Was Here, which features previously released singles, "Personal," "Worth It for the Feeling" and "Girlfriend," sees the artist pour over love lost and gained, all coated in a shimmering hyperpop glaze. From the anthemic glitter covered highs of "NGL" to the moodier tear-stained heartbreak of songs like "Blue," Black shows off an impressive range across the six-track EP, setting herself as an artist a world apart from that bright-eyed girl educating listeners on the weekdays over a decade ago.

"Not only does it feel like such an incredible emotional release to have what I've been working on for the past year and a half out in the world, now is the first time I feel like I've proved to myself I can really do this," Black says. "I have spent the past 10 years constantly questioning myself and asking myself if I was really able to ever overcome my own insecurities."

She continues, "Now looking at this project completely finished, I couldn't be more proud of what I have been able to create with some of the most talented and kind team I've known. Truth is, I couldn't have made this project without having experienced what I have in my past, and I am finally able to celebrate that for myself."

"Better In My Memory"

I felt really inclined to bring Ceci G and Micah [Jasper] together knowing how willing each of them were to take a risk — after writing with each of them separately for this project. Throughout the entirety of the writing for this record, I only continued to find more comfort in risk-taking myself — and "BIMM" is definitely one of the bigger risks on this project. I always knew this project would be rooted in pop, but I wanted to challenge myself and those I worked with to push the boundaries further. This song was one of the most chaotic and fun ones to write with Micah, Ceci and DCF, and I'm so thrilled with how thats paralleled in the song itself. The mosh pits for this song live will. be. epic.

"Personal" was one of the first songs I wrote for this project, when I really began diving deep into writing during March of 2020. I was back home in quarantine living in my mom's house just trying to make sense of some really intense heartbreak — both dealing with feelings of guilt and anger at the same time. Paris Carney, Micah Jasper and I have all worked together and known each other for a while now, and whatever came together over the course of making this song still fills a really special place in my heart. I think it has to do with the fact that I never gave up on this song, even though through out the process of finishing it, several people I played it for didn't see what I saw.

I was honestly really surprised when Marshall Vore hit me up to work together last year, considering from the outside looking in I felt like we had totally different worlds — but soon after meeting him for the first time and understanding how much music taste we actually had in common, I was stoked to create together. Marshall had started working with a producer/artist called Glitch Gum, whose Kyoto cover I was obsessed with. Marshall played me a beat of Luke's called "NGL" and we both thought the title really fit the story I wanted to tell. "NGL" is a side of me that doesn't come out often, but was really empowering to cap off the writing for this project with — after many very emotionally vulnerable moments and songs.

To be honest, I still have a hard time listening to "Blue" some days. This song was written in a really difficult and immediate moment for me — the day I essentially realized something I'd tried my best to fight for was over — and it was my fault. I had a session that same day planned with Paris Carney, one of the only people I feel most comfortable being honest with, and I tried to use writing this song as a way to unpack my feelings. I'm really grateful for Paris and for all of the writers who allow themselves to be emotional catch-alls for moments like those — writing about the real shit happening to you and not just telling a story is taxing throughout the entire process. But I am so glad we were able to finish this and I hope someone listening will feel heard like I needed at the time.

"Worth It for the Feeling"

I was so thrilled to see so many people reacting so well for this song when it dropped — because leading up to the release I was particularly nervous for this song. I think it's easy to overwhelm myself with pressure, but in the end I am just so proud of the visuals Weston [Allen] and I created for this song and everything revolving around the release. This song was so much fun to create on Zoom with Paris, Rachel Kanner and Josh Murty, as well. I think I spent a good two hours in my bedroom recording harmonies just because it felt that good to sing in such a dreary time.

I couldn't have ever expected the reaction that "Girlfriend" would get. It is the most beautiful thing to me to see people feel so much joy through this song about happy gay love. I am so proud of how queer this project is as a whole and seeing this song reach so many queer women and people is more than anything I could have ever asked for. I am so grateful for what this little gay song has meant for me and so many others.