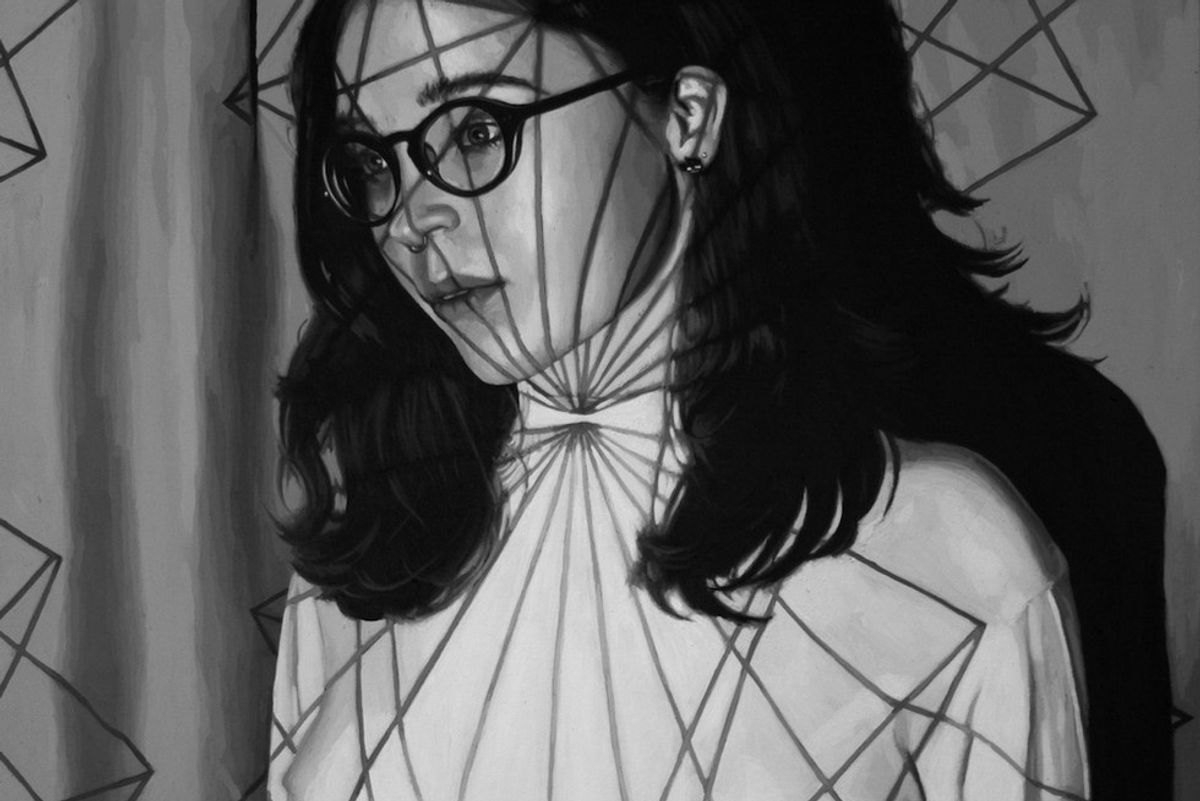 Rebecca Adams' medium of choice wasn't always painting. The Providence, RI-based artist began as a photography major at the Rhode Island School of Design (RISD). She was inspired by film and portraiture but didn't pick up a brush until after she graduated with her BFA in photography in 2006. We'd say it was a smart move -- Adams' incredible photorealistic black and white portraits of women have garnered praise from art critics, magazines, and gallerists alike.

Though Adams started out using found images as inspiration -- an early series was based on vintage stock photography of women holding tissues -- she discovered that taking her own photos offered her both more control and creative possibilities in her work. Employing that photography education, Adams now creates her paintings from large-scale photo portraits of women she shoots in her Providence studio.

We talked to Adams about jumping mediums from photos to paintings, the impact of Marilyn Minter, and maybe someday experimenting with men.

Your background is in photography. What made you make the transition to painting? Were black & white portraits a part of your youth?

I always made art growing up - there's a lot of artists in my family. I didn't start taking photo classes until high school. l loved being in the darkroom and the whole printing process, so majoring in photography seemed like a natural transition. I never stopped painting and drawing throughout school, but didn't ever really think about how to bring all my ideas together. When I started painting more seriously after RISD, I was using a lot of film stills and vintage stock imagery for reference. It started to feel very stale at some point, I wasn't close enough to it. And it just dawned on me, why am I not creating my own images to work with? Why have I always kept these mediums so separated? It all of a sudden made sense.

So considering your paintings dwell in the photorealistic, are there certain photographers or artists who particularly inform your work? Who or what are your influences?

Cindy Sherman was one of the first artists I really felt a connection to--obviously to her visual aesthetic, but also the way that her photographs gave a sense of a larger story outside the frame. Guy Bourdin is another photographer who got me more interested in including portraiture in these "worlds" I was trying to create. As far as transitioning between photography and painting, Marilyn Minter was important in seeing that both mediums could work together and for each other. Photorealistic painting became very intriguing, very lush and dramatic.

Film has obviously had a huge influence on my work, in finding ways to explore dramatic "film noir" lighting and unique ways of framing shots. Fassbinder, Bergman, Argento: they all opened up this exciting and intense world of imagery for me.

Your paintings are mainly of women. How do you select your models? Do you think you'll ever paint men?

Yes, I would like to start integrating men into my work more. I think painting women just felt more natural, as a woman. Pretty much all of my models are friends, and maybe that's partially for my own comfort. I actually find the photography part of the process the hardest, as it's the only part that actually relies on other people's input. The actual painting process is very solitary. 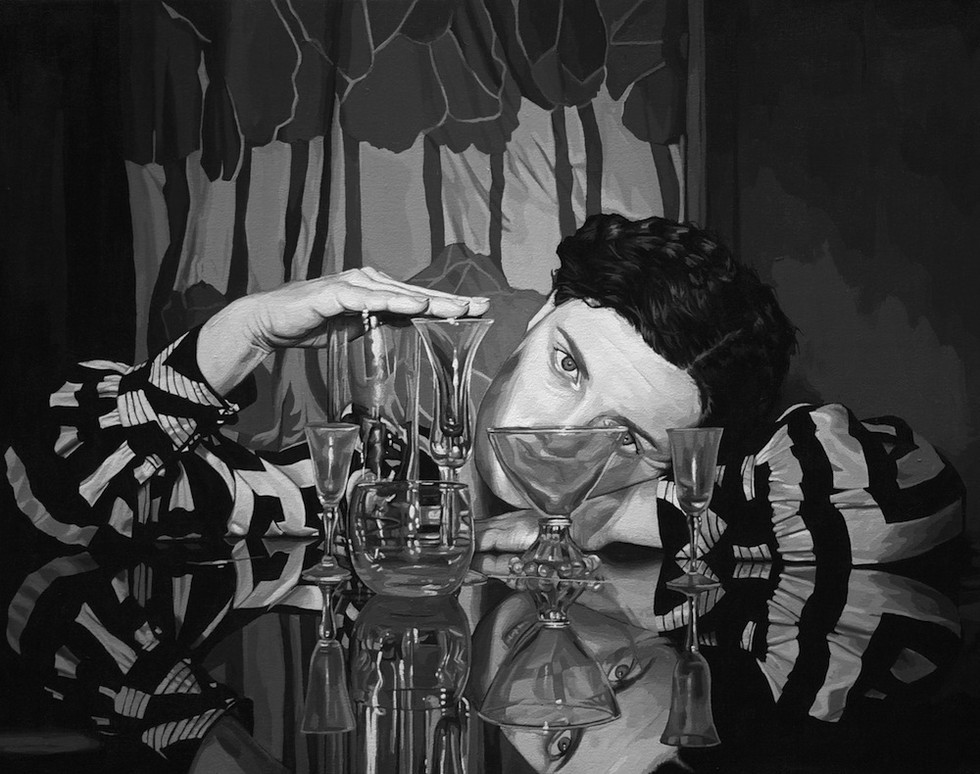 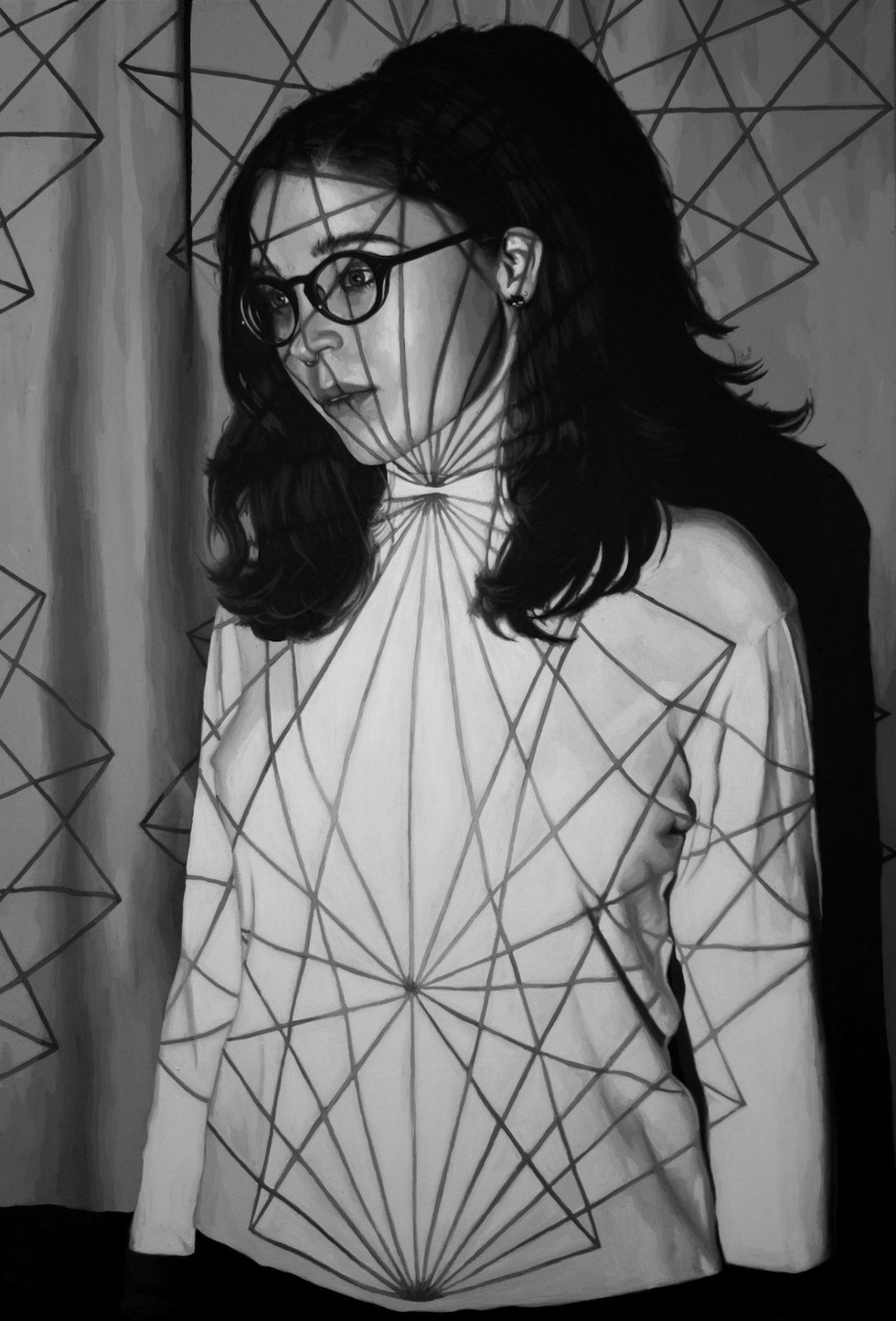 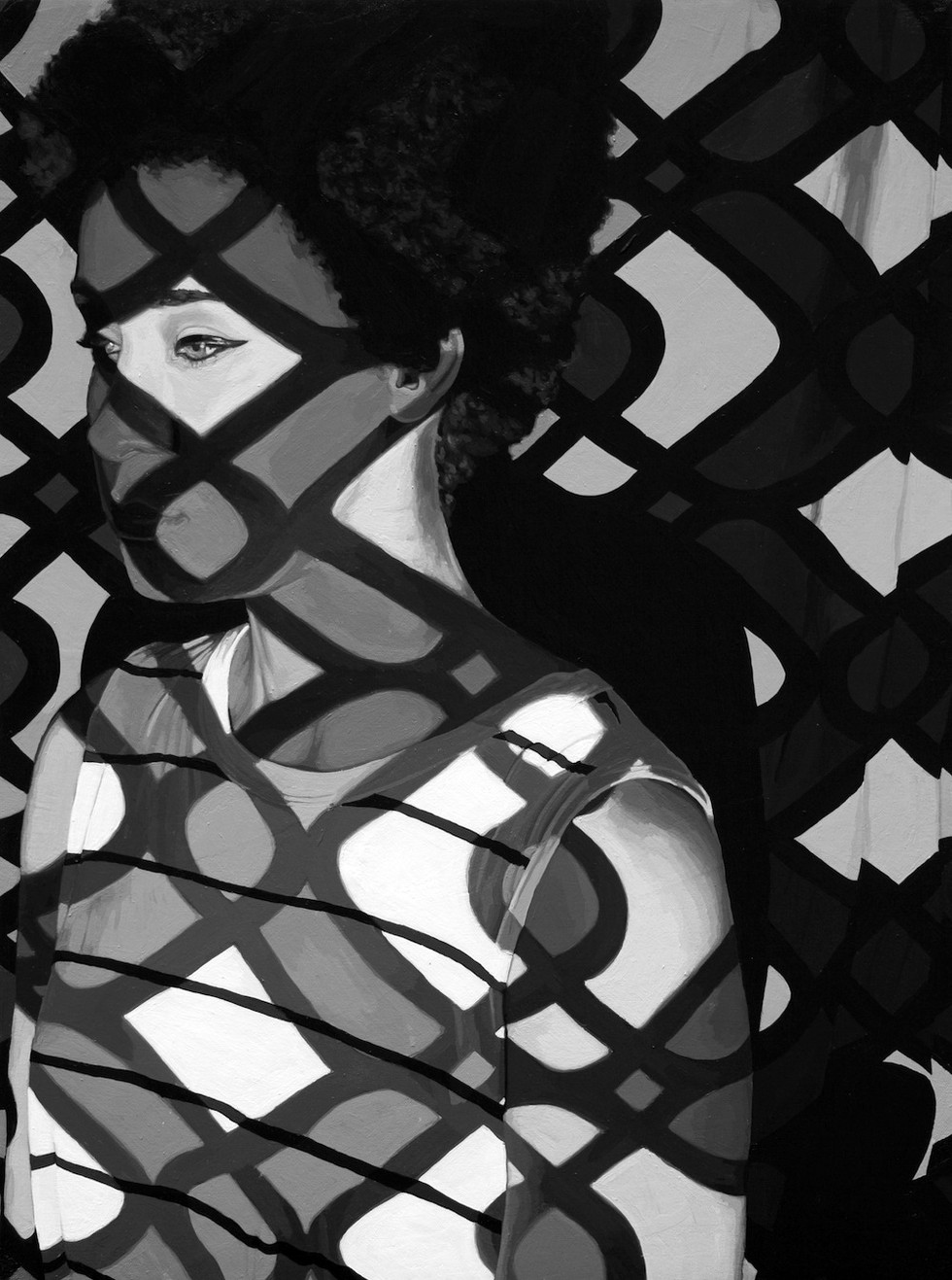 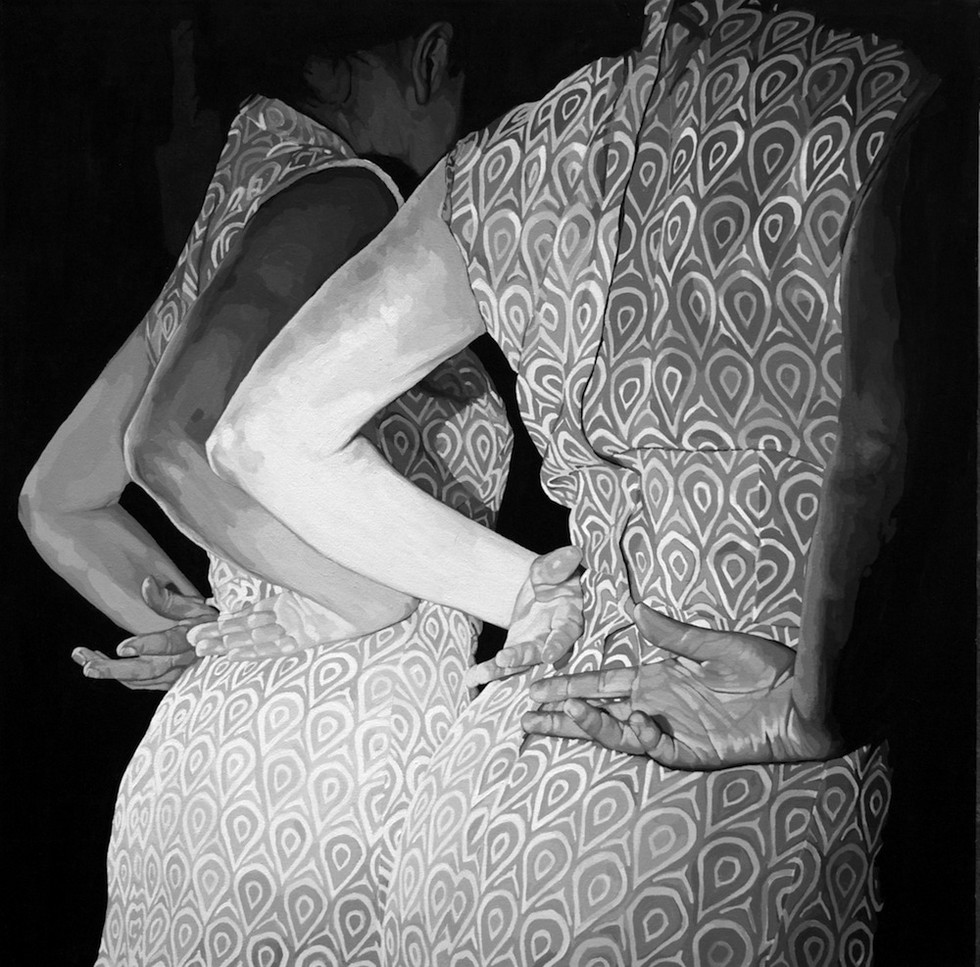 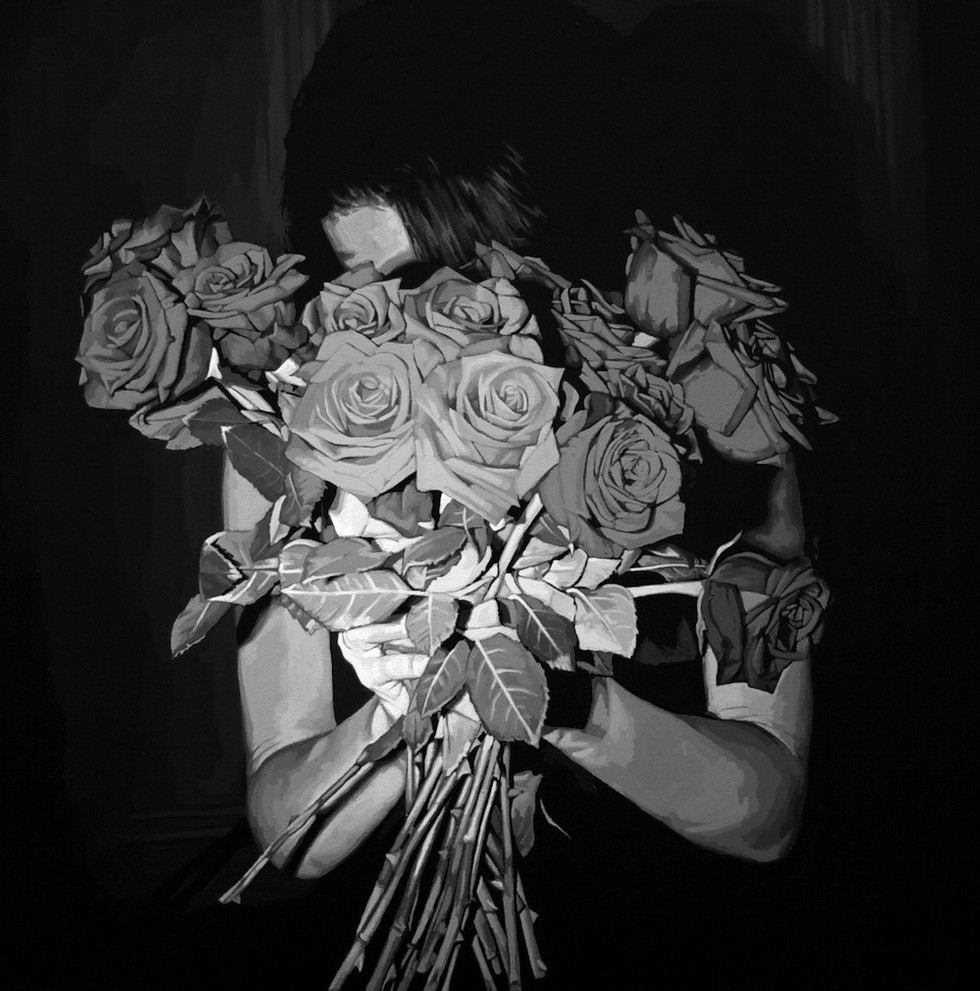 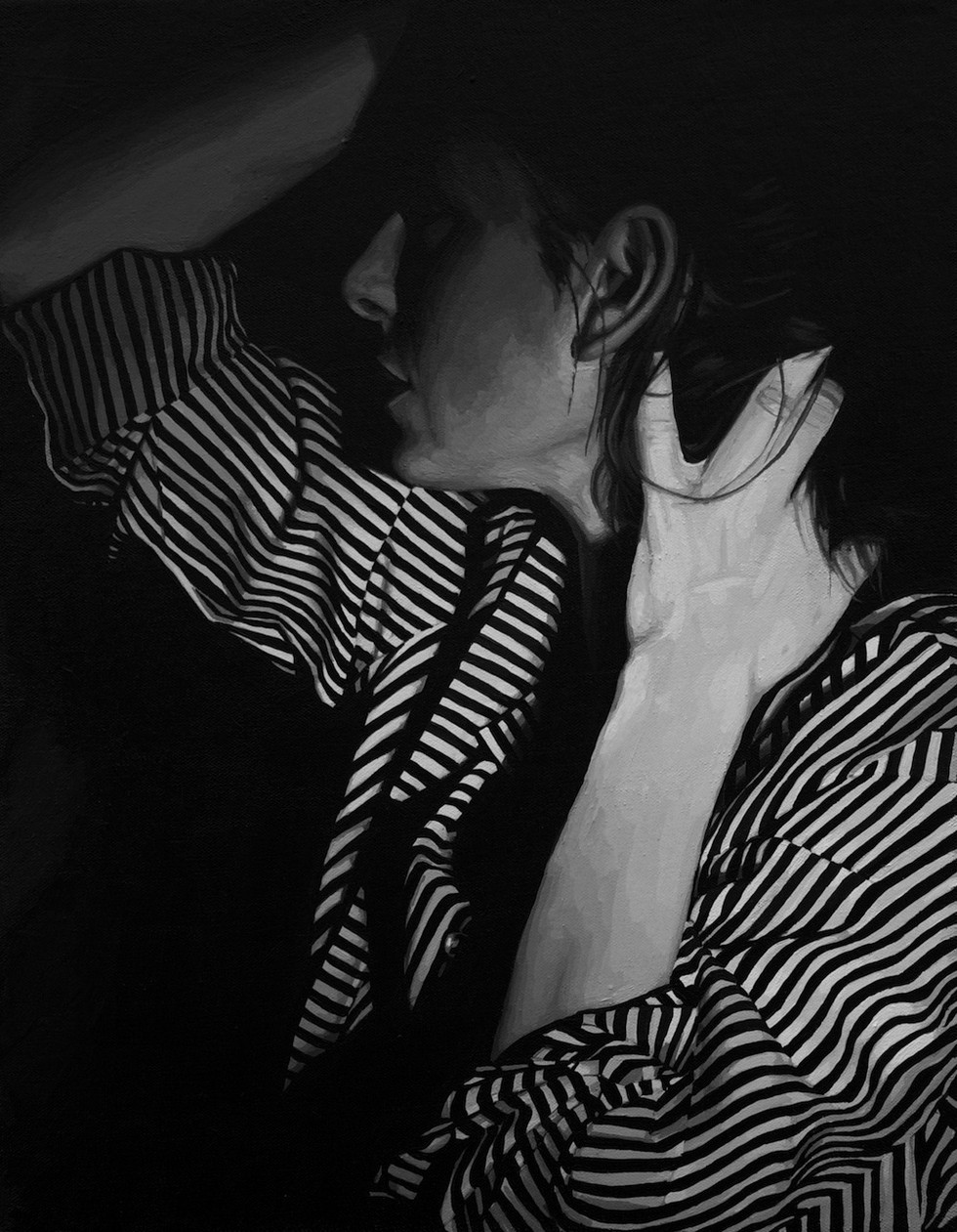 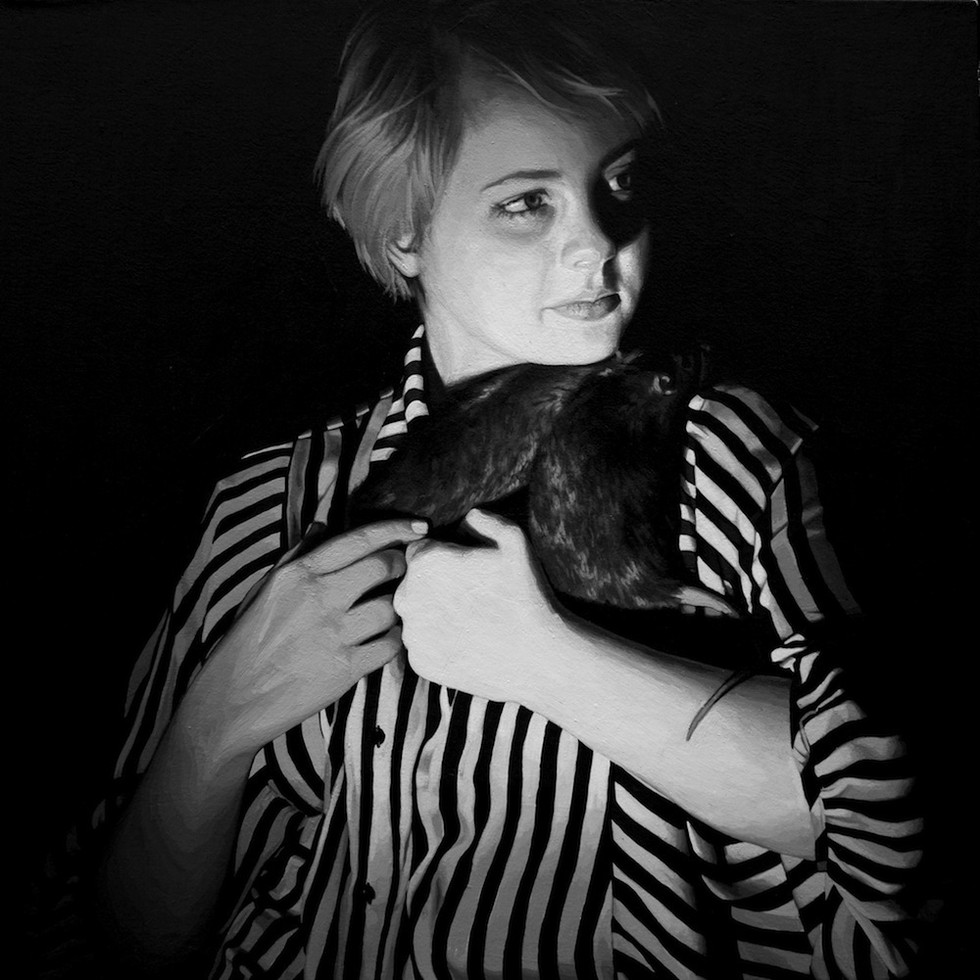 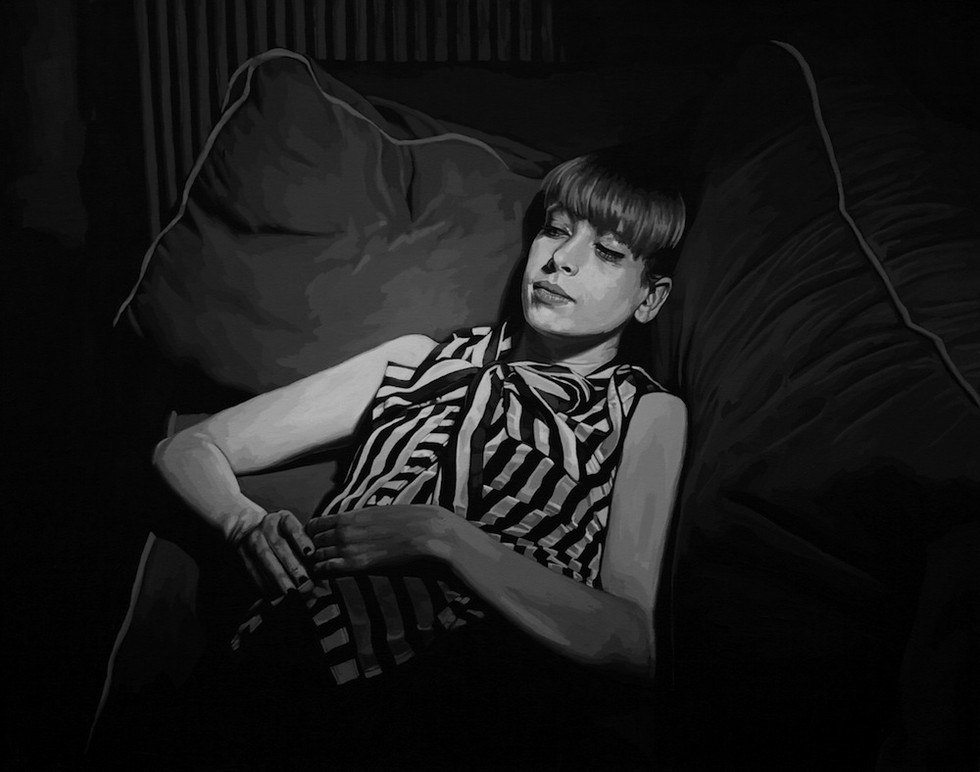 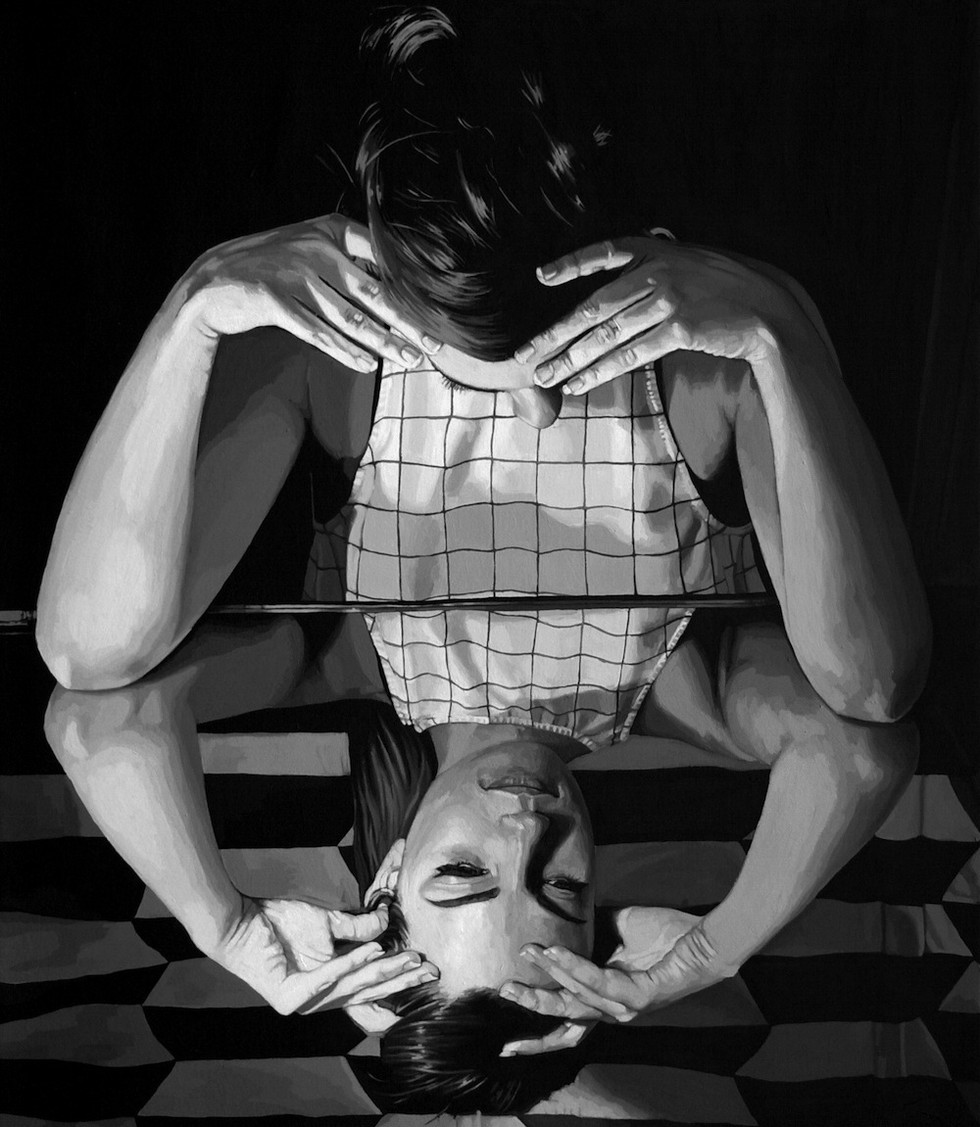 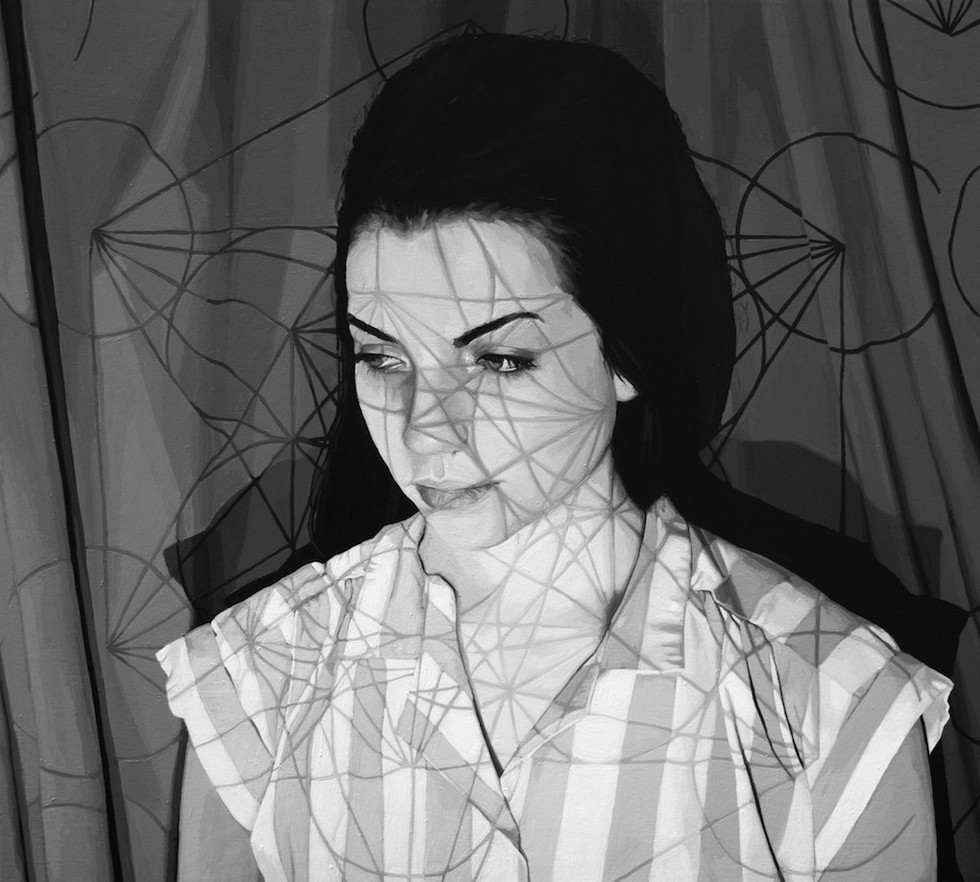 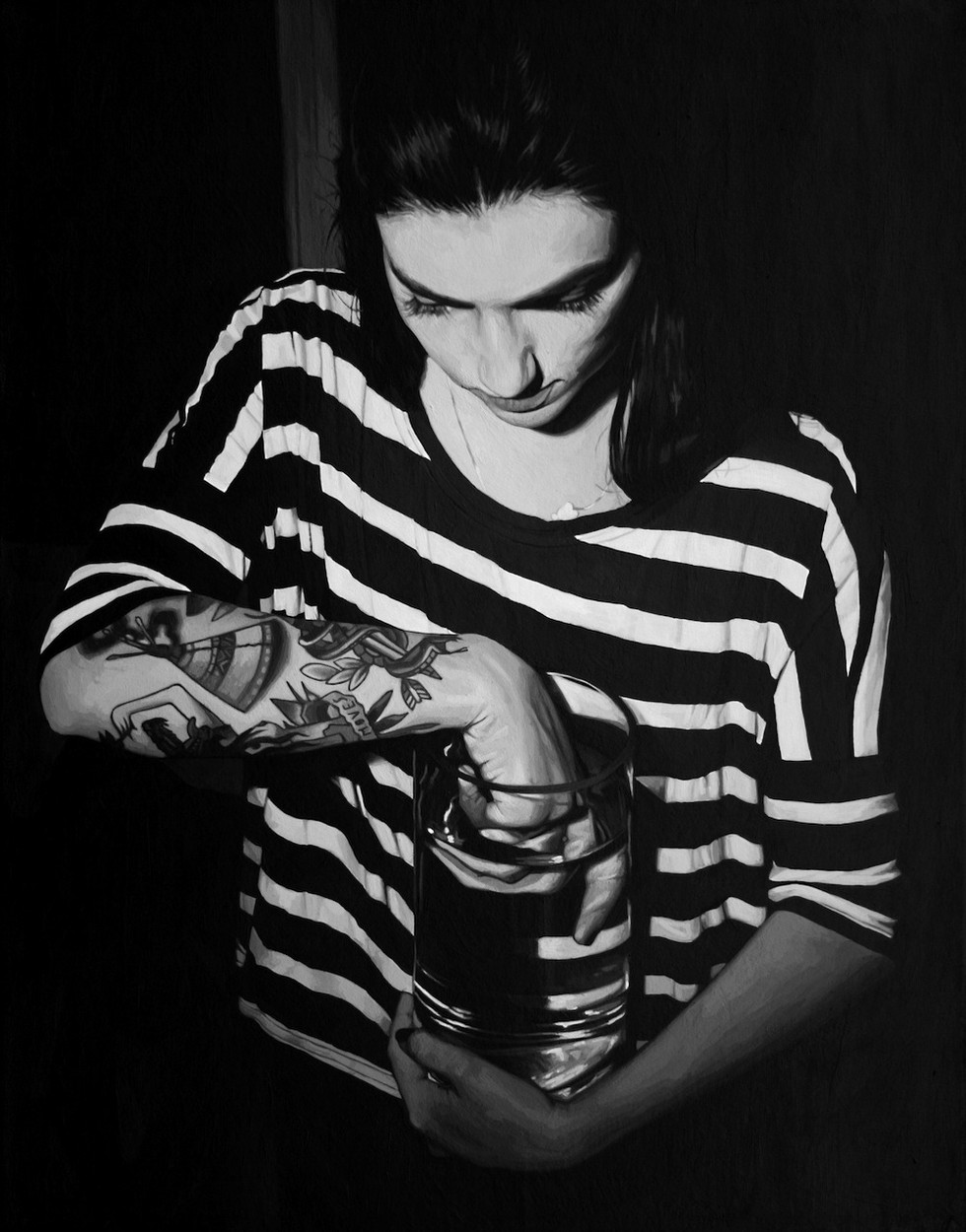 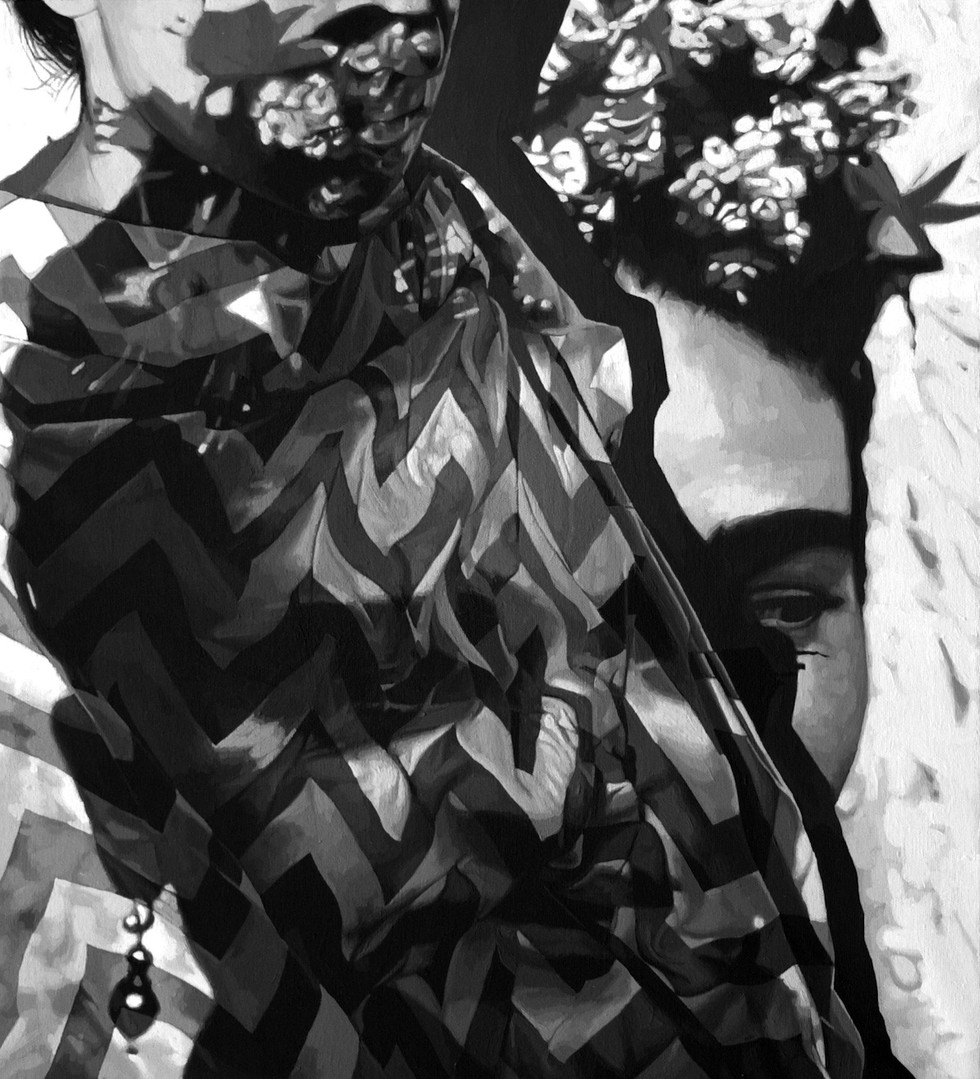 I usually have a vague concept or image in my mind of what I want the final painting to look like before I go into a shoot. But I also give myself a lot of room to experiment in the process. I've never really done a lot of sketching before a painting. I think photography is my way of feeling an idea out without having to commit to it. Once I've got some images worked out and edited, its just painting from there.

How long have you lived in Providence? Are there any aspects of Providence that inspire and inform your work?

I have been living in Providence for close to fourteen years now, I think. I never really felt like I found my place in the gallery scene here. Which is why I ended up traveling a lot for shows in California, New York, Philadelphia. I think what inspires me about Providence, though, are the people that I end up using as models. As I mentioned before, most of them are friends, and also artists and musicians. So my portraits have taken on this private meaning for me as a kind of documentation of my community here and the people around me.

What's the ultimate goal of your work?

My work has been a lot about finding ways to explore abstraction, whether it's through pattern, light, repetition, or composition. I always want to transport the viewer somehow, to give them a sense of something a little otherworldly or dreamlike based in reality. I feel like I have a lot more to explore with these ideas, and I'm curious to see what direction it ends up going in. But as far as future goals, perhaps some color one day soon.