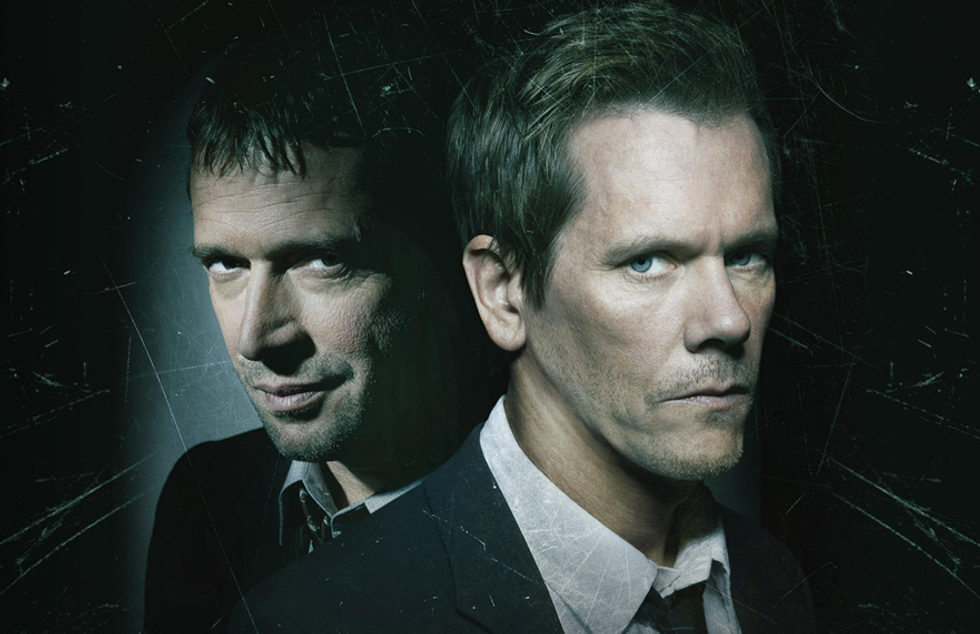 Reasons Why I'll Miss The Following

by Dennis Dermody
PAPERMAG
Last night on Fox was the two-episode finale of The Following -- it probably won't get the lengthy TV recaps that Mad Men received....or the pithy think pieces in newspapers and magazines. But it was a solid final two hours of shocks, surprises, suspense and a dip into the icy waters of a universe ripe with demented psychopaths and the brave souls trying to take them down. This series was a runaway hit when it premiered for the first season. Created by Kevin Williamson it introduced the dark universe of Ryan Hardy (Kevin Bacon) -- the FBI guy who captured wily serial killer Joe Carroll (James Purefoy) and had a pacemaker to show for it. He is lured out of retirement when Carroll escapes from jail only to discover that Joe has created a network of like-minded murderers to help with his plan of spreading his special brand of chaos and death. Purefoy was a blast as the erudite, handsome, former college professor and Edgar Allen Poe enthusiast, and the show was overflowing with every shade of loony murderer -- all played to the hilt by terrific actors, and shot here in New York.

The second season introduced the crazy twins (played with scary/witty brilliance by Sam Underwood) and their equally mental mom (Connie Nielsen). But the ratings slipped during the third season, and it's a damn shame because you really got to see how great Kevin Bacon could be as an actor -- slipping off the wagon into alcoholism while trying to maintain a stable relationship and bring to justice a new series of fearful threats. I remember seeing a young Kevin Bacon at the Perry Street Theater in a staggering production of Alan Bowne's devastating play Forty Deuce years ago, and Bacon was just unforgettable as a junkie hustler. When his star ascended later in movies like Footloose I was not surprised. But watching him through these three seasons as the tormented deeply flawed Hardy was just thrilling.

One of the new main bad guys this season was a man who slipped in and out of a million identities to mask his psychopathic tendencies -- Theo. And actor Michael Ealy was absolutely brilliant in the role -- sexy, dangerous, utterly mesmerizing. Too briefly on the small screen was his sister Penny (the gorgeous and scene-stealing Megalyn Echikunwoke). As Ryan Hardy's cousin Max, Jessica Stowe was always intense and wonderful and Shawn Ashmore was consistently terrific as dogged agent Mike Weston. This season also had one of the show's finest moments -- the death by lethal injection of Joe Carroll which played out with unexpected pathos and horror. You really wanted to see that character get his -- but the actual experience was beyond disturbing.

Now I'm not getting into the specifics of the final moments of the show (no spoilers here) but it saddens me that The Following was cancelled because I can only half imagine what was to be for another season -- especially targeting wealthy, well-connected killers who would be difficult and dangerous to unmask. But at least for three seasons we were able to watch Kevin Bacon turn a heartbreaking portrait of a flawed but righteous soul and revel in many pulse-pounding moments of great TV. So I do say a begrudging "Nevermore" as this show disappears but I'm really going to miss its genuinely creepy charm.
You May Also Like
Care