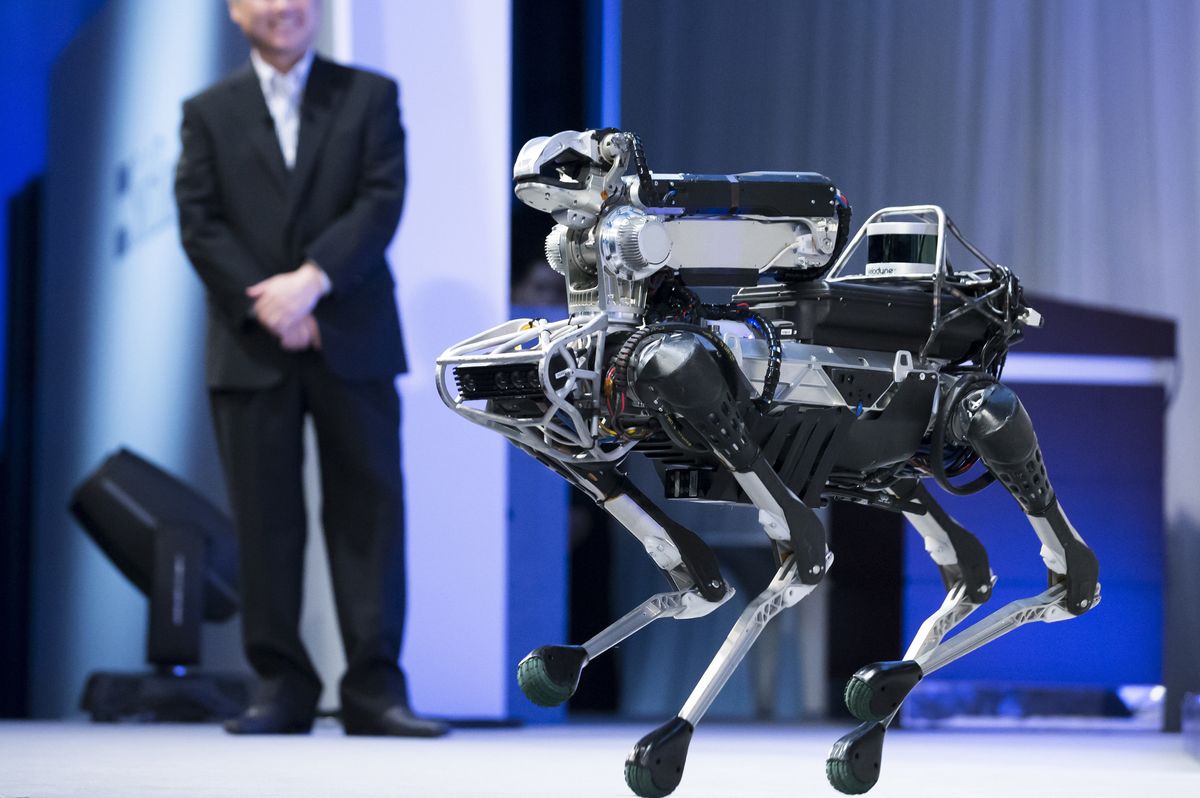 Who Needs a Real Dog, When You Can Get a SpotMini?

Technology has taken over the world. No, we're not talking about some Jetsons-style fantasy where people fall out of flying cars, and everything's practically floating — well, take that back. That might be next, too.

We're talking about VR headsets becoming household objects, virtually everyone having a smart home device, and soon enough, A.I. pets becoming the new norm. Boston Dynamics, once a branch out of the Massachusetts Institute of Technology (MIT), recently released a video of their darling "puppy" SpotMini opening a door with a giant hydraulic arm and clam for another SpotMini. With tech already so intertwined with our daily lives now, is this the start of an official robo-revolution?

SpotMini is one of Boston Dynamic's most advanced creations to date. According to it's/his/her/their (What are SpotMini's pronouns?) bio page:

"SpotMini is a small four-legged robot that comfortably fits in an office or home. It weighs 25 kg (30 kg if you include the arm). SpotMini is all-electric and can go for about 90 minutes on a charge, depending on what it is doing. SpotMini is the quietest robot we have built.

SpotMini inherits all of the mobility of its bigger brother, Spot, while adding the ability to pick up and handle objects using its 5 degree-of-freedom arm and beefed up perception sensors. The sensor suite includes stereo cameras, depth cameras, an IMU, and position/force sensors in the limbs. These sensors help with navigation and mobile manipulation."

Joining an adorable(?) family of other robotic "pets" like Atlas, Handle, Spot, Wildcat, and Bigdog, SpotMini is not only cuter, but also demonstrates the uncanny ability for robotics to mimic genuine life through problem solving, and somewhat fluid physical motions. Maybe somebody should send Sophia at Hanson Robotics a SpotMini, I'm sure she'll appreciate a fellow robot to plan the end of human civilization with.

A.I. continues to be a controversial topic within the tech industry.

Stephen Hawking, theoretical physicist, cosmologist, author, and Director of Research at the Centre for Theoretical Cosmology at the University of Cambridge, famously said during the Web Summit technology conference in Lisbon Portugal, quote: "Computers can, in theory, emulate human intelligence, and exceed it."

Afterwards, also saying: "Success in creating effective A.I., could be the biggest event in the history of our civilization. Or the worst. We just don't know. So we cannot know if we will be infinitely helped by A.I., or ignored by it and side-lined, or conceivably destroyed by it […] Unless we learn how to prepare for, and avoid, the potential risks, A.I. could be the worst event in the history of our civilization. It brings dangers, like powerful autonomous weapons, or new ways for the few to oppress the many. It could bring great disruption to our economy."

I'm sure by now lots of tech bros in Silicon Valley or self-proclaimed tech bros (How's the lighting in your Mom's basement?) are rolling their eyes by now. But to be clear, I'm not against A.I. — personally I'd love a SpotMini. But if one of the world's most revered figures in science is wary of the future of artificial intelligence's role with humanity, shouldn't we all take note too?

In the next 10 years, the world will completely change. The People's Republic of China already has a social credit system ready to roll out, Google basically has all of our digital blueprints in storage, and Facebook pumps out ad recommendations five minutes after you're done browsing for a certain item category. Even if you live under a rock, you can't escape tech. Why? Because Google Earth will track you down through satellite cameras.

So today, enjoy your GIFs of SpotMini, and be polite to Alexa and Siri.

They're a lot more real than you think.