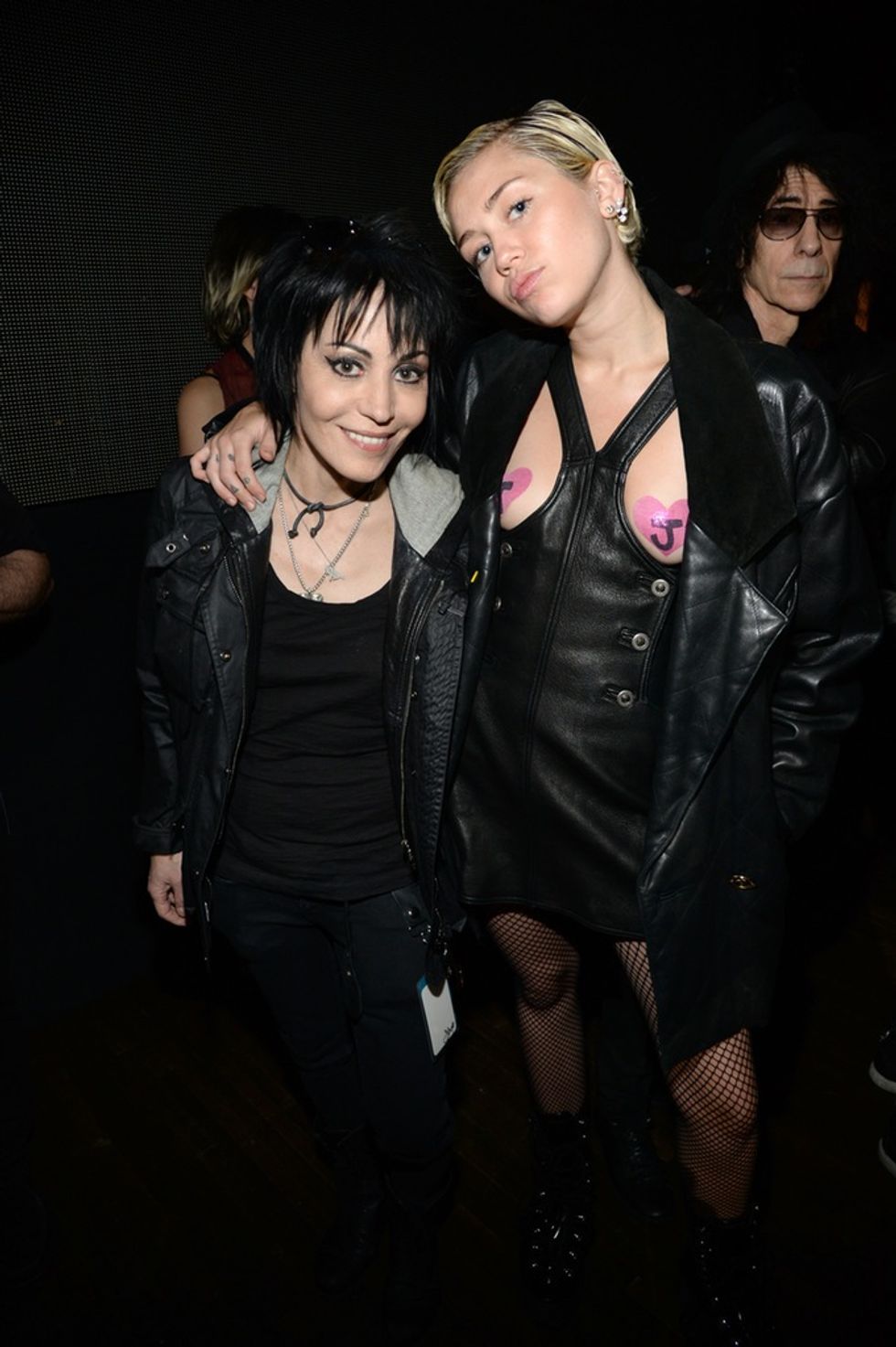 by Elizabeth Thompson
PAPERMAG
Joan Jett was inducted into the Rock and Roll Hall of Fame this weekend with Lou Reed and Green Day. Back in 2010, Jett told us inspiring other girls to play rock music when she formed her short-lived but seminal band the Runaways was vital to her. The rest of the world, it turned out, wasn't ready for it. "I remember thinking 'I can't be the only girl in Hollywood, in Los Angeles, California, who wants to play rock 'n' roll. There have to be other girls out there like me.' It was not only about finding my band members, but once I found them, inspiring other girls. It seemed like a no-brainer. Like everyone would be excited to see teenage girls playing rock 'n' roll. I guess I was just super-naÃ¯ve -- I never anticipated the sort of shit that girls would take."

And, like any female pop performer, Miley Cyrus knows that shit well. Wearing "JJ" pasties, the singer gave Jett's induction speech, saying, "She] made the world evolve, her life and her success is proof that we can self-evolve." Cyrus also performed covers of the Runaways' "Cherry Bomb" and Jett's rendition of "Crimson and Clover" with Dave Grohl and Jett.

Watch a snippet of the Jett/Cyrus/Grohl/ performances and read Miley's speech below, which features she and Jett smoking pot in a hotel room bathroom paid for by Oprah.

Thank you guys so much. I'm going to start off this induction with the first time I wanted to have sex with Joan Jett. We were doing Oprah together, and I go up to Joan's hotel room. Joan opens the door, and I come in, and Kenny Laguna is laying in bed. I don't know what the fuck is going on. There's towels shoved underneath all the door cracks, shower caps around all the smoke detectors. Joan is running around spraying orange-smelling cleaner to mask the smell of "the pot" (that's what you guys call it), and we go into her bathroom.

The show was where new artists got to perform with their idols, and I wanted to perform with Joan, of course. And we were in her bathroom, and we were smoking and just talking, and this was one of the moments in my life where I wanted to be as present and absorb everything that she said to me. I listened to her talk about her days with the Runaways. She talked about music. She talked about why she loves animals and she doesn't want to eat them. I was getting to have this moment with someone that, to me, is Superwoman; what Superwoman really should be.

At first, having this honor to induct Joan Jett into the legendary Rock and Roll Hall of Fame was overwhelming. There was so much that I could say and she just had a life in music that is rare. She's had a career that's decades long. She's been the first to do many things and not just as a woman, but just as a badass babe on the planet.

But this one story is my favorite: So on one trip, Joan went to entertain the troops in Turkey and the Middle East, and Joan was traveling with the Secretary of Air Force. And Joan had requested a trip to Jerusalem, where she was playing, on the USS Bataan in the harbor of Haifa. Not acquainted with the culture, and all covered up in black because it was a cold day and looking kind of androgynous, Joan accepted a yarmulke from one of the guards. And she went over to the men's side of the Wailing Wall to make a prayer.

And just as Joan noticed a bunch of other women at another part of the wall, Joan's Israeli friend assigned to the trip appeared freaking out and screaming "international incident." The American Marines watching us were getting ready to protect Joan from the Orthodox who tried to exact retribution if they knew about the transgression. So everyone agreed to never speak about this (sorry), and swore that Joan was the only woman to ever stick a prayer in the men's side of the Wailing Wall.

She was also the first major female artist to start her own record label, and that's only because all the other labels said that there wasn't a market for that kind of music. And Kenny Laguna, I want to say something to you. I want to say that you're a fucking genius and this is why: Because when 23 record labels were saying that you started Blackheart Records together with Joan, by the way using his daughter's college savings, selling records out of the back of your Cadillac. And it takes someone like you that believes in the music but, more than that, believes in us as people and as human beings. You two are an unconventional and unconditional kind of love. What you guys have is what all of us should look for in the people that we spend our lives and our valuable time here on the Earth with. People in this room are probably married to people they love less than you guys love each other. I'm honored to be part of your life.

I'm also honored to induct the Blackhearts tonight. Why don't we bring everyone up right now.

But I do want to say one final story about when I knew that I loved Joan so fucking much. And this shit kind of fucks me up because it's the day that she was dedicating her time to an upcoming project for my foundation, supporting the LGBT homeless youth. She was running around our backyard. She was with my dogs, playing with my pig, and I played the Tibetan bowls for her at sunset. Kenny and Joan, they sang along with these bowls. And this relationship seems different than the one five or six years ago smoking pot in Oprah's bathroom. Oprah was paying for it. It wasn't her bathroom, but she paid for it.

I now look at her less as a deity, but now I have this connection, and I have this connection with her that she can be a guide for me. Growing up, my dad always kept me around music, and I spent a lot of time with all different artists. But I know there isn't one other person on this planet that's been an inspiration to me like you have. Joan's music, her activism, who she is. In all of our lives, all of us will experience people who try to tell us who to be and what to be. Fuck those people! Instead of changing for other people, if you don't like how the world is, change it yourself. She made the world evolve, her life and her success is proof that we can self-evolve. I want to thank you for fighting for our freedom, Joan, and I love you so much.