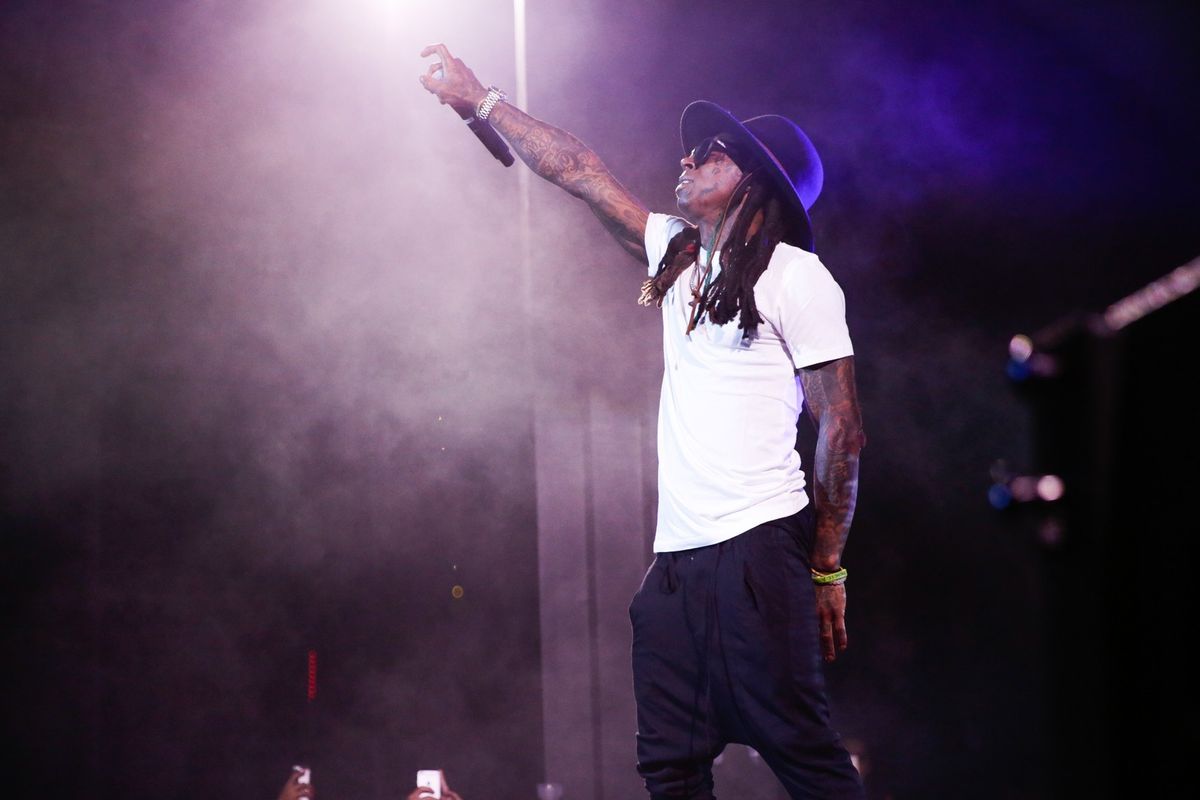 Next week, Lil Wayne will release his prison memoir, Gone Til November, which details his experiences serving an eight-month sentence for possession of an unregistered firearm at Rikers Island. He previously revealed that that the memoir will feature the tale of a story about officiating a same-sex wedding behind bars, and today he shared a lengthy excerpt from his prison journal with vulture, which details Weezy's day-to-day reality at Rikers, the friendships he formed there, the snacks he ate, and the day he found out that his girlfriend had sex with Drake. Damn. Check out our choice snippets below, and read the unabridged excerpt here.

On his first day at Rikers:

I've never been one who doesn't take full responsibility for his actions, but damn, I really don't deserve this. If I hadn't traded my blue Marc Jacobs jeans, white polo, and gray Vans for green onesies, I wouldn't have believed this shit myself.

I had to talk to the prison psychiatrist when I got here. I told her that I shouldn't be talking to her because I'm not crazy … but I ended up really enjoying her conversation. Is that crazy? We talked about traveling the world, where we've been and where we would like to go, BUT both of us were in jail … crazy!

My next conversation didn't go so well. As I was being led to the captain's office, I was still just trying to figure out what I was about to go through. I got lost in the thought of how each step that I made was one step farther from everything that I love. And to what? A world of dysfunction, disrespect, and distrust. Come to think of it, it is sort of like the music biz only without the female groupies.

As soon as I sat down in the captain's office, his exact first words to me were, "Don't fuck with my staff!" Damn! Definitely won't be getting any celebrity treatment from the captain. The whole conversation was him telling me, "Don't come in here trying to be what you are. You're not gonna 'Lil Wayne' up this mothafucka!"

All I was thinking was, Since there's nothing else to explain here, I'm done with this dude, so just take me to my cell and I'll stay out of your way. After the captain's great words of discouragement, I was handed a towel, two sheets, a toothbrush, toothpaste, and a green cup. Oh yeah, and a cell, cell 29.

As soon as I heard the cell door lock behind me, I just sat on the back wall and the tears began to flow as I took my first glimpse at my new digs: three buckets, one bed, one toilet that was surprisingly kind of clean (emphasis on kind of), a rusty-ass sink with a mirror the size of a small notepad, a desk, and a window. A clothesline was left hanging in the cell. I decided to leave it because I figured it would come in handy.

I got in just in time for chow, which is the overall term used for what they call breakfast, lunch, and dinner. I only ate the veggies because I wasn't too sure what the other stuff was.

I wasn't in the mood to do much socializing, so I kept the first-day meet and greet short. I guess not everybody on staff got the captain's memo because two C.O.'s were suspended for trying to come up and see me ... females of course. Maybe there will be some female groupies in the bitch after all.
Fuck ... one down

And then there's Ms. Burke. Owwww! She's so sexy! She has a head full of gray hair, but she's not old. I'm not sure what caused it, but she said that her hair has been gray since she was 13. My first impression was that it's just her swag and she dyed it gray on purpose. That's how cool it looks on her. I mean she's fine as hell. I'd definitely hit it!

On performing in prison and being blessed with snacks:

I rapped for the first time on the yard for Charlie and Jamaica. It's crazy that I've performed in front of millions of people since I was 8 years old, but for some reason I was nervous as hell. Rapping has always been second nature to me, but my creativity has definitely been put to a test since being in this bitch. I absolutely refuse to rap about being in jail. It's not who I am AND it's not who I'm going to be! I hope they liked it. I think they did.

Chris gave me two bags of Doritos. I gave him some bubble gum. It wasn't a trade, just two generous guys. But yeah, someone blessed me with some gum, a Now and Later, and a Jawbreaker today. Yeah!

On realizing his girlfriend slept with Drake (and friendship!):

I woke up still feeling fucked up about the fucked-up day that I had. Hell is what it was! I'm used to arguing with my girl on a daily basis, but finding out that she fucked Drake was the absolute worst thing I could've found out.

As a man, honestly, that shit hurt, and not because it was Drake. It could've been any man and it would've hurt the same. She said it happened way before we got together, but she just never told me. When Drizzy came to see me, he was like, "Yeah it's true ... don't fuck with her like that 'cause I did fuck her." Damn!

This is the type of shit that a man never wants to find out while he's locked up. Or maybe so, 'cause only God knows what I would've done if I wasn't locked up right now. As soon as I found out, I told them to just lock me in, and I've basically just been by myself in my cell for the last couple of days.

Not sure how long I would've stayed in there if it weren't for Charlie. His fat ass wasn't going to let me just sit up in this bitch and not eat. He was like, "I don't give a fuck what you're mad about, we cooking no matter what, nigga. Come on man, let's eat!"

On recording a verse for Drake's 'Light Up' over the phone:

Who knew that my spirit was about to be lifted through the roof! Tez was like, "We want you to be on Drake's remix." I was like, "How?" And he was like, "We're going to do it over the phone." I'm like, "Shit ... I don't have anything else better to do up in this bitch, so let's go!" After I finished running it, I was kinda nervous on how it was going to be received. This was the first time that I haven't been in the studio to hear the playback before a song goes out.

I can't front, I'm really bugging out knowing that I can record a song AND it would be on the radio and everything. My main thought is, Damn ... if I can do this, I'm about to go to the studio every night. I told Tez to have the mic on standby from here on out.

Nothing else that happened today mattered. Nothing can touch how happy I am. My creativity is at an all-time high right now! I'm actually looking forward to tomorrow.
Writing, writing, and more writing! Another one!

On his visits in prison and his girlfriend's thwarted attempt at flashing:

Just got back from my visit. I have the best friends, fans, and family in the world. I've been in this bitch for a good minute now and have never missed a visit yet. You get two visits a week and I haven't missed one yet! That shit is incredible 'cause I've never seen Jamaica get a visit. The only visit I saw him get was the mothafuckas who deported his ass came and got him. Coach has never got a visit. Dominicano has never got a visit. Charlie has never got a visit. I got every visit I was supposed to get. I've been able to look forward to seeing someone every chance I was able to see someone ... THANK GOD!

I even feel blessed when I argued with my girl during visits because it would become the topic of my day. And by the time we spoke later that day, the argument was so amplified in my head that I couldn't wait to jump on the phone with her. Being that she was dealing with real-life shit and not up in the hellhole, she would normally have forgotten about the whole thing and be on some "I love you, Baby" vibe ... I'm like, BITCH!!! That shit might sound crazy, but it's awesome to have something to look forward to that takes your mind out of being in jail!

I told her I didn't want her to wear any panties so I can look at her pussy and shit one time. But since I never wear the same T-shirt, boxers, or socks more than one time EVER, my nigga E.I. always brings me new T-shirts, boxers, and socks every visit. And they have these extensive-ass searches before you come in here, so they made her put on a pair of boxers because they knew she didn't have on panties. Damn!

Gone 'Til November: A Journal of Rikers Island will be released by Penguin on October 11th.