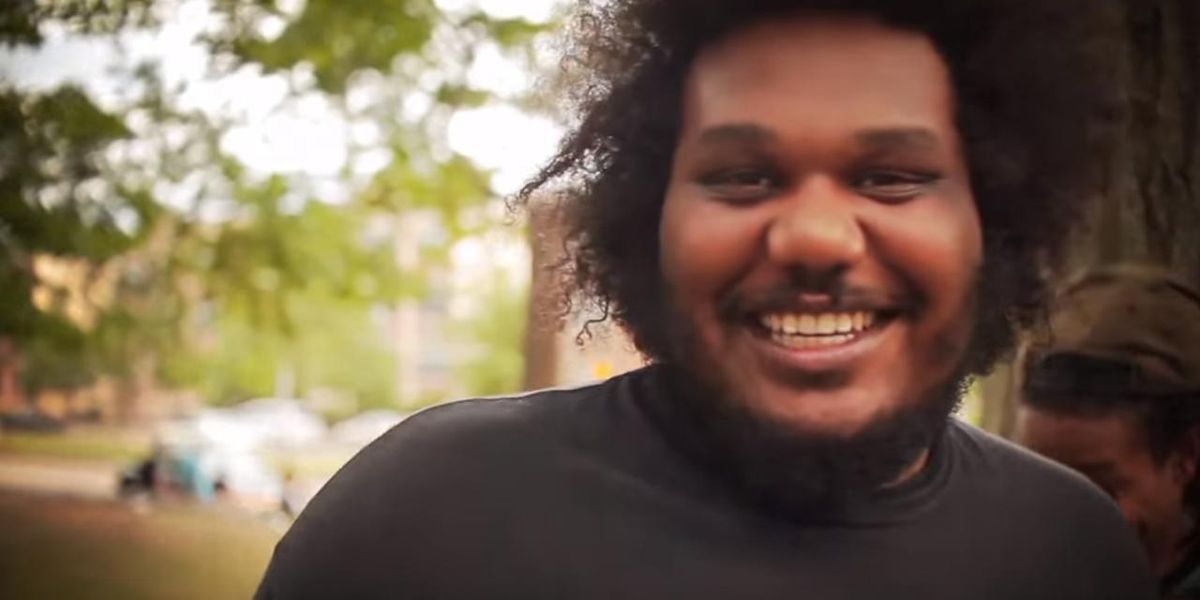 Michael Christmas Is Here For The Trolls, The Bodegas And The Kids Who Need Someone To Look Up To

These past few years have been a whirlwind for Boston-raised rapper Michael Christmas. His 2013 video "Michael Cera" was the awk-anthem that put him on the radar at 19, but he's since released two successful full-length projects -- including the humorously self-aware mixtape Is This Art? and his new 18-track debut album What A Weird Day.

An undeniably talented artist, Christmas glows as one of indie-rap's most lovable personas thanks to his genuine excitement and aptitude as a storyteller. After all, who else can turn a diss track into a tasteful, witty, self-deprecating commentary on fakes?

As such, we caught up with Michael Christmas to talk relatability, the secret to success, and the weird life of an up-and-coming rapper -- not to mention everything from burritos to bodegas.

So What a Weird Day is your newest album. Is there a concept behind the name, or is it just you talking about everyday experiences?

The way I explain it to everybody is that it's like a sitcom. It starts with an adventure you didn't know you were going to be on, and then you go through a bunch of shit that challenges you. But at the end of the day, you come back home to your people and you tell them what happened.

People have called you the "everyman" rapper. Do you agree with that?

I'm trying to be the most relatable rapper I can be. I don't want that just because of the stigma, I just think that we need that right now. I think that with so many people getting so big so fast, everybody needs somebody to relate to.

It's really cool 'cause I still get on the train. I'm at a bodega right now. My people are like, you're doing all these different things, yet you're still on the train and coming to all the spots that we kick it at.

That really resonates with the music video you just dropped, "Look Up/Save the Day," filmed in your hometown Roxbury, Boston.

I shot a lot of that on the street that I grew up on.

I guess what you're saying is that you want to fill the gap between being stuck where you are and "making it." We don't really see that and we need someone who fills those spaces.

Exactly. You don't know what happens for a lot of rappers between A and B, and I want to bring my fans along for the whole journey and be part of my life. That's what makes lifelong fans.

You're really close to your dad. Did he influence the kind of music you listen to at all?

Me and my dad are actually best friends. He influenced, more than anything else, my personality. A lot of the stuff that comes through in my music that people enjoy most is stuff that I got from my father over the years. My ability to take bad situations and turn them into something funny, that's something we've always been doing. He's had a way rougher life than I did, but he's always smiling and he's always laughing.

Is [What A Weird Day's] "Everything Burrito" a reference to [cult cartoon series] Adventure Time?

That's exactly what it is. I remember the first time I saw Jake wrap the Everything Burrito. I thought that was the coolest shit ever.

That's incredible. What TV shows do you watch these days?

I really like that show We Bare Bears on Cartoon Network. Me and my sister watch that. They have that one episode with the rap song and it was so fire. Last night I was tweeting about it -- like if Cartoon Network has a label I'm tryna talk to them.

What's one of the craziest things a fan has done so far?

I had a fan once who caught my towel that I had been using to wipe up my sweat the whole night. At the end of the show, he came up to me and was like, "Dude I caught your towel!" and then rubbed his face with it. I had a girl crawl on stage once and kiss me. That shit wasn't cool either. A lot of weird shit happens.

This life is weird. A year ago a lot of this shit wasn't happening, two years ago none of this happened. So the change is really drastic for me, I'm just trying to get used to it now.

Looking towards the future, are you trying to make a platform for other rappers?

That's exactly what I'm trying to do. If I push forward with the people from here and everybody starts supporting each other the same way, I think Boston will be on the same wave as New York, Chicago, Atlanta, LA in like a year or two.

What do you think about award shows?

They're stupid, but I want them awards. [ Laughs] I want a Latin Grammy real bad. I'm trying to pull up to the Grammy's and play the "Penis Game". I'm funny, I'm telling you. Watch, I'm gonna be in movies. I'm gonna write movies...Next year I want to start acting, and I eventually want to do stand-up. I want to do everything. The plan is to get as famous as possible through music, turn that into everything else I want to do, then troll America into giving me their money while making every kid feel like somebody's there for them. I don't want to troll the kids; I just want to troll the people that don't understand me.

So you're just trying to be a creative right now.

Rap is fun, but I know I can do it....I'm gonna keep doing it because performing and music are my favorite things to do, but I want to show people that I can get down however I feel like.

I tell everybody that the main thing to being successful is knowing what you want. It's like the compass from the Pirates of the Caribbean; if you don't know what you want that shits gonna go awry.

I follow some of my biggest fans on Twitter to build that relationship. Lifelong fans want to know that you're interested in them, too. There are a couple fans of mine that have started dating because of my music. That shit is so interesting to me because I can't get a girl to save my life [Laughs].