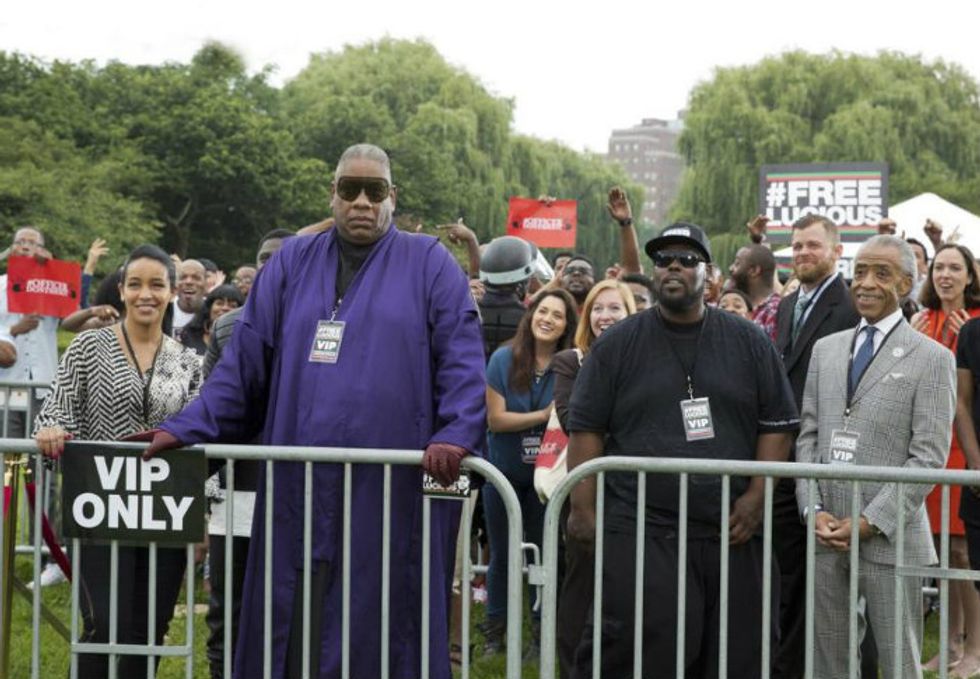 Ranking All the Insane Cameos On Last Night's Empire Premiere

by Eric Thurm
PAPERMAG
Last night's Empire premiere had pretty much everything people love about the show (and did the ratings to prove it, coming in just shy of breaking records). There was juicy Lyon family drama, with Hakeem and Cookie teaming up against Jamal and the imprisoned Lucious, some extra-soapy scenes set in a prison, and rap references that somehow felt both extremely dated and ridiculously fun (i.e. the gratuitous deployment of the Shmoney Dance).
But one of the best things about Empire is the way it avoids shoehorning in famous people for no reason -- or, at least, when it does shoehorn in famous people for no reason, it does in a way that is just delightful and weird. Let's run down the best and worst celebrity appearances from last night's episode (spoilers to follow):
6. Swizz Beats
Yeah, yeah, okay, Swizz Beats shows up playing himself to perform at the Empire benefit concert to free Lucious. Cool, I guess, but also the sort of thing you'd expect from the show. At least he gets to hop on one of the better songs of season two so far.
(photo via Yahoo!)
5. Andre Leon Talley
Who else could successfully throw shade at Cookie for wearing last year's clothing? (You can also watch Talley discuss the cameo -- and Lee Daniels' apparently very forceful phone call, with Andy Cohen here.)
4. Chris Rock
Playing the Lyons' old street boss Frank Gathers, Chris Rock gets to actually do some acting -- and he's a lot more threatening than you'd expect if you only knew him from his comedy. While his character meets an apparently brutal end at the hands of prisoners Lucious has paid off (though who knows, since we don't actually see the death), we can remember him for this one episode, and also keep in mind that he was apparently supposed to be a cannibal?
(photo via FOX/Chuck Hodges)
3. Al Sharpton
Al Sharpton basically shows up here so Cookie can shut him down, which is a pretty incredible use of Al Sharpton. Also, he's exactly the right combination of "vaguely political" and "bizarre, dated entertainment figure" to fit in the Empire universe. We wouldn't say no if Al became a recurring character solely to get berated by Cookie... just saying.
(photo via FOX/Chuck Hodges)
2. Don Lemon
We all know that Don Lemon is the absolute worst, but that doesn't mean it wasn't fun to see him show up at the benefit concert trying to get the scoop on why Cookie was wearing a gorilla suit at the show. He can join Al Sharpton in the Smackdown Squad, especially now that Jamal is showing enough backbone to stand up to Cookie.
(photo via FOX)
1. Marisa Tomei
The queen Marisa Tomei shows up to play Mimi Whiteman (wow), an angel investor crucial to Hakeem and Cookie's efforts to take over the company. "Who is that lesbian bitch?" Lucious says, announcing the arrival of a major player in the Empire boardrooms. Okay, this one isn't really a cameo, since Tomei is going to be sticking around... but she's so great, and Mimi can clearly play -- even after Cookie gets Anika to sleep with her, she double-crosses Cookie and Hakeem and helps Lucious and Jamal retain control of the company. As Jackee Harry put it...