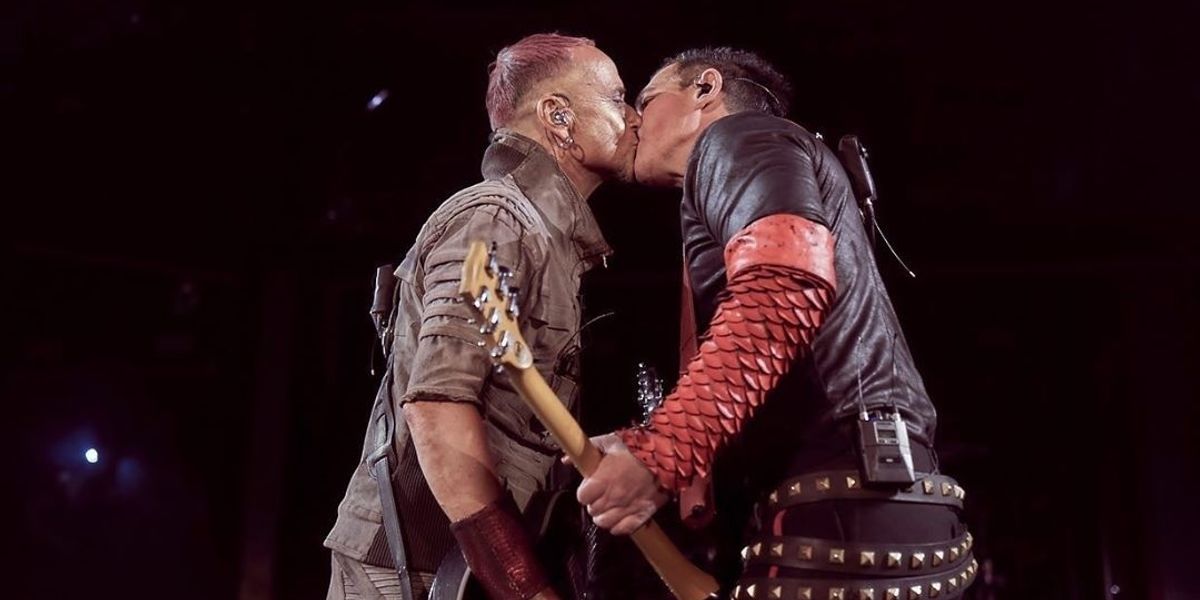 With this as my only context, it was very cool and not entirely surprising to see this photo of Rammstein from their recent concert in Moscow. Guitarists Paul Landers and Richard Kruspe ended the show by making out on-stage, and saying "Russia, we love you," flying in the face of the Russian government's crackdown on LGBTQ people.

Their steamy performance tactic is specifically being linked to a policy called the "gay propaganda" law, that bars "the promotion of non-traditional sexual relationships" to minors, which based on its usage so far, includes films like Elton John biopic Rocketman and pretty much all LGBTQ rights activism. It can even get foreigners like Rammstein "arrested and detained for up to 15 days, then deported, or fined up to 5,000 rubles and deported."

The law has also justified the lack of judicial action taken against hate crimes targeting LGBTQ people. As recently as last week, LGBTQ activist Yelena Grigoryeva was stabbed and killed after her information was shared on an anti-LGBTQ vigilante Facebook group, which Russian authorities have reportedly failed to investigate.

According to The AV Club, the Rammstein kiss wasn't a totally new addition to their set, and thus not entirely about protesting Russian policies. Apparently, the band has been ending their shows with a make out session throughout their current European tour, which, given the band is all straight, as far as we know, is perhaps a questionable shock tactic.

Related | Russian Official Threatens LGBTQ Leader: "Go Back to Where You Belong"

However, huge, scary looking dudes sucking face front of thousands of people in country full of rampant, institutionalized homophobia — and getting people talking about the oppression of queer Russians — you have to love it. Rammstein's camp and leather has always had a queer sensibility, and this might just bring to icon status.