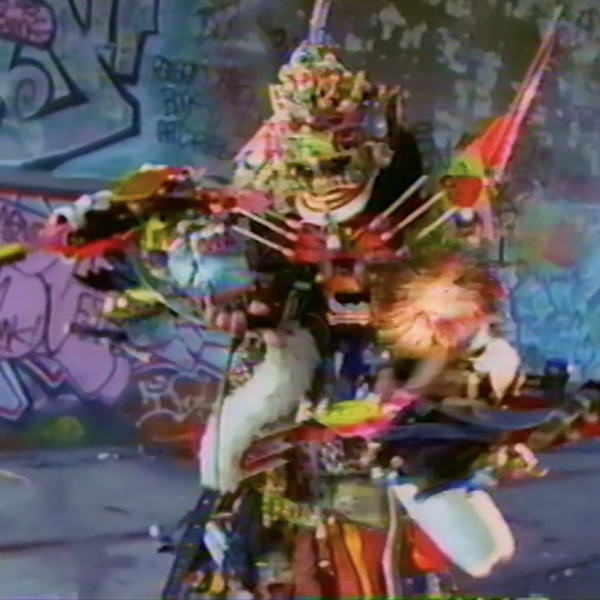 The Mythology of Rammellzee

Looking like a monster that had walked off the set of Power Rangers, stalking the subway tunnels of New York City with a keytar and a can of spray paint, Rammellzee is the stuff of legends. Some say he is an ancient being dating back to the 14th century, birthed out of the lost languages of monks, while others insist he is alien sent from the future to preach the gospel of an underwater utopia. But what everyone can agree on is that there is only one Rammellzee.

Criminally slept on as an artist, it's not that people weren't aware of Rammellzee's work, they just had a hard time pinning it down. A graffiti writer, a rapper, an artist, a sculptor, a musician, and a performance, Rammellzee was a prolific figure of New York's street art scene in the late '70s and early '80s working with Jean-Michel Basquiat and going on to influence generations of hip-hop artists to come. Guided by his own elaborate mythology, which he dubbed "Gothic Futurism," Rammellzee used his work to flesh out an incredibly detailed fantasy work and then let loose his sci-fi punk creations on the world.

Even though he is no longer with us, this Saturday marks what would have been Rammellzee's 68th birthday. So to honor and celebrate the life and legacy of a New York Icon, Red Bull Arts has enlisted documentarian Oscar Boyson to take us on a cosmic journey through the subway tunnels of NYC to get to the heart of what makes Rammellzee such a mythic figure.

"Rammellzee is an incredibly difficult guy to make a movie about, because you can tell how aware he was of the way societies and markets would attempt to appropriate his work in the same way he witnessed them appropriate hip-hop, aerosol art and subway writing," says Boyson on the short film. "He left a tremendous amount of work here on Earth, so while it's an honor to try and synthesize it into something coherent, the real hope is that the film inspires people to approach Rammellzee on their own terms, bring something of themselves to the equation, and do their own research. Rammellzee is an extraordinarily generous artist if and only if you are up for the challenge."

Watch the full documentary Rammellzee: It's Not Who But What below: