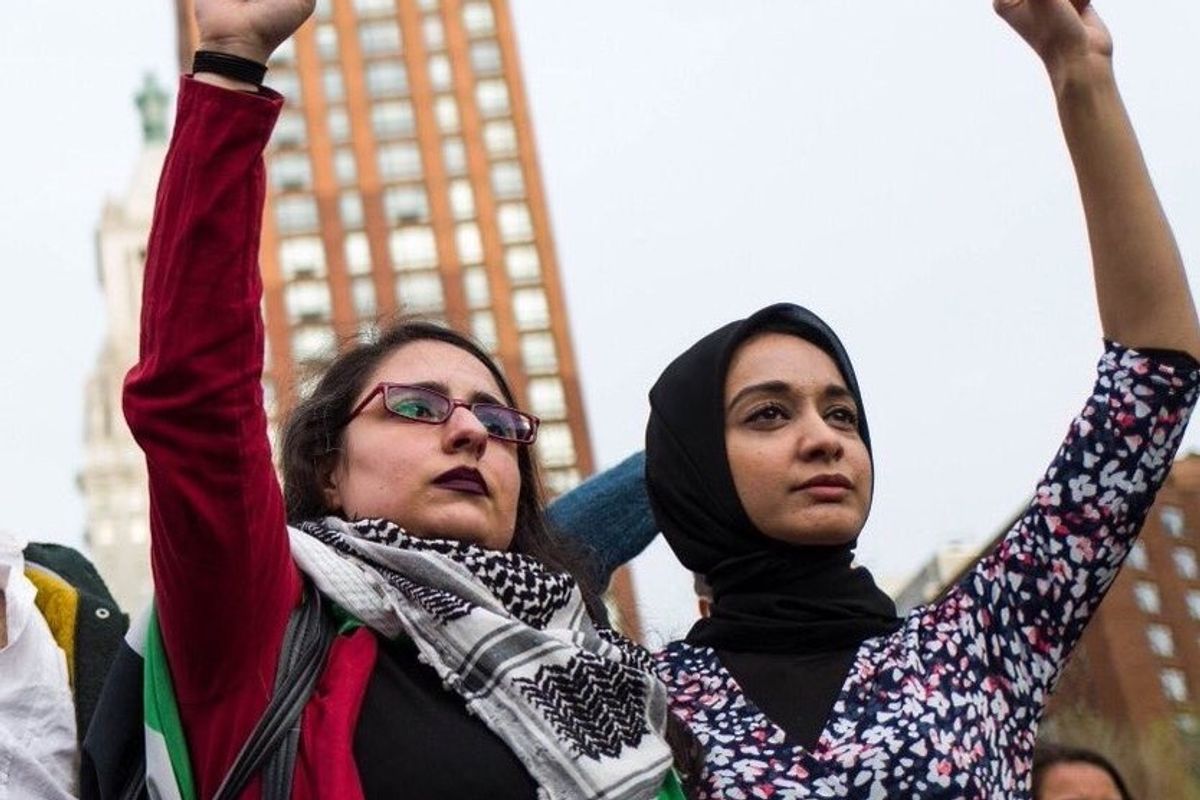 Activist Rama Issa came across our radar when she delivered an impassioned, eloquent speech at the 'Keep Families Together' March alongside Amy Schumer, Padma Lakshmi, and Kerry Washington earlier this month. She is the executive director of the Arab American Association, and has previously worked with refugee youth in Beirut and with the Mayor's Fund to Advance NYC.

As part of a project that interrogated what American pride means in the Trump era, she told us what the 4th of July means to her. Recently, she also sat down with us to talk about how she got involved with activism, how ICE infringes on the civil liberties of communities of color, and how racism exists even in liberal circles. Read the full conversation below:

How did you get started as an activist?

I grew up in Brazil. Ever since I was a kid, I was exposed to income disparity and realized I came from privilege and I didn't understand why in many ways. When we moved to the States, I was 15 years old. We moved post-9/11, in 2002. We knew why we were here, why we came, and why we were leaving Brazil behind and before that Syria. For me, post-9/11, I felt extremely under attack. I went to college at the University of Florida at the height of the Iraq war, so a lot of my activism was anti-war. I did a lot of immigration justice and anti-war work. I worked with workers rights and that kind of got me started.

Then I went to the Middle East for a year, where I worked with refugee children in Beirut and refugee camps there. I came back to the States and moved to New York, and it was a seamless transition for me to go into the nonprofit world and do the work on the ground and work with youth. It's not just activism, it really is a career of service that I have chosen at a very early age. I knew I was going to do everything in my power to uplift the voices of the most marginalized people in my community.

I didn't realize that ICE was created post-9/11 until recently. I'm curious if you think the immigration issues that are happening right now are tied to the xenophobia and Islamophobia that was rampant in the U.S. then and that continues now?

[ICE was created] alongside policies like the Patriot Act as a way to instate fear in the minds of everyday Americans that we needed a law enforcement that specifically targeted folks of color. It really is a way of dehumanizing people of color — brown and black folk. Using ICE as a way to terrorize these communities in order to deter them from coming to this country is something that is very new to this administration, but the fact that ICE has existed for 15 years, it's something that is part of the way this nation has implemented policies that are very white-centric.

During the Obama administration, white liberals would say "Oh, we're post-race!" But now they're seeing that this country has always had racist undertones and some people just thought they could forget about it for a few years.

Yeah, there are racist undertones even in liberal circles. You can even think of Bill Maher who loves to talk about Muslims and Islam being the bedrock of all bad ideas. He says that over and over again and just because he's a liberal doesn't mean he's not an Islamophobe. Like you said, the undertones of white supremacy have always been there, and the fact that we have always used national security as an excuse to crack down on vulnerable folks and people of color, and mask it with national security, dates back to the inception of this nation. We don't even have to go that far back, we can talk about the Chinese Exclusion Act, we can talk about Japanese internment camps. It's history repeating itself, none of this is actually new. We are living in an era where social media and the interconnectedness across the globe is so large that people are waking up to this.

It's easy to be complacent and not pay attention until there is a huge crisis.

Absolutely, I think that it's a post 9/11 world too, where you can say easily, "Well this is for national security. We're protecting Americans, therefore we need to curb civil rights, the rights of immigrants or those who are seeking asylum, we need to create this law enforcement apparatus thats sole job is to round up people and criminalize them." The systems have been there and I think that what Trump has shown us, if anything, is that these systems have already existed. Now he's just taking more advantage of it and taking it to the next level, but he didn't create those systems. They have been around for many decades.

What I heard a lot post 9/11, from my white peers, "Oh why is this a concern? If you're not doing anything wrong, then you have nothing to worry about." But those are the people who have the privilege of not being persecuted for doing nothing.

Yeah, it's this idea where you're like, "So for national security, you're willing to give up your civil rights?" How does this really work?

Absolutely, if you come from privilege, this is easy for you, but if you are constantly under attack, you take a step back and you're like "But why? why am i constantly the one being authorized?"

Related | 13 Cultural Leaders on What July 4th Means to Them

I saw someone tweet that the government is specifically going after children as a way to cause inter-generational trauma. It's a way of harming not only current migrants but also the next generation.

What this administration has been doing is creating trauma that is irreversible — and why? At the end of the day, it's because no one cares about brown children, because if they did care, they would know that separating them from their families creates a sort of trauma that requires years and years of rehabilitation and counseling to be able to come back from. To be pulled away from your family and dropped in a detention center and treated like a caged animal — as a kid you wonder, "why is this happening to me? Why don't I have my family with me?"

If you talk to doctors or folks that study brain development, they will tell you that these are crucial years for a child's brain development and if you are pulling them away from their families, you are setting them up for failure and creating a generation that is going to experience large amounts of trauma and it's going to take them a really long time to come back from that. It's not something that we do to kids and then all the sudden they forget about it, it's not something that a child is going to forget ever. So for a country that talks about child-welfare or protecting our children, we clearly aren't interested in protecting all children.

Also, when marginalized people have justified rage towards the United States, they are suddenly seen as aggressive and violent. But we never see what caused this rage. Suddenly there's this idea of angry people of color.

Always. The context of why they are angry is completely stripped out. Even when the media constantly talks about radicalism and all of that — why are people radicalized? I don't understand the missing piece here. When you invade someone's country and kill someone's family and disrupt their government and their society, what do you expect people to feel?This is the colonizer narrative, like, "Why are you so angry?" "Well, I don't know… you just came into my country and took all my resources and killed half of my people. How am I supposed to feel?"

This is what state violence looks like. When you pull children away from their families and then you expect them to be thankful to the nation that did that, is insane. [People of color] are not angry because they are Brown or Black, we are angry because of the way that the state has violated our rights and broken up our families and communities.

White people say all the time "Why is everything political?" and I'm like, "As a person of color your existence is politicized."

Can you tell me about the march you spoke at and what the experience was like for you?

That whole week was a heavy week for all immigrants. I speak for myself, as someone who is Syrian and is directly impacted by the Muslim ban. As a representative of a community running the Arab American Association of New York, I represent a community of Yemeni people, Syrian people, and other impacted folks. For me, it's not just what I am experiencing, but what my community is going through. Seeing the sense of anxiety and fear heightened and the feelings isolation and not belonging.

Then having to deal with all of that while knowing that all of this is tied to keeping our family separated because that's the essence of the Muslim ban, to make sure that we're not able to reunite our families living overseas with us living here. And then seeing what this administration is doing on the border, exactly the same thing, denying the humanity of people who are crossing the border saying, "We're here because we seek asylum and made this incredibly dangerous trip because this is our last resort. And this is how bad it's gotten for us to have to do this and for us to be 'welcomed' into this country by having ICE snatch the children out of your hands and put you in detention centers and put children in cages." It's cruel and inhumane and immoral. Having to reflect on all of this just made me really sick.

But at the same time, standing up with folks from my community and with people from different immigrant communities and with allies into this bigger movement, where we are coming together and telling the administration that enough is enough. We did not sign up for this. This is not what we want America to be. This is not what we want our nation to be seen as. This is not how we treat humans. There is that sense of solidarity and something so beautiful about being in a space with all of these people and feeling like you're not alone.

I believe that our fight is going to be on the streets and is going to continue on the streets. We are going to have to come out and support each other and love each other. That's the only way we can overcome this and push our elected officials to do something about this. Before this whole movement, you were not hearing folks say "Abolish ICE!" We have created this momentum on the streets, through actions, through civil disobedience.