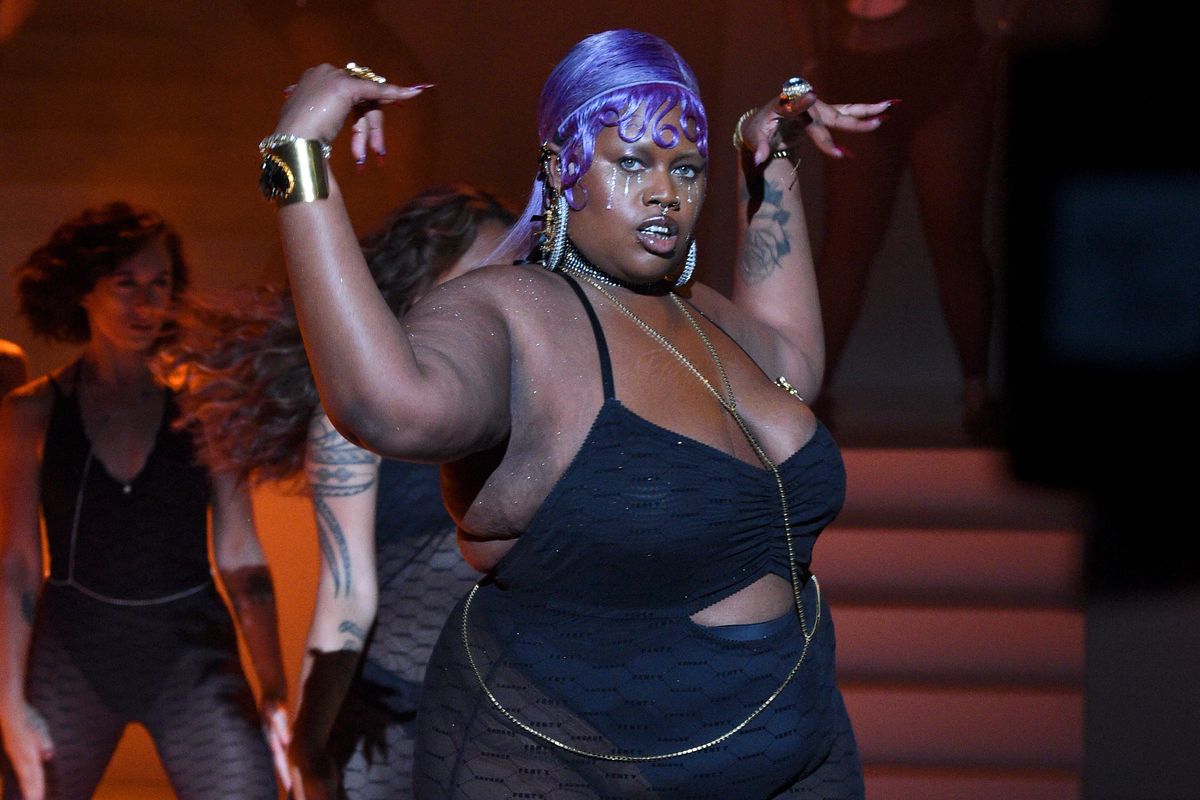 Rihanna's latest Savage x Fenty show — which was held on September 10th in Brooklyn and is now available for viewing on Amazon Prime Video — was a rightful sensation, an inclusive, fun extravaganza that should have Victoria's Secret executives shaking in their boots. The show featured everything from a dance performance from the Bad Gal herself to a Normani routine that went instantly viral to appearances from supermodels like Gigi and Bella Hadid, Cara Delevingne, and Paloma Elsesser. Laverne Cox walked! Fat Joe performed!

In the opening scene of the Amazon documentary about the show, Rihanna speaks to the camera in a car, saying that she's "looking for unique characteristics in people that aren't usually highlighted in the world of fashion." She stuck to her word, and she's been rightfully praised for her casting choices — Savage x Fenty featured models of all sizes, races, and ability, from across the gender spectrum. It just felt so good to watch.

Raisa Flowers, an accomplished twenty-something (she prefers not to reveal her age) makeup artist from Mount Vernon, New York, opened the show. Flowers, born Raisa Thomas, has an instantly recognizable look, like a downtown cyborg. And the Savage x Fenty show, she wore a black bodysuit, her purple curls slicked down, silver tears running down her cheeks. She danced, waving her hands elegantly. "I was thinking to myself, don't mess up," Flowers said over the phone from Milan Fashion Week. "And then I was like, you know what, don't even think about messing up. Just go kill it. And then my hands started to shake, as soon as I start doing the hand movements, it was so funny."

"I was like, bitch, you better start now," she said with a laugh. "And then I just started going with it. And it just felt good, because the crowd hypes you up. It's just intense."

Flowers, who has also modeled for brands like Gypsy Sport and whose work is widely admired in industry circles (she recently did the makeup for a PAPER Pride cover featuring model Aaron Philip), had no idea that she was even going to be in the show until the last minute, let alone opening it. She had planned to attend the Savage x Fenty event as one of the standing audience members, a specially selected group that was set to be filmed interacting with the models; the "hype crew," as she called it.

But then two days before the show date, she got an email from Rihanna's team, asking if she could come in for rehearsals with choreographer Parris Goebel. Flowers was exhausted from working backstage at multiple fashion shows, and it took her a beat to realize that her performance was set to run as the first of the models', directly after Rihanna's own time on stage.

"I was super confused, and just taken back," she said. "I was tired, running on 15 minutes of sleep, because I had to work at 4 AM that morning. So, it was crazy."

But it all worked out. Rihanna was ecstatic. After the show, "she came to us, and she was like, 'Oh my openers, my opening hoes, I love you,'" said Flowers. "And then she hugged us, and I told her I loved her and whatever. I had met her already, the last Savage x Fenty show. And [at last year's show] she held my hand, and told me that she loved me."

The entire experience was emotional for most of the models involved, and Flowers said she was particularly affected. Both of her parents are Caribbean, and her mother, like Rihanna, hails from Barbados. It felt personal.

"I talk about confidence and things like that, because it's important," Flowers said. "And, it's sad, but when I was younger, I struggled a lot with my self-esteem. If you would have told me I was doing this 12 years ago, I'd just be like, hell no. I would never show my body. I would never wear something like that."

She continued, "I was even saying to my mom, 'Do you remember when I used to wear jackets in the 90-degree weather, because I didn't want to show my arms?' Or I wouldn't wear skirts. I would just wear pants all the time, because I was so un-confident about my body. And that's because society always told us that you have to be small."

Flowers' appearance meant a lot to her friends, her family, her following, and really anyone who could watch the show and see themselves in her. Her close friend Junglepussy even posted video of Flowers to her Instagram story in which you could hear the rapper audibly crying. She wasn't alone!

"For me, [the show] was big, because it puts people who look like me on a different platform," Flowers said. "And, it allows people to see that they're able to do what they want, to be in those spaces and have those moments, and that people are checking for them."