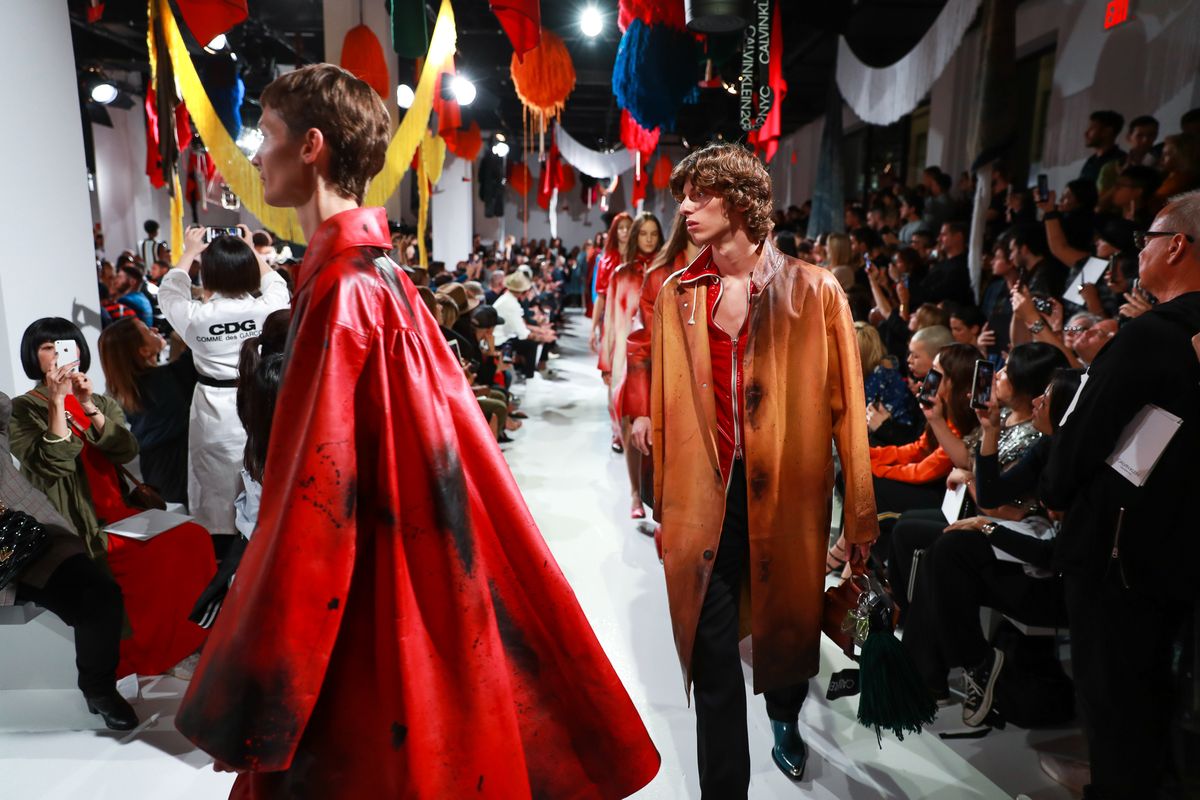 A house of horrors and dreams: that was the scene and vision for Raf Simons' Spring 2018 collection for Calvin Klein. His second for the iconic American label since his debut last February, he continued mining the American psyche of the last half century; Warhol, cowboys & cowgirls, cheerleaders, Hollywood. But this time, into his haunting edit of Americana, he added a streak of horror, or horror films more specifically, the Sterling Ruby set replete with dangling chainsaws and other classic film cues from the terror flicks of yore. It would be a mistake to equate a reference to scream queens Carrie or the Halloween series to the real terrors intrinsic to the American story of which Simons' is plucking but they set an apt mood for our current American chapter and the heavy lifting required to not just riff on American artifice.

The opening was a series of girls and boys in cowboy separates and boots, this time wrought in satin and mismatched color-blocked patterns. The proposition now already feels like a trademark of Raf at CK since last February and was a strong start. Hidden among this first section was something of a fashion dream ballet moment ala Agnes DeMille in Oklahoma! (an energy in the same cul de sac of this show); Kaia Gerber, the progeny of middle America, corn fed, glamazon Cindy Crawford, alighted in Annie Oakley sateen channeling her super-mom but yet, naturally, looking slightly different, the way a character does in a slumbering hallucination. A Gen Z, Calvin Klein Dream Laurey if you will. The effect was arresting and exactly the uncanny touch that drifted in and out of the show.

Among one of the lofty goals of Raf's hire last year was to finally move product at the RTW level and not just rely on the profits from fragrance and over-licensing. To wit, this collection was full of just the kind of things that feel salable: Warhol-printed separates (of which a simple tank top with the artist's screen print of fashion and media vet Sandra Brant—Sandra Brant, 1971— will be an insider must-have just watch) , delicious pom-pon bags in Ruby's signature yarny string, and also giant painted totes in sooty reds and greens. Also to be found were charming talismans of iconic CK fragrances like Obsession, perfect bait for the 90s nostalgist. Not to mention the 50s-shaped A-Line dresses in demure tea lengths, in what resembled a luxe nylon for tent fabrics, were exquisite fashion, something you could imagine a whole cross section of women falling in love with at the totally and exuberantly re-imagined Madison Avenue store.

With the likes of Jake Gyllenhaal, Ashton Sanders, Brooke Shields, and Lupita Nyong'o among the front row, the picture was appropriately Calvin then, now, and future, but the story was in the clothes and the striking Sterling Ruby mise en scene. A question we find ourselves asking is what the world thinks of us, of America, at this particular point, what with our careening foreign policy, embarrassing and terrifying President, and surfeit of natural disasters. Simons, a Belgian, and by definition an outsider of sorts, if an empathetic one, answered it last night on 39th Street; there can be both terror and hope, and usually something more in between.