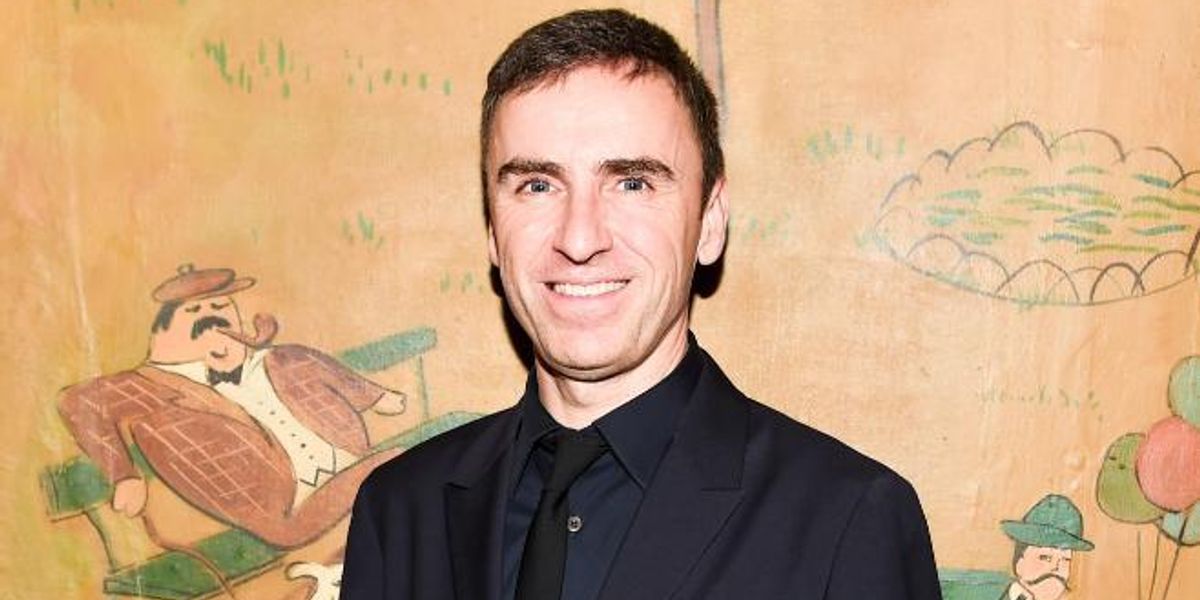 Does Raf Simons Have What It Takes to Be Calvin Klein's $10 Billion Dollar Man?

Earlier today the worst-kept fashion secret of the year was officially made public: Raf Simons was appointed as Chief Creative Officer of all Calvin Klein brands. It was akin to finally popping the question after carrying the ring around for a year that you and all of her friends picked out, collective sighs of "finally" heard along the corridors of 7th avenue, instagram and Facebook—where the brand made the announcement themselves. The rumors began at the end of last summer, even before Simons' departure from Dior and after nearly a year of speculating, we can expect the designer's first official collection for Fall 2017—though I would expect to see some Raf in the pre-fall collection traditionally shown in December or January.

Our protagonist arrives in New York at a particularly grim moment in American Fashion: Ralph Lauren is undergoing a painful and lay-off strewn molting under a new CEO after years of expansion, Donna Karan has been disemboweled and sold off, and Oscar de la Renta has become something of a poisoned chalice with the rather swift -- read: acrimonious -- departure of the great talent, Peter Copping, earlier this summer. Relative to its contemporaries, Calvin has fared pretty well under parent company PVH, with respectable sales, celebrity attachments and exciting campaigns (that's always been Calvin's thing). But the bubble had gone off the wine a bit in the last few years when it came to the ready-to-wear proposition. Francisco Costa and Italo Zucchelli, who designed womens' and mens' respectively and were let go earlier this year in anticipation of Simons' appointment, hewed close to the founder's minimalism and precious treatments of color and fabrics and were thusly were well-regarded among editors and critics for their respectable and lovely collections. But that's also more or less where the conversation ended. Where was the runway excitement and must-have pieces? So the PVH suits made their move once Simons' left Dior and his non-compete had run out (traditionally a year). Paramount to the appointment is that Simons' will have control over all brands as well as all "Global Marketing and Communications and Visual Creative Services." Which is to say, the ads and the stores—absent, however, is control of the beauty license and those campaigns, an integral part of Calvin's presence and message, but alas. What Simons' appointment means from the point of view of the brand is that they are looking for someone with a total vision that can create excitement and drive interest from all categories, high and low. The announcement also shores up a years long corralling of the various licenses and partnerships the brand had accumulated for its many brands, from jeans, swim, junior and home. Raf will run it all—along with his right hand, Pieter Mulier who will have the title of Creative Director.

But what to expect from Raf and his team? The arm-chair projections would say an idea of minimalism -- a descriptor at which the designer actually chafes -- and something art-tinged and even romantic, a quality he deftly brought to the austere, teutonic silhouettes of Jil Sander in the aughts. The hope is for something modern -- however one defines that at the moment -- and exciting, the way Helmut Lang made New York a city of ideas and not just commerce in the 90s. And perhaps more interestingly, is what New York will give to him? Will he interpret and celebrate the young men and women he finds here the same way he did for his early shows two decades ago that brought the teenage subcultures of Antwerp into the global fashion conversation? How thrilling. Not to mention that the Calvin Klein studio is essentially a finishing school for many of American fashion's finest, and for Simons' to mold and nurture the next few decades of talent is a tantalizing thought.

But many wondered, as these rumors chilled, why Simons didn't just want to take a break. Didn't he want to chill in Antwerp and focus solely on his namesake mens collection for a minute? His departure from Dior last October, citing the the unhealthy demands of the fashion machine and breakneck speed at which designers have to work, sparked an industry wide navel gaze into the broken system. So why would he jump back into a similar gauntlet? Well, it appears he will have much more control of this label, something he had only to a point at the highly infrastructured Dior, and the message that Calvin is giving him is more or less carte blanche. Which begs the question of how much housecleaning to expect? Will the Kendall and Beiber billboards remain and the Generation Z-targeted thirst continue apace? Frankly, I don't see it, and that is a risk PVF is presumably willing to take, given as ham-fisted as those ploys are, they work and attract the requisite buzz and clicks. But more importantly, how will he interpret the staples, the apparel cash cows that bring in those kids? In the last few years Vetements has completely reimagined denim at a designer level and Givenchy has purloined the fashion sweatshirts, former terrain of Calvin. How exciting would it be to see an amazing and interesting pair of jeans at your local Macy's? A lot has come between America and its Calvins since Brooke Shields purred about hers in 1980 and its about time someone brought us all back together—-and wouldn't it be major if they brought Shields back?

Predictions and prognostications aside, the message of today's appointment is crystal clear: Calvin Klein, a mass brand valued in the billions, is going all-in on fashion with a capital F, and betting on the vision of Raf Simons. Despite the endless designer musicals chairs we are now all but inured to, a pairing of this magnitude happens once in a fashion lifetime. And Calvin has made its intentions very clear: in the announcement they specifically cite a $10 billion dollar goal for global retail sales. So welcome to New York, Raf, Calvin's $10 billion dollar man.