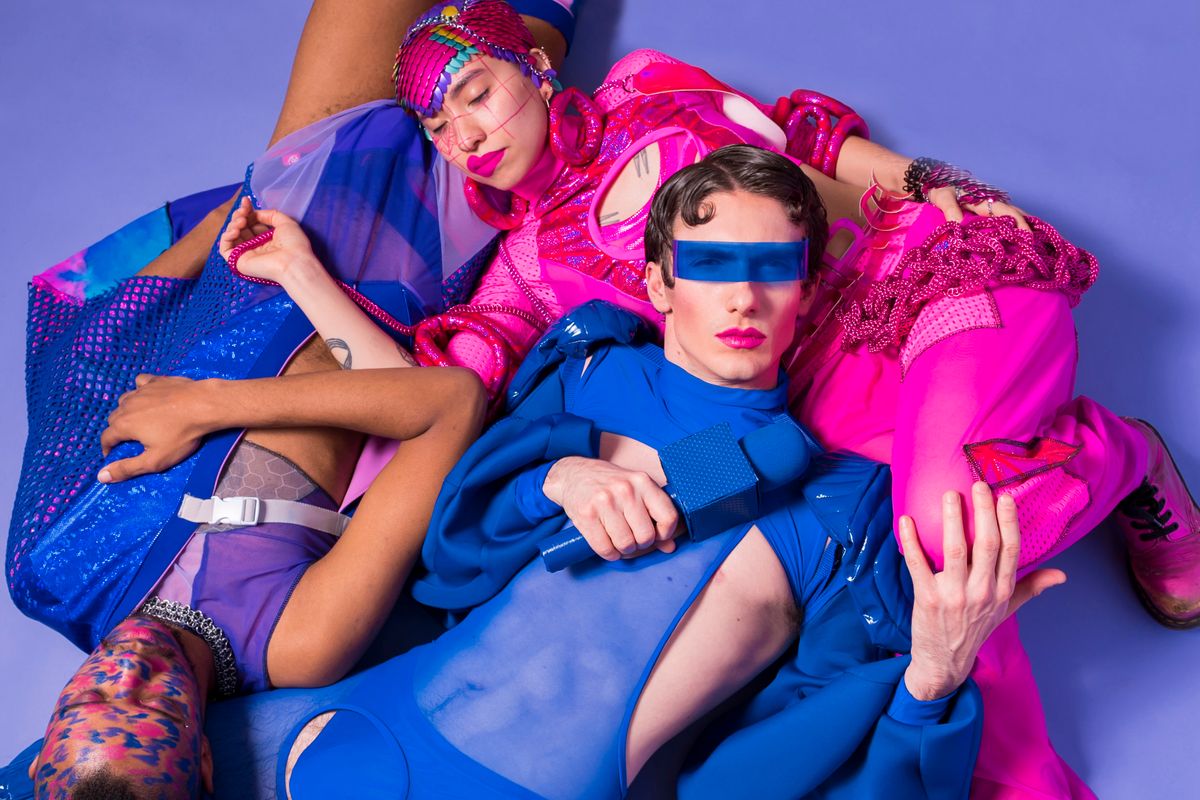 The Collective Making Intersectional Future-Fashion Accessible to All

The fashion industry has an intersectionality problem: Not only are people of color underrepresented, but also variations in sizes, gender identities, and abilities. Rebirth Garments is one line working to correct those disparities. Founded by Chicago native Sky Cubacub, its mission is built on QueerCrip identity: "A politicized umbrella term that encompasses queer, gender non-conforming identities, visible and invisible disabilities/disorders — physical, mental, developmental, emotional, et cetera."

Shiny unisex panties, binders styled as the pink-and-black queer anarchist flag, tanks with bright, abstract patterns, slip dresses, a textural mash-up crop top that gives freedom to both armpits and a nipple – and everything is fully customizable as binders or sports bras, or for packing or tucking – make for celebratory, dynamic shopping for all.

Related | Aaron Philip: Most Likely to Inspire the Next Generation

They'd previously worked together in various capacities, but a month-long residency at the Evanston Art Center in March gave the trio a new opportunity to hyper-focus on a QueerCrip collaboration.

The results of that work are a pioneering, wholly inclusive and immersive fashion experience: More than 25 "lqqks" for Rebirth Garments paired with a five-song album of original, undeniable bops that emphasize the line's ethos and describe five of the model's identities and garments.

Radical Visibility Collective has presented two full shows already (check the super-fun video for highlights from each, below).

The accompanying music shares similar influences, and then some; it's a "multi-collaborative feast," as described by Vogds, who wrote several of the songs, produced one, is featured vocally on four, and also worked directly with the beat-makers.

"Each song was a different collaborative process," he writes. "As a collective, we did the curation together, deciding who we were interested in working with on the album. For most of the songs, we tried to combine different styles/genres of queer vocalists and beat-makers to see what surprising dissonances and harmonies arose. However, one song, 'Glitter' was entirely created by the queer punk band EnGAYgement Party, which added a great contrast to some of the more clubby tracks on the album."

Considerable thought was given to the models involved, too. Many are Chicago artists and activists, some of them longtime or newfound friends of Cubacub. "The models are on the full spectrum of gender, size, and ability, meaning we are centering non-binary, POC, QueerCrip, fat, femme, disabled, neurodivergent, and trans folx," the collective adds. Outfits were custom designed, catering equally to the pride and vulnerability they expressed about their bodies.

The visual descriptions in the songs — identity, dance style, preferred pronouns — were also customized by the models themselves.

"Thus, the songs are an embrace of chosen identity and body positivity (not in the way that white thin folx have attempted to co-opted this term)," RVC says. "Also, each model was asked which beat-maker/vocalist combination they wanted to be described by, giving models more agency than a typical fashion show would ever attempt to."

Related | Rochelle Brock: Most Likely to Photograph a Movement

There's more in the works, most of it coming mid-summer: A mash-up music video, a lqqk-book zine, and two mini-performances at the Museum of Contemporary Art in Chicago on June 30. Items from the collection will go up on the Rebirth Garments Etsy bit by bit, though some one-of-a-kind pieces will only be available for rent in Chicago. As always with Rebirth Garments, commissions and customizations are welcomed.

And the Radical Visibility Collective doesn't end here: They've hinted that there will likely be additional collaborations and projects in the future.