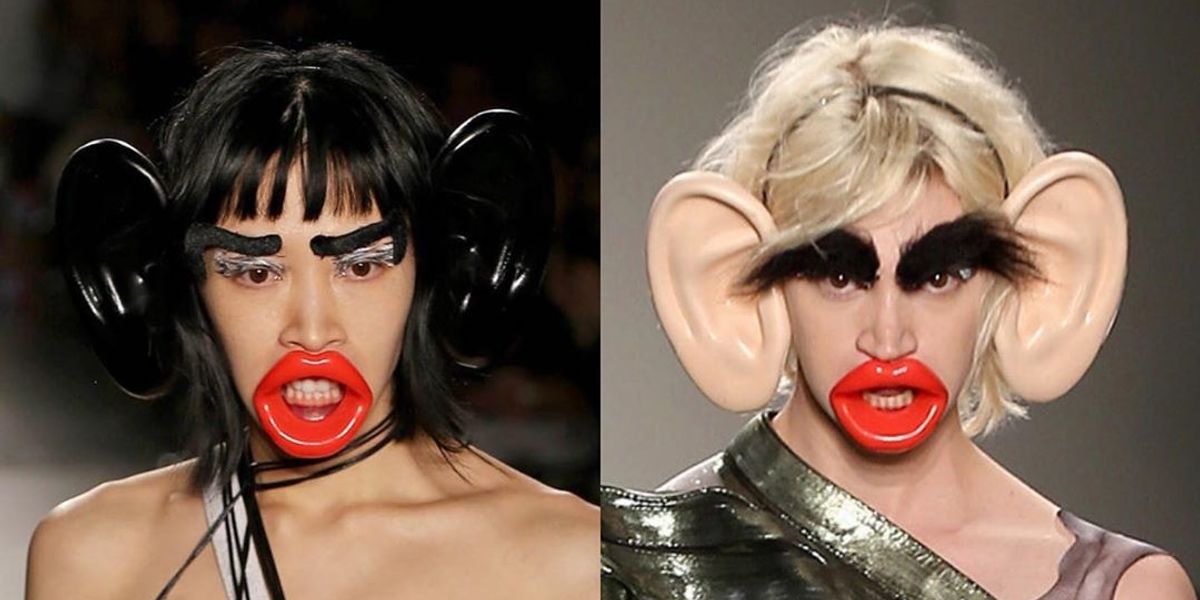 The Fashion Institute of Technology, one of the most prestigious fashion schools in the US, is under fire after a controversial student graduate runway show last week featured accessories on models like giant prosthetic lips, bushy eyebrows and "monkey ears" that were deemed offensive and racist by a large portion of the school's community and people online.

According to Instagram watchdog Diet Prada, the accessories in question were from MFA graduate Junkai Huang's collection that was meant to highlight the "ugly features of the body." One African-American model, Amy Lefevre, reportedly objected to wearing the accessories, but was told by staff that it was "ok to be uncomfortable for only 45 seconds."

Diet Prada ™ on Instagram: “It shouldn’t be down to the models to have to refuse wearing blatantly racist accessories on the runway, especially not in a show thrown by…”

Following multiple complaints by students and users since the show was held on February 7, FIT issued a detailed statement today by its president Dr. Joyce F. Brown responding to the backlash. "Currently it does not appear that the original intent of the design, the use of accessories or the creative direction of the show was to make a statement about race," Brown said.

"However, it is now glaringly obvious that has been the outcome," she continued. "For that, we apologize—to those who participated in the show, to students, and to anybody who has been offended by what they saw." Brown added that the school is "actively investigating" how this incident occurred. Read below for the full statement by FIT.

On Friday, February 7th, as part of New York Fashion Week, the FIT MFA program in fashion design held its first graduating students runway show at Chelsea Piers. There were over 100 guests in the audience to witness both their achievements and creativity. As many of you now know, there was an unfortunate and disturbing reaction to the show that I want to address.

As we understand it, some of the students and models involved in the show were offended by the accessories—large prosthetic ears and lips and bushy eyebrows—used to style one particular collection. Calling them racist, one model refused to wear these items and indeed walked down the runway without them.

Currently it does not appear that the original intent of the design, the use of accessories or the creative direction of the show was to make a statement about race; however, it is now glaringly obvious that has been the outcome. For that, we apologize—to those who participated in the show, to students, and to anybody who has been offended by what they saw.

Let me be clear: no person should be made to feel uncomfortable—particularly about race—in service of their work, job, livelihood, or course of study. Right now, we are actively investigating how this happened. And as you'll read, we have outlined several steps to address the concerns and questions of students, faculty, and our community. We take this very seriously and our response and actions going forward will reflect that.

It is my position that all students must be afforded the safe space and freedom to learn and develop their voice, even if the voice is provocative to some. At the same time, I am deeply committed to creating a teaching and learning environment in which people are not offended or intimidated. There is a balance that must be struck between these two imperatives, one that is not always easy to find, but it is the college's responsibility to find it. As both a former faculty member and an administrator, I appreciate how fine a line there is to draw between these two.

Consequently, we must, as educators, be certain we are providing students the cultural and historical perspectives they need as they realize their artistic vision. Simultaneously, we must provide guidance so that they recognize and respect potential risks and unintended consequences of their creativity. Regrettably, we failed in this instance to recognize a creative statement that could have negative consequences. Regardless of intent or artistic vision, we must be continually aware of that which constitutes an authentic artistic expression, and that which creates a risk to the intended message and interpretation of the art form. There is no room for error which can be interpreted as racism, homophobia, religious intolerance or any other kind of bigotry.

In the days and weeks that follow, as mentioned above, we will be taking several steps to address the concerns of our community. We will be engaging with our Diversity Council, our Faculty Senate, the UCE and the Student Government Association to continue this important conversation; we will put in place safeguards to ensure that a situation like this will not happen again; and finally, there will be an ongoing investigation about the event itself—how it occurred, who was involved, and why there was no immediate follow-up.

This is not the moment to simply remind ourselves of all of the good and productive efforts we have made in the name of diversity, inclusion and civility. I have said that civility and diversity are a work in progress on this campus. We have to recognize as individuals and as a community that we cannot be complacent and that there is still much work to be done—and I am personally committed to making that happen.