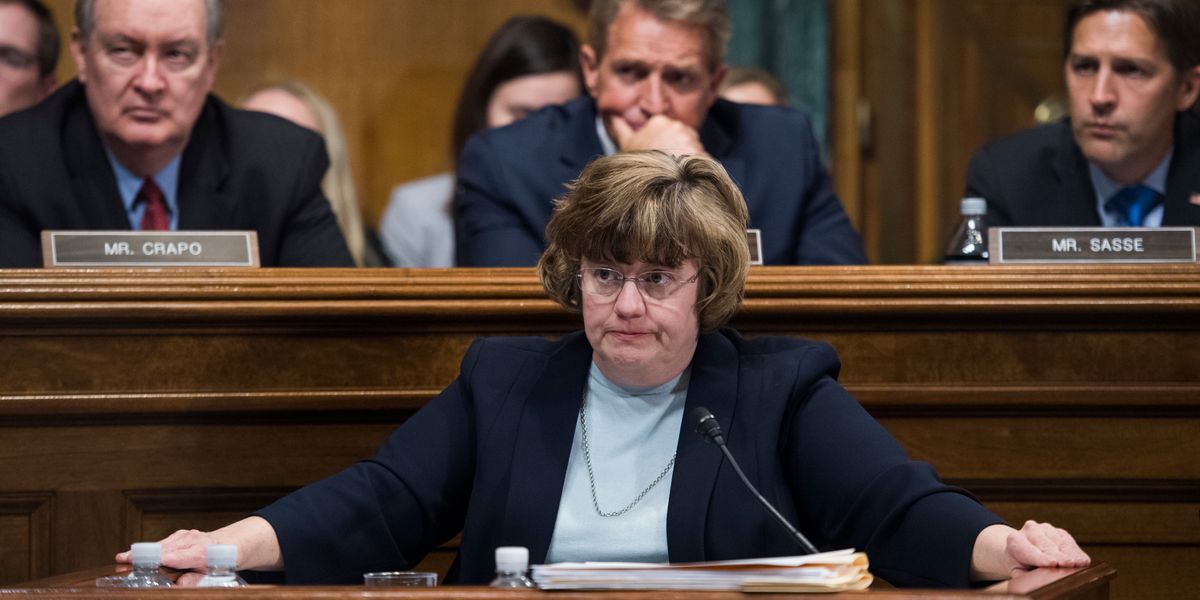 Rachel Mitchell, the Arizona prosecutor who was selected by the GOP to serve as a surrogate for the Republicans on the Senate Judiciary Committee to question Christine Blasey Ford, has issued a five-page memo casting doubt on Blasey Ford's credibility and arguing that "a reasonable prosecutor would not bring charges against Kavanaugh."

Last Thursday in her testimony, under oath in front of the Senate Judiciary Committee, Christine Blasey Ford stated that she was "100%" certain that Brett Kavanaugh was the man who attempted to rape her as a teenager. Kavanaugh repeatedly denied the assault.

Mitchell—who it's widely understood was hired as a a human shield in order to avoid the unflattering image of the eleven white male Senate Judiciary Committee Republicans grilling and meticulously seeking to undermine Blasey Ford's credibility—summated: "A 'he said, she said' case is incredibly difficult to prove. But this case is even weaker than that."

Revealing remarkable alignment with views of the Republican senators who hired her, the prosecutor cited inconsistencies with Dr. Ford's testimony between its various public retellings.

Just as Kavanaugh repeated his testimony, Mitchell focused on the fact that Mark Judge, Patrick "PJ" Smyth" and Leland Keyser stated that they do not recall the party where the assault allegedly took place: "Dr. Ford identified other witnesses to the event, and those witnesses either refuted her allegations or failed to corroborate them."

It's been emphasized that there would be little reason for Keyser and Smyth to recall the the otherwise unremarkable event, as they were unaware of that the alleged incident took place, and fails to note that Leland Keyser clarified that she "does not refute [the] account" and has repeatedly told the press that she believes Blasey Ford.

The account stressed that Blasey Ford "has struggled" to name Kavanaugh each time she repeated the incident, citing the two therapy sessions in which she spoke of the event, but the therapist did not record Kavanaugh's name.

Failing to acknowledge the reasons why Blasey Ford might not have wanted or felt the need to use Kavanaugh's name to speak of the incident to her therapist or friends, Mitchell suggested that she only began using Kavanaugh's name when it started to appear in the press, linking her husband's claim that she named Kavanaugh to him in 2012, to the fact that Kavanaugh was receiving attention in the press as a potential Supreme Court nominee if Mitt Romney won the Presidential election.

The memo also discredited Blasey Ford by poking holes in explanation of how her trauma has manifested.

The memo neglects entirely to offer analysis Brett Kavanaugh's credibility, his testimony, and the strengths or weaknesses of the evidence his team has presented to prove his case.

This is despite the fact that on Sunday, echoing others, one of Brett Kavanaugh's close friends from Yale issued a statement on Sunday claiming certainty that Kavanaugh lied under oath about his drinking habits in his testimony.

Mitchell admits in the memo that she is a registered Republican, but claims she is "not a partisan or political person" despite being an employee of and proxy voice for the Judiciary Committee's Republican senators.

The New York Times reports that she is a career prosecutor who works in the Maricopa County attorney's office in Arizona, and has overseen some of the state's highest-profile sexual assault cases, and has won several awards for her work.

Analyzing a 2012 interview she gave to FrontLine Magazine, a publication associated Foundations Baptist Fellowship International—which last week ran an article on the #MeToo movement claiming that women fabricate allegations of sexual assault—Jezebel notes that Mitchell's sympathy focuses on the innocence of children and victims of clergy, some of the only victims of sexual assault conservatives have been willing to offer support for.

Ultimately, as she was always intended to do, Mitchell has regurgitated with legal flourishes the GOP's narrative, designed to push Kavanaugh's nomination through.

Mitchell acknowledged that the hearings were not a court of law and that Kavanaugh's nomination is not a matter of criminal prosecution, ("the world in which I work is the legal world, not the political world. Thus, I can only provide my assessment of Dr. Ford's allegations in that legal context"), however it's being remarked upon as a prosecutor who has stated that "false accusations are very rare," Mitchell would not at very least echo calls for an FBI investigation. Read the full memo here.

Republicans have agreed to delay Kavanaugh's confirmation for one week in order to allow for an FBI probe into the allegations, after the Senate Judiciary Committee on Friday voted to advance the nomination of Kavanaugh.

Others are criticizing the memo's conclusions and Mitchell's integrity as a prosecutor:

I wonder if Rachel Mitchell, the career prosecutor who helped the GOP with their optics yesterday, thought about ho… https://t.co/DXvcx1qotZ
— Aditi Juneja (@Aditi Juneja)1538141321.0