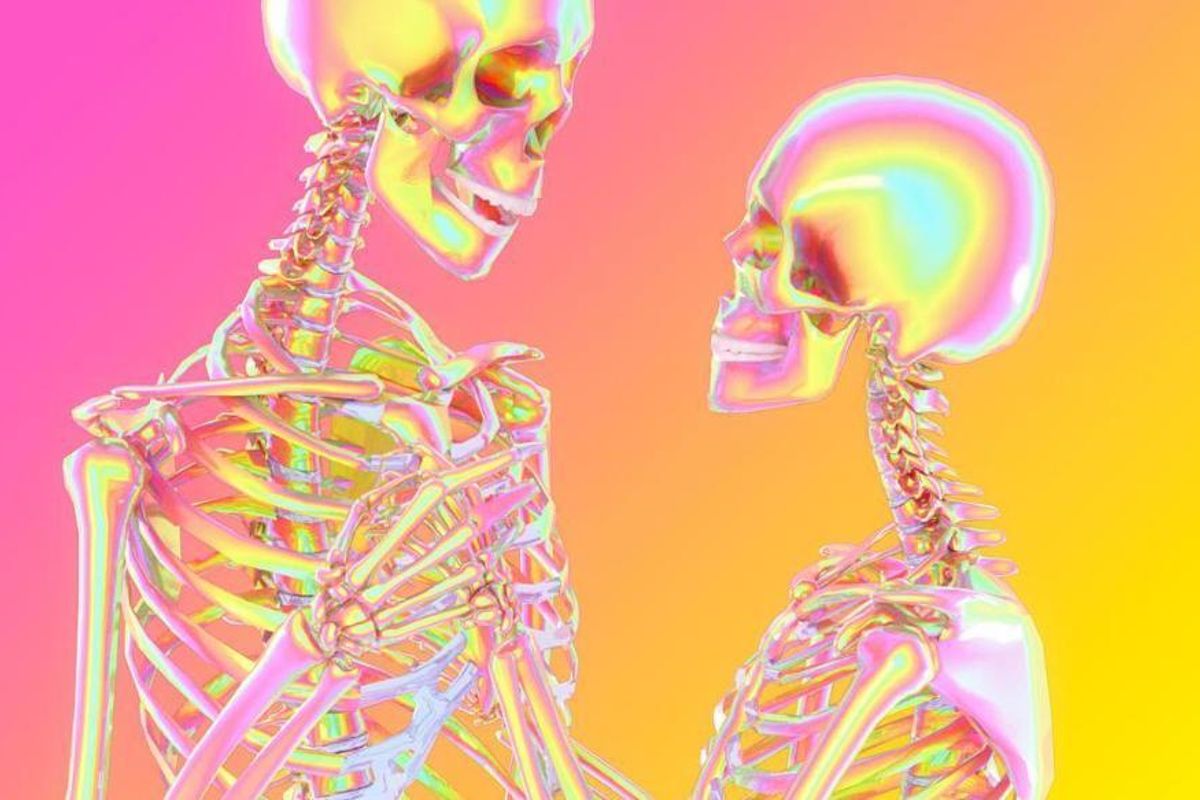 Meet the Artists Behind "QWERTY, Flirty and Crying"

It's always fascinating to see how art works created for an online space translate IRL, and we're sure that a new show opening tomorrow at Los Angeles's Big Pictures gallery -- appropriately-titled QWERTY, Flirty and Crying -- will definitely take this juxtaposed dichotomy to the next level.

A group exhibition between four friends -- Ambar Navarro, kyttenjanae, Arvida Byström and Brittney Scott -- united by digital femininity and an interest in "different aspects of being female on the internet", it's a neon-lit, pastel pink meeting of some of the brightest creative forces working with everything from Maya to Microsoft Paint today. Spanning disciplines, programs and platforms, as well as conceptual themes that run the gamut from empowerment to vulnerability, each of these artists bring their unique perspective to a show that addresses the universal experience of existing online today.

So ahead of everything, we talked to the artists via the ever-appropriate medium of email about everything from anonymity to Applecare, and how emotion (and embracing it wholeheartedly) plays into it all.

How would you describe each of your individual practices?


kyttenjanae: Polished, emotional, viral and pretty. I'm interested in the intersection of art and the Internet. I'm trying to make work that makes people feel something. I hope to inspire moments of reliability and make people feel less alone. We're all just out here on the Internet trying to connect to something.

Brittney Scott: I mostly do digital stuff, but I've been working a lot with neon light this year. The piece I have in the show is neon. My art is based on people -- the recurring theme is equality/gender issues. I like to make stuff that brings light to serious issues through humor.

Ambar Navarro: I always lean towards making video or digital work. I went to film school and studied experimental animation, so for a long time I wanted everything to be a moving image. Now I'm making some more physical pieces -- I have a large print and 2 acrylic pieces in this show. I'm interested in making work that is personal yet relatable and also informative. I like learning about online surveillance and the darknet, but also the darker side of people's lives. Obsessions, broken relationships, and the loss of friendships has been a reoccurring theme in my work, but I still try to make it playful and even entertaining throughout. My piece "iCare" is a good example of that. Even though I was literally cry-chatting with an Apple specialist about my personal problems, I inserted some funny texts, like when she recommended some of her favorite songs (they are super cheesy but I appreciated her effort) to add some links and humor.

Tell me a little bit about how you guys put this show together -- is there a mastermind behind the whole effort or was it more of a collaborative thing?


BS: [It was a] collaborative effort. It was easy for us to come together cause we all have similar views and our work compliments each other. The vibe of the show is femme/tech and what it is to be a girl online.

AN: Brittney, Arvida and I had a meeting with Doug Crocco -- the gallery owner at Big Pictures Los Angeles -- where we all showed him our individual works and sat around with our laptops talking about a possible future show. He then suggested we go a group show together and adding kytten seemed perfect since we're all friends here in LA and make work about ourselves and being online.


What unites all your work -- aesthetically and/or conceptually?

BS: Aesthetically, we all have strong digital brands and use similar colors. Specifically for this show, we wanted to use a lot of pink. Conceptually, "girl power" and strong emotions.


AB: I'd say colors? I mean, we all know there are plenty different sides to being a woman, but the four of us are seemingly pretty similar and probably from similar-ish backgrounds. Though to be honest, I don't really know too much of any of you guys socioeconomic background. [But we all] have pretty different practices. I come from photography, Ambar from stop motion [animation], Brittney from a pretty experimental practice and Kytten does CG.


KJ: I think on some level we've all connected with each other because we're unique girls who have figuratively found a home and companionship on the Internet. I'm willing to bet all four of us have deeply nostalgic relationships with the web in our formative years, and that's sort of a guiding thread through our work now.

Can you elaborate on what aspects of "being female on the internet" you're trying to tackle? What are some of the big recurring themes of your work in this exhibition?

BS: My piece specifically is about the exploitation of girls online -- their bodies and emotions -- whether it's themselves doing it or other people. The Internet just seems to be infinite space of girls!

AN: As far as gender goes online, my favorite thing about the Internet is having the power to be anonymous or female or genderless. I don't necessarily take part in selfie-culture or using my body (as of now anyway), but what I like about being online is it gives you the option to be who you want to be and provides a safer space to do so. I constantly feel like I have to deal with creepy guys or unwanted social situations on a daily basis, but being online is an in-between of being myself or choosing the situation. Or just block whoever you want, lol.


KJ: I'm never good at answering this. I know I'm hyperaware that I'm sometimes treated differently because I'm a woman making art in a technological space. Often that manifests itself in less representation and compensation. That part sucks. But also I'm deeply into owning my femininity because that's a huge part of who I am as a person and I put all of myself in my art.

The title of the show is interesting to me, since it feels like a good encapsulation of what it is to be a young woman on the Internet today. Why do you think the sad girl trope still pervades internet culture though? Do you guys feel like that's a big part of your identities and will be for the long term?

BS: I think there's a statistic that the majority of Internet users are female. I'm often titled with "sad girl" but I like to see it as more "emotional". It's definitely just who I am and the older I get, I understand it better. It's interesting to me how taboo it is to be open with your emotions. I think the "sad girl" wave reigns because it's relatable to everyone.

AN: I hope I'm not only remembered for being a sad girl on the Internet, lol. I use it more to document what I was feeling at the time. If I make a piece about a breakup it helps me get over the situation and also marks a time in my life when I felt that way. I think this trend of sad girls online is empowering to people to show that it's okay and normal to be emotional. Being a sad girl on the internet isn't anything new, it's just being more out there in the open. I don't know if the trope will ever go away if sadness never does. I don't see it as part of my identity, I see it more as making personal work or work that highlights that certain emotion.


KJ: Personally, I've always felt like an outsider and I've always felt sad. It's some combination of having a learning disorder at an early age and always being a weird art kid and spending too much time online in my youth. It's less of a trend and more like just the state of my mental health. Sad culture is cool because I can express myself in a space and relate to others and have others relate to me. More importantly, I think sad culture has made it more socially acceptable to feel anything publicly and privately. There's some empowerment in embracing that part of your identity. It's cool to care about stuff and feel feelings. It's not really a phase or something I see going away, but I think it'll grow and evolve with me as I grow in my practice!!

What else do you guys have coming up?

BS: I have a group show and solo show next month and hopefully future things with these girls :)

AN: I have a solo show in December at Leimen Space in Chinatown, LA. I'm going to create my Paris Hilton x Apple Store dream!

AB: I'm working on a book with Molly Soda consisting submissions of photos that have been removed from Instagram due to breaching (and sometimes very ambiguously so) the community guidelines.


KJ: I'm making stuff for Adult Swim and have some shows coming up.