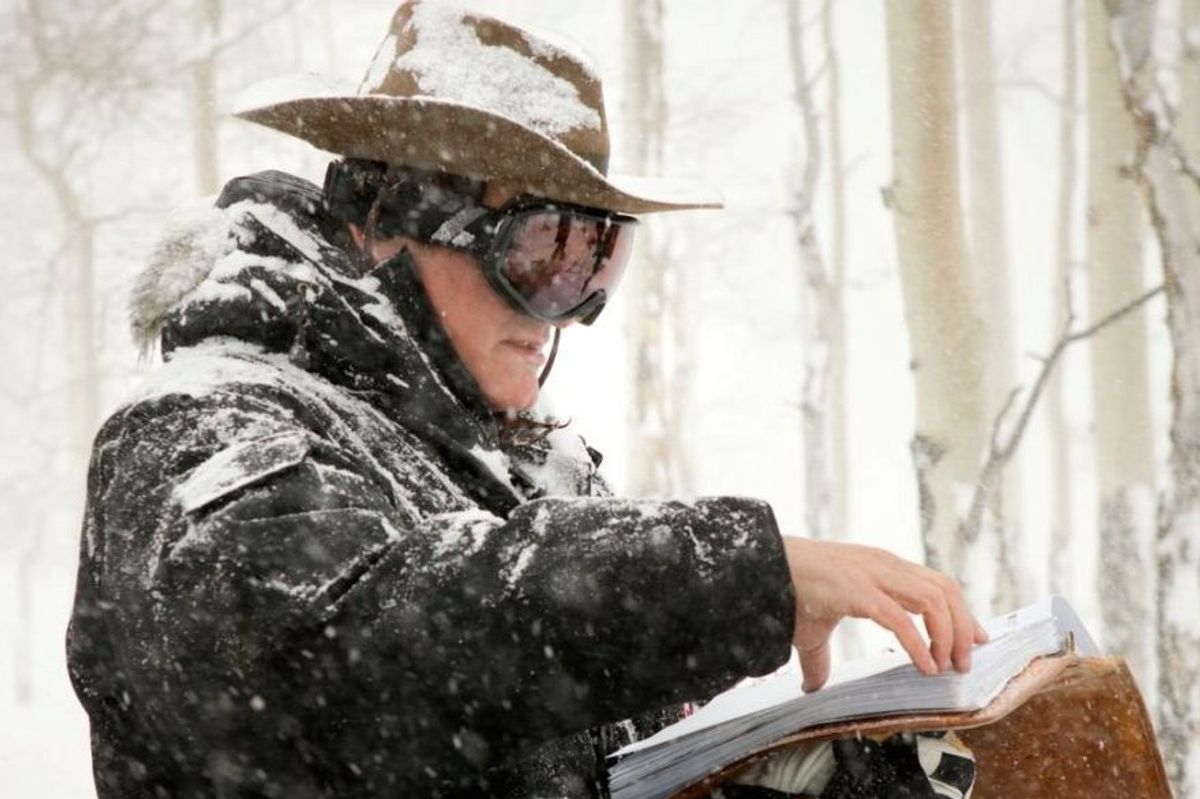 In a time where movies are either awards hopefuls cobbled together with duct tape or overblown CGI slugfests that serve merely as advertisements for toy lines, it often seems that the modern American auteur is all but dead.

While a handful of modern directors remain above-the-title brands, few elicit nods of appreciation from critics, serious cinephiles and fans alike as Quentin Tarantino. He's spent 23 years so far proving that "period piece" needn't equal boring, that action movies are far from a young man's game, and that seemingly passé qualities like writing, story and characters are paramount on screen. The Hateful Eight is a ballsy, hilarious, talky and blood-soaked romp that proves the enfant terrible who got his film education in a Manhattan Beach video store had plenty of lead in his pencil yet, digital be damned.

What does using 70mm do when it comes to the actors? It seems very intimate.

You've actually kinda answered your own question. One of the tricks that I thought about was the intimacy that it provides you in between close-ups. I've shot a lot of close-ups of this man right here [points to Samuel L. Jackson], but I've never shot him as beautiful as I did in this movie. I think you find yourself taking backstrokes in his eyes.

When it got reported that I was going to do it in this format, people were like "Oh, yeah. That sounds really great, but why would he do it for a thing that's set so far back?" That's not very profound thinking when it comes to 70mm, that it's just basically for shooting travelogue or shooting mountains scenery or nature and stuff.

I felt that, especially in bringing it to Minnie's Haberdashery, 70mm film is suspenseful, i.e. the pressure-cooker situation of what's going on in the movie. If that's not part of it, if the threat of violence and the pressure-cooker situation, if the temperature isn't always getting up a notch every scene or so, then the movie's going to be boring, it's not going to work. I actually felt that the big format would put you in Minnie's Haberdashery. You are in that place. You are amongst those characters. I thought it would make it more intimate when I got in close with them.

But the other thing I thought would be very, very important is there's always two plays going on in this movie, once you're in Minnie's in particular. There's the characters that are in the foreground of any given scene, and then there's the characters in the background. You'll always be having to keep track of where everybody is. It's like they're pieces on a chessboard. You always have to see them. So maybe it might be Chris Mannix and General Smithers who are dealing, but you're also clocking Joe Gage at his table and you're clocking John Ruth and Daisy at the bar. That becomes important, unless I want to cut them out and not show it to you. I think that helped ratchet up the tension as things went on.

Doesn't 70mm also mean you have shorter takes because the magazines are shorter?

Panavision came up with a 2,000-foot mag, so we were able to shoot for 11 minutes at a time. I can't even imagine doing this material if we had to break it up in four minutes go's. We had to do it like that. The Weinsteins were very generous with me, so I didn't have to dole out the footage in a certain way. I wasn't completely cavalier about it, but I didn't really change my shooting style for it. That wouldn't have been the idea, to completely change my shooting style. I shot the way I wanted to shoot.

As a filmmaker, you're always more interested in the past. How would you tackle looking in the other direction away from the styles and genres we know you for?

That's a really interesting idea. I don't think anyone ever proposed it exactly the way you proposed it to me. Everyone always talks about the science-fiction genre in particular, which always makes me think about people in spaceships. I can appreciate that, but that's not really where I think my dramatic aspect lies.

Now the way it was proposed it before, I don't think I ever thought about it as far as dealing with a future society, like what would that entail? What would it mean to jump 20 years or 50 years or a 100 years in the future and really look at it from that point of view? I never really thought about that before, but that is a profound thought, I have to admit.

How does a period film allow you to comment on the present day?

I'm not saying it's a bad thing to do, but when you try to deal with prescient themes in the present, that is what you're doing, that is the railroad you're building, and that's where that train is going. That can actually be fantastic. We can all point at the version in cinema history that has been profound.

I do like putting scenario first. I do like putting story first. I actually like masking whatever I want to say in the guise of genre. I can say it with my left hand and then do with the right hand what the genre dictates. However, in this instance, in particular, it's one of the benefits of the Western genre. I think there's no other genre that deals with America better in a sub-textual way than the Western made in the different decades, i.e. the '50s Western very much put forth an Eisenhower idea of America, an American exceptionalism aspect of it, whereas the Westerns of the '70s were very cynical about America.

It was a drag that the first draft of the script got out when it did. However, as we were making this movie during that last year and a half many of the themes we were dealing with we were watching on television when we got home. We would come to the set, and we would talk about them. The one good thing about the script getting out there is I'm on record for having written this before all this shit started popping off.

What do you make of the police union and their threats?

I'm not worried, because I do not feel that the police force is this sinister, black-hand organization that goes out and fucks up individual citizens in a conspiracy kind of way. Having said that, civil servants shouldn't be issuing threats, even rhetorically, to private citizens. No, I don't have any idea... the only thing that I can imagine that they are planning to do is picket at one of the screenings or something like that. Maybe picket at the premier. Maybe picket some of those limited screenings or something like that. I haven't heard a lot about it other than the Patrick Lynch is keeping the fire on simmer.

I think all that was put into place about 30 years ago when we declared a war on drugs and started militarizing the police force. You're not going to have the police force representing the black and brown community if they have spent the last 30 years busting every son and daughter and father and mother for every piddling drug offense that they've ever done, thus creating mistrust in the community. At the same time, you should be able to talk about abuses of power. You should be able to talk about police brutality and what in some case is, as far as I'm concerned, outright murder and outright loss of justice, without the police organization targeting you in the way that they have done me.

You're also one of the last directors to not fall victim to political correctness.

I don't have much thought on that other than the way you're asking it right now. I just don't think about it that way. One can be inclined to just say, "Oh, F this political correctness. I don't have time for that." But in polite society, there is such a thing as sensitivity to some issues as time has gone on, and there was a time that we weren't politically correct at all. We all wince at moments that we went past. We see that. I don't really know what the answer is as far as that is concerned.

However, me as an artist, I don't really think about it at all. It actually is not my job to think about that, especially in terms of with me as a writer, it is my job to ignore social critics, or the response that social critics might have when it comes to the opinions of my characters, the way they talk, or anything that can happen to them. We can talk about the race stuff, which we've actually talked about.

But I'm sure some people sitting here in the room might be uncomfortable about the violence that is handed out to Jennifer's character, and actually I'm playing with that in the course of the movie. When she gets that crack in the head by John Ruth at the beginning, that's meant to send a shockwave up through the audience. You're meant to think.

You're not necessarily meant to like Domergue in that moment, but you are meant to think that John Ruth is a brutal bastard at that moment because that does seem a rather overreaction to what she did and what she said. Time goes on, and you see how you feel about the characters. It's meant to do that, but there is this aspect of the way the story works in general.
The way the story works, part of that tension that we're talking about, the pressure-cooker that we're talking about, anything can happen. Anything can happen with these characters. Any piece of outrage or violence could happen to them. I painted a system where there aren't color-book lines. I can cross lines the way graphic novels — I don't mean graphic novels as in a comic book — but with novels that deal with violence. Almost any scene can go anywhere in a way that movies aren't allowed to go. In that scenario – what, I'm going to make it that seven of these characters anything can happen to them, but when it comes to this eighth character I have to protect her because she's a woman and she can't have the destiny of any of these other characters? No. That goes against the entire story. I'm not going to think like that.

When I think basically of an artistic hero in that predecessor way when it comes to that, I think of somebody like Ken Russell who was raked over the coals by the press in England constantly for the boundaries that he pushed. He said, especially in response to something like The Devils, do you let these people get you down? I don't think about them. I can't think about them. It's my job not to think about them. Because I believe in what I'm doing 100 percent, and I am doing what I'm doing. If you don't like it, don't go see it.