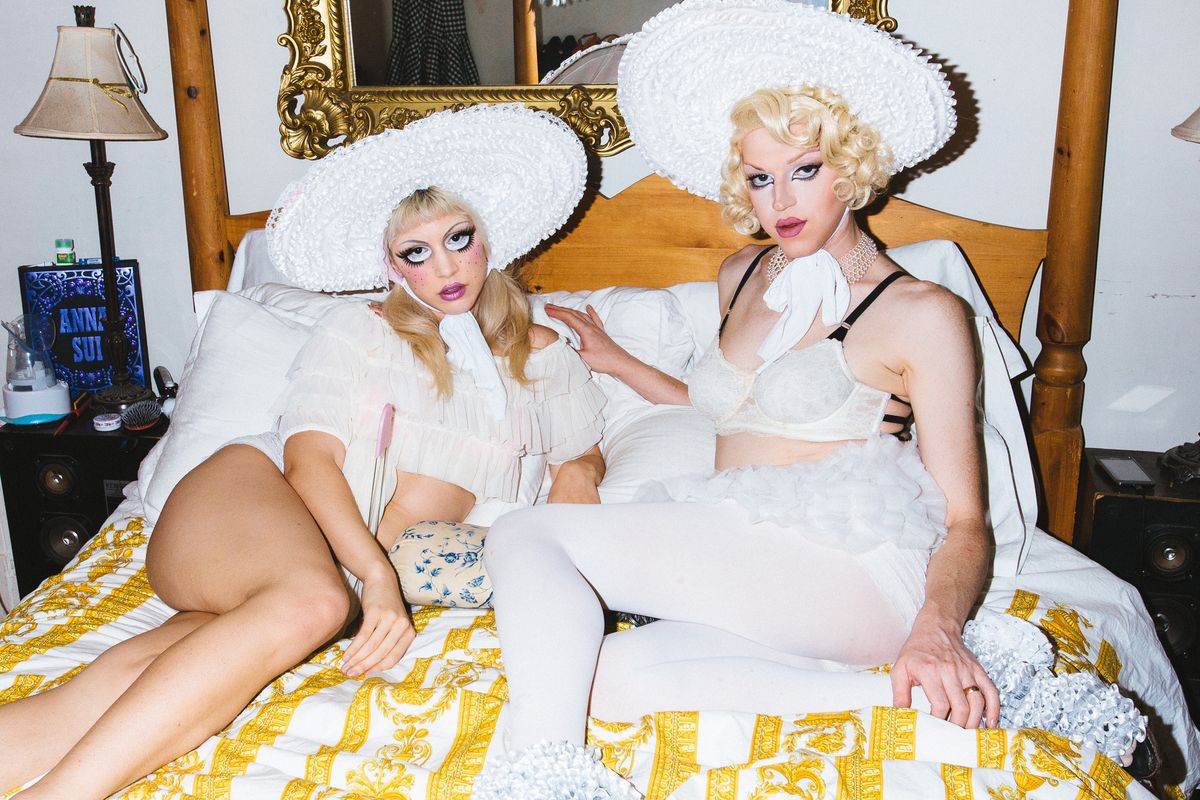 A Night Out With Nightlife's Favorite Hetero Married Drag Queens

We pre-game and hit the town with real-life couple, Queen Sateen and Exquisite 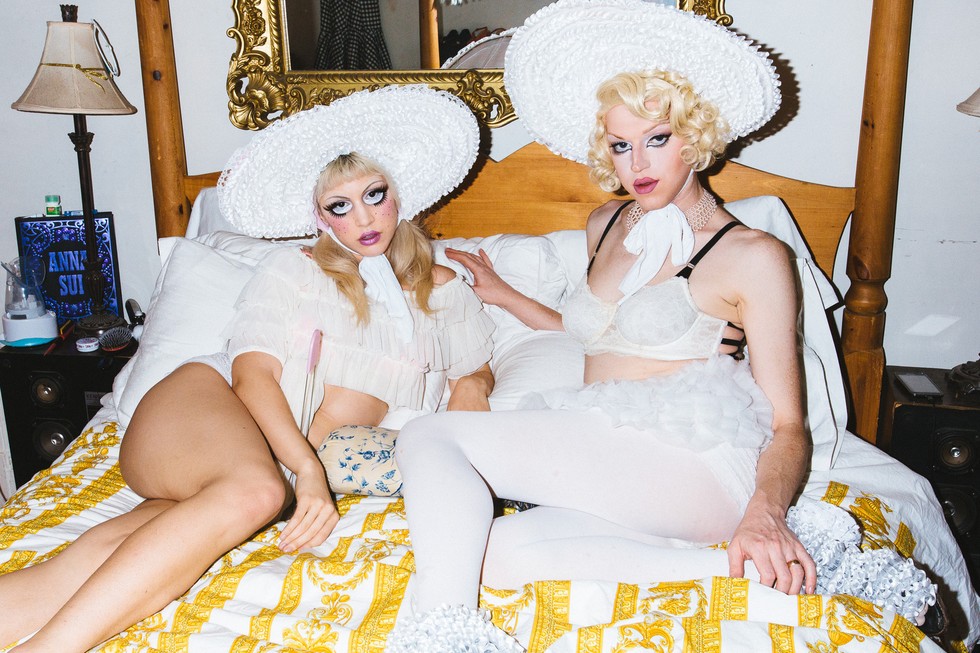 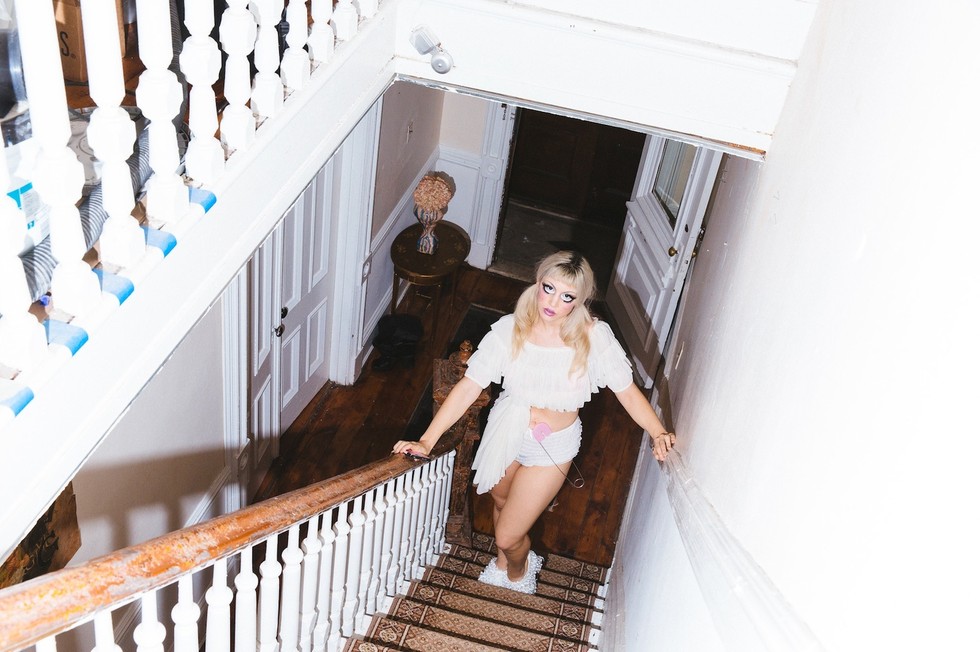 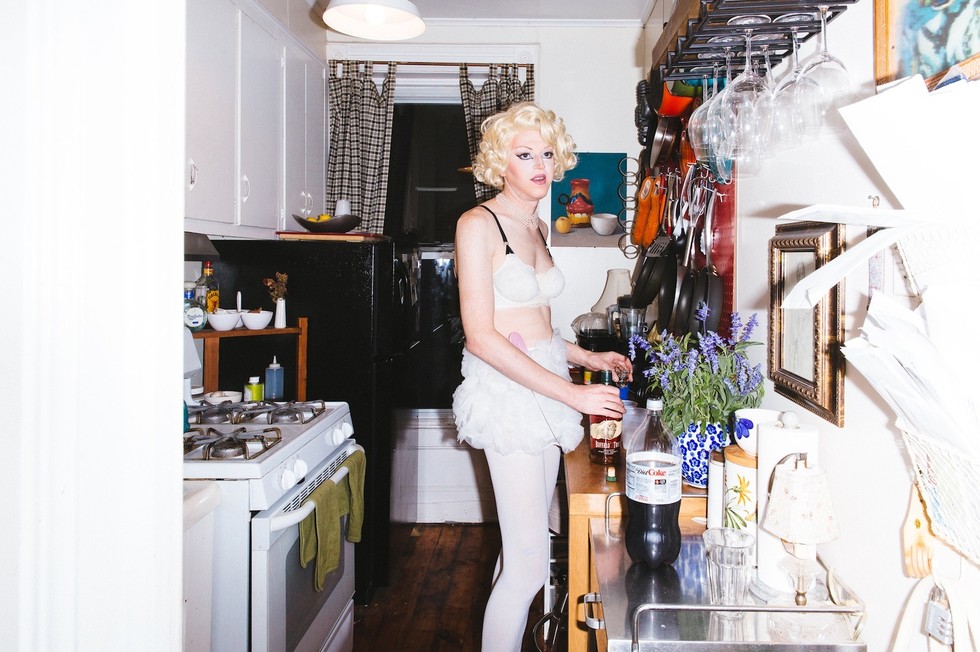 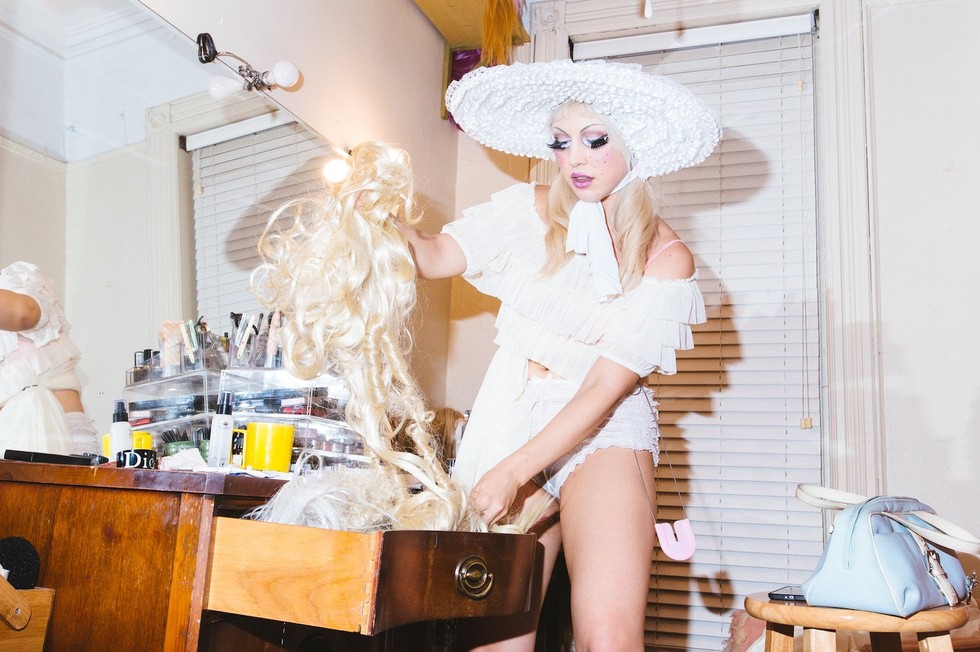 Sateen: "When we shop in stores, our taste is what nobody else wants. So it's going to be there whether you're there too early or too late, or whatever. It's very specific: we only want before 2005 and after 1989." 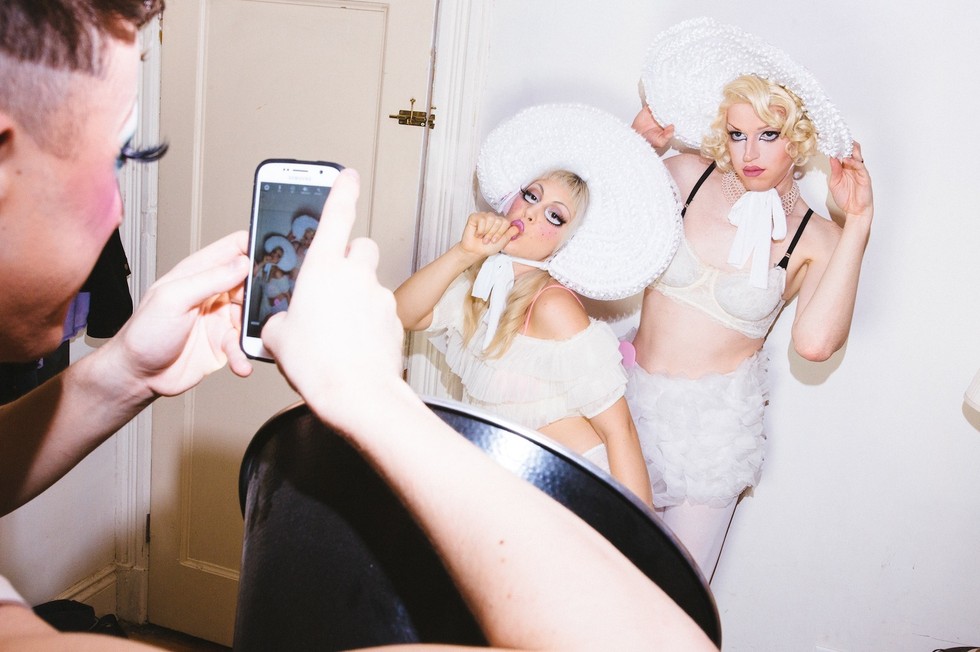 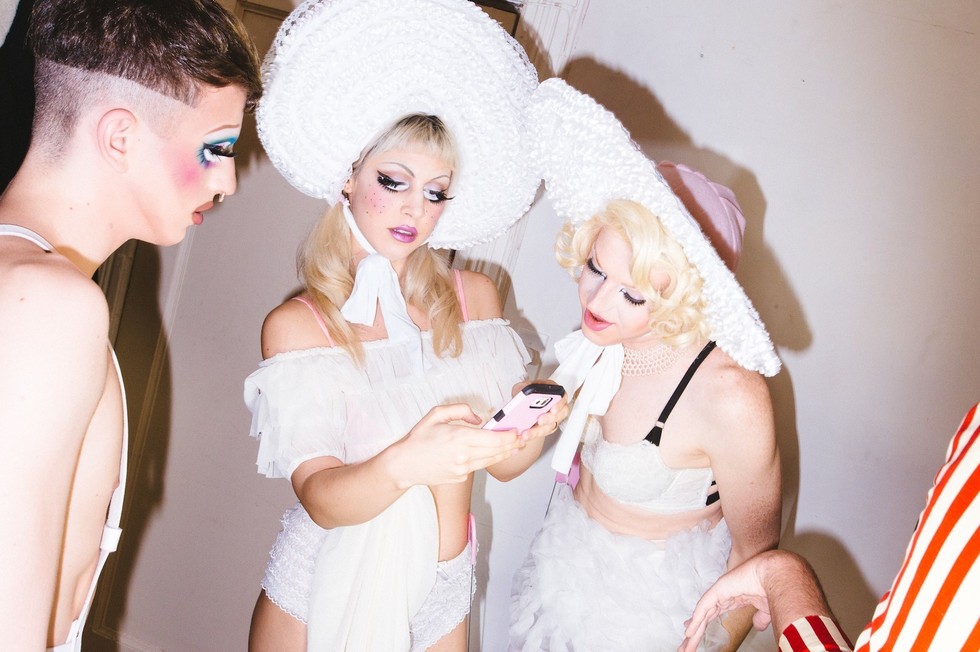 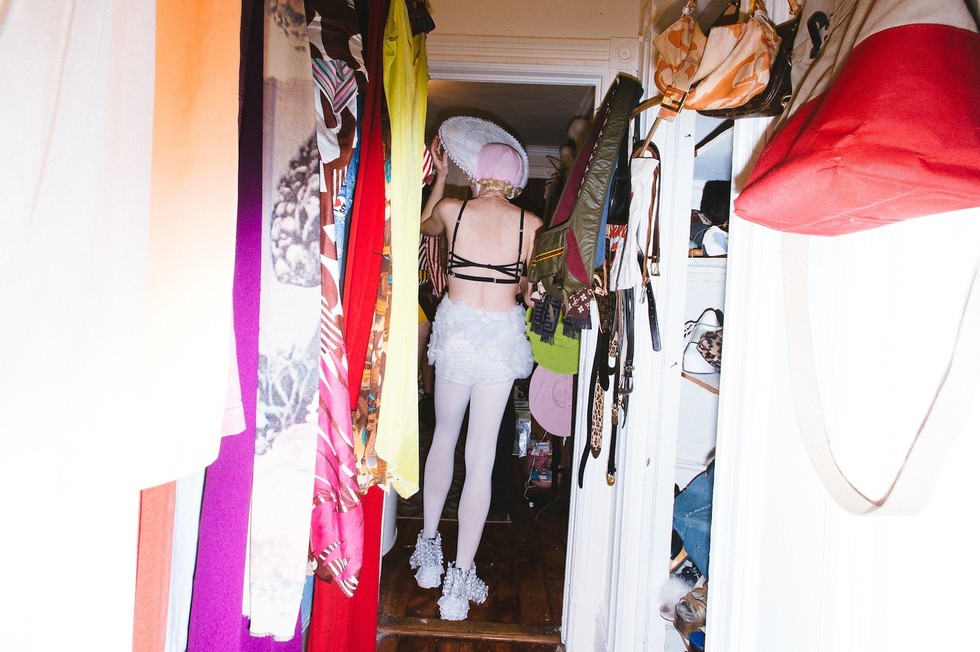 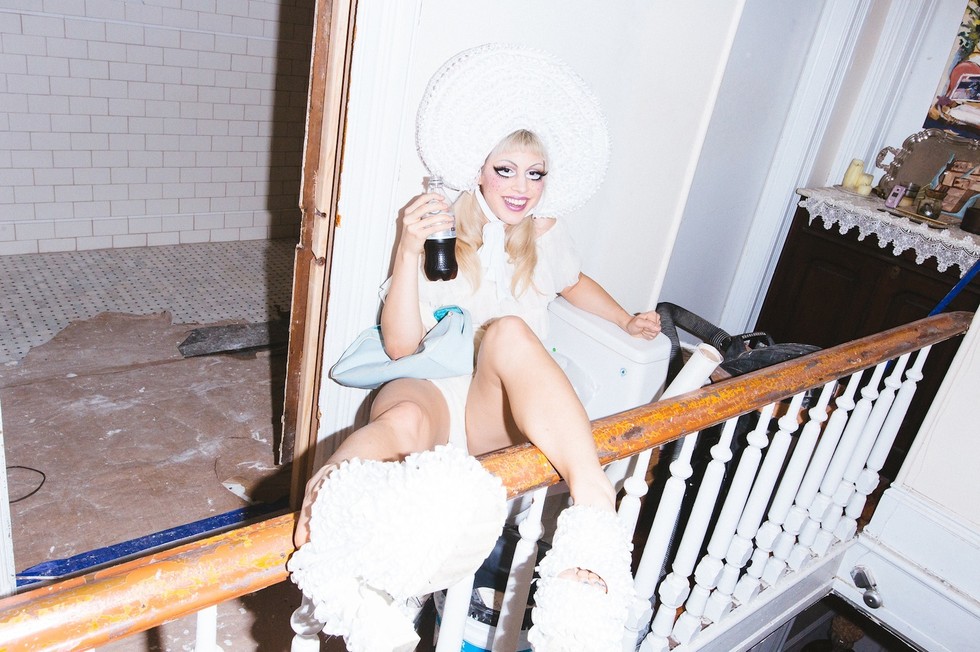 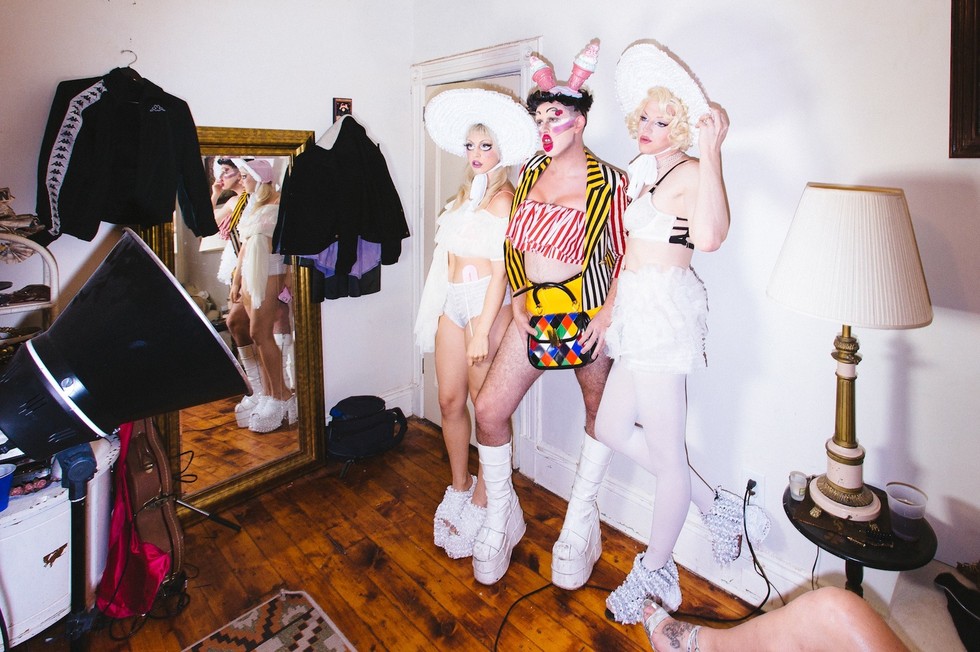 Sateen and Exquisite: "We have a language. We created it a while ago. Everything is just like a word with an '-OOM' on the end of it. Like 'we're going to Holy Mount-OOM.' [It comes] from being on poppers, mainly. It's called ba-BOOM, because that's when you want a popper. You go 'I want a ba-BOOM.'" 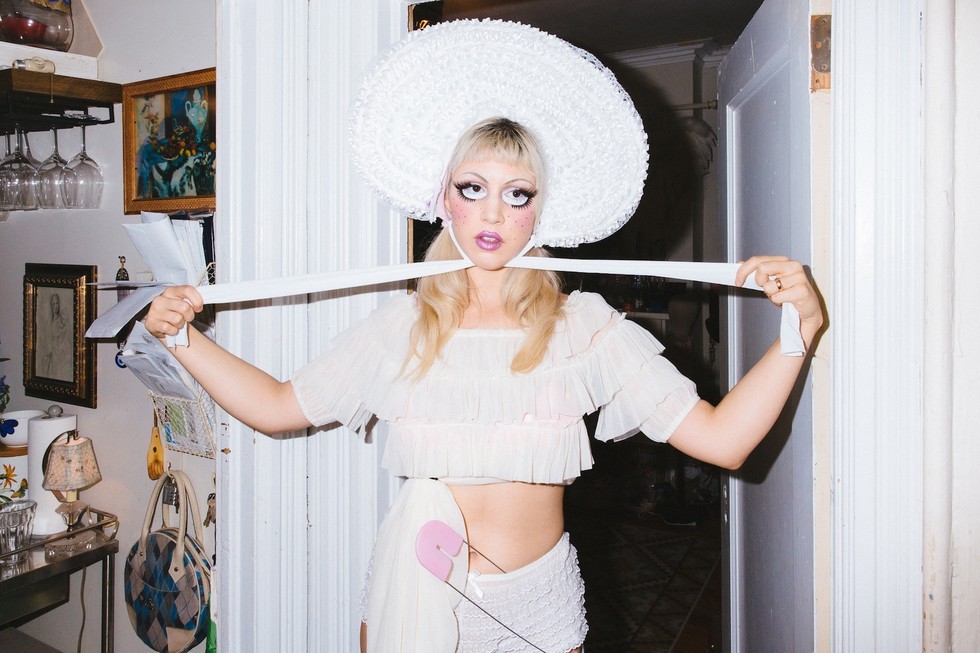 Previous Next
Sateen and Exquisite: "We collect vintage designer clothing -- just what we find at Beacon's Closet. We love fashion, but it's more of an inspiration for what we do -- for our looks. The more we do it, though, the more we're getting into making stuff and customizing stuff. This is like a party-city bonnet – like that's hideous! It had teddy bears all over it! So we're like 'ok, we have to make that cuter.' Throw some ruffles on it!" 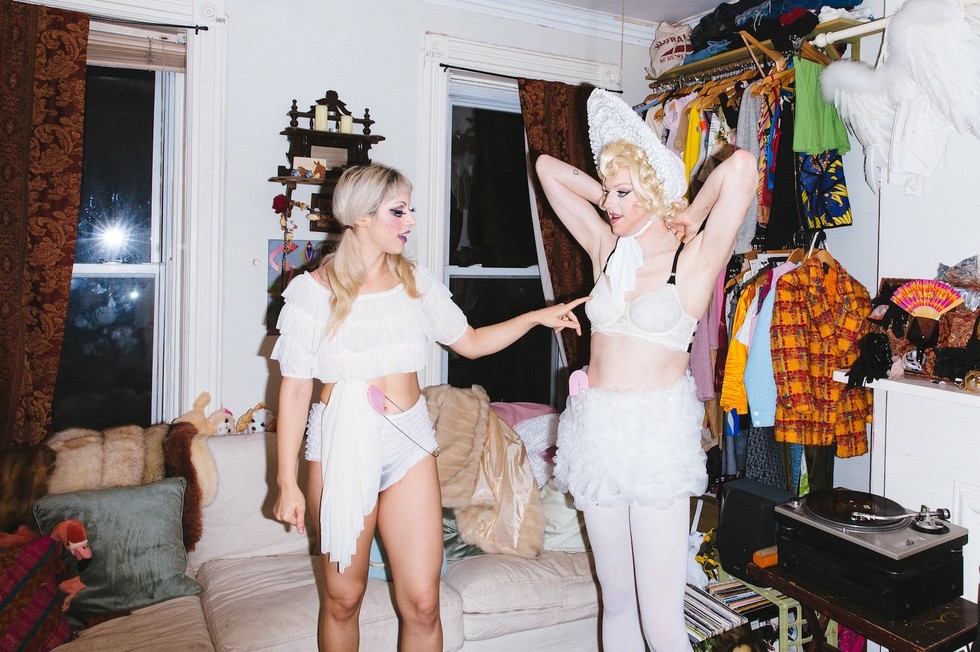 Sateen and Exquisite: "We're like fun wallpaper...That's what we do a lot of the time and that's what we get hired as. You're the decoration. You get hired to sit, or pose, or dance. You're basically a really intense-looking gogo-dancer that's not as sexual." 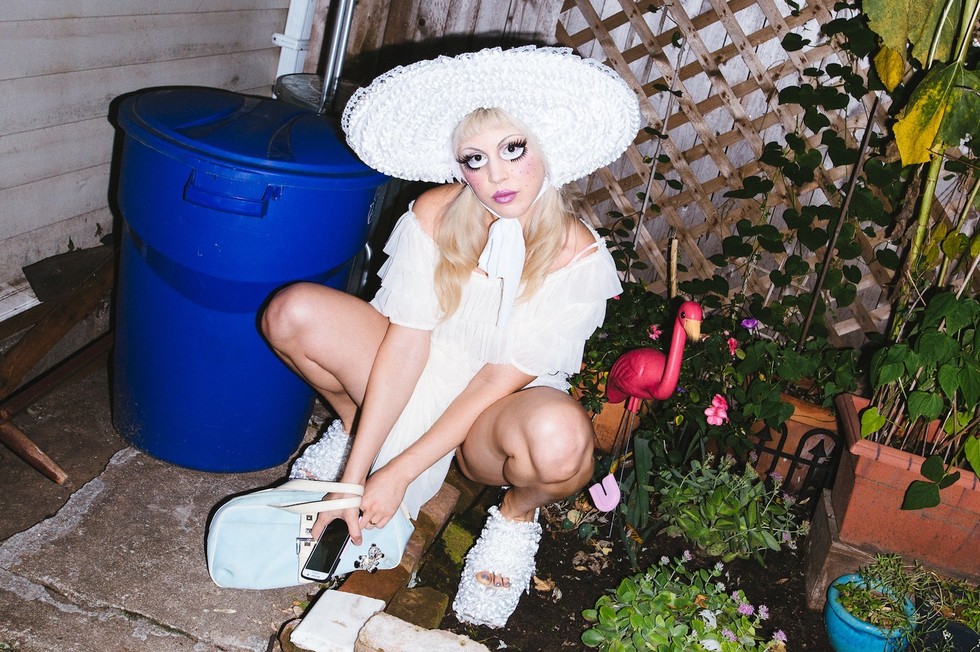 Sateen: "I'm basically wearing some underwear, and some frilly thing we found… I don't even know. And my shoes are hand-made, with Fulton St. fabric store trim, that we hot-glued… They're very poodle-y, or whipped cream, depending on what you're [into]… They'll get the job done." 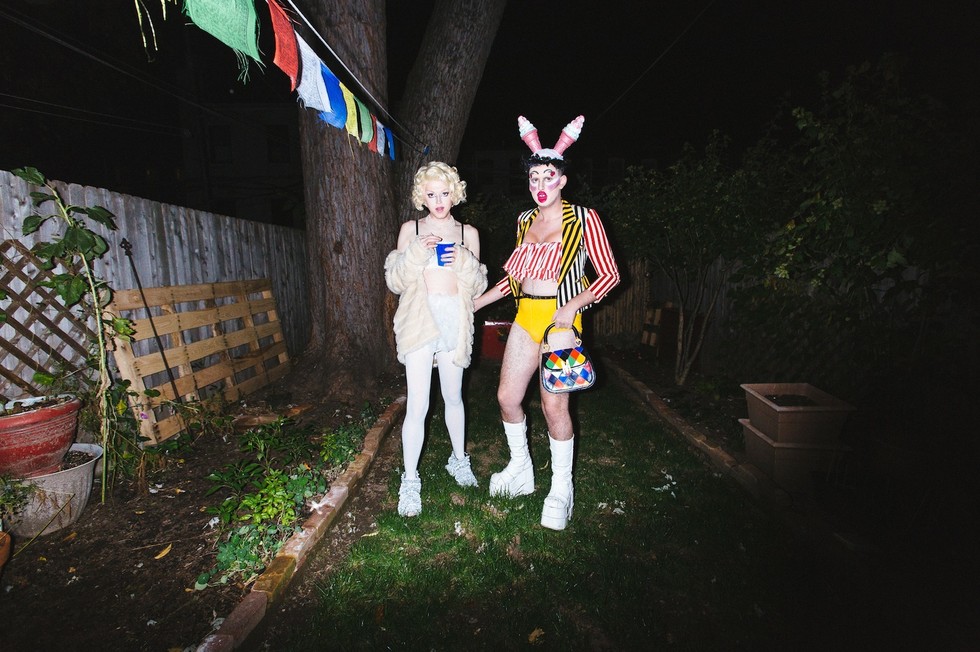 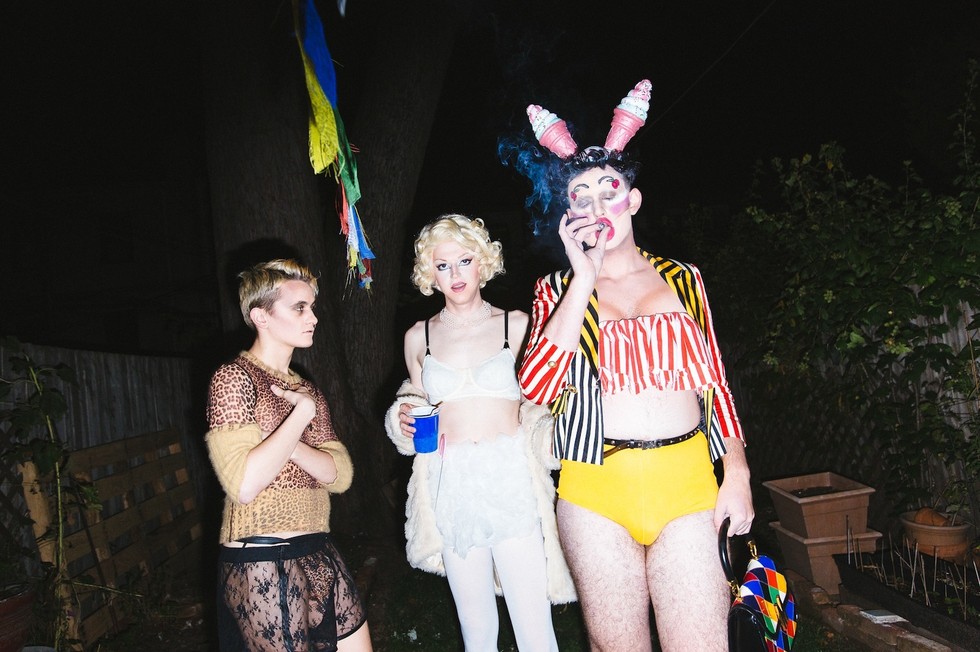 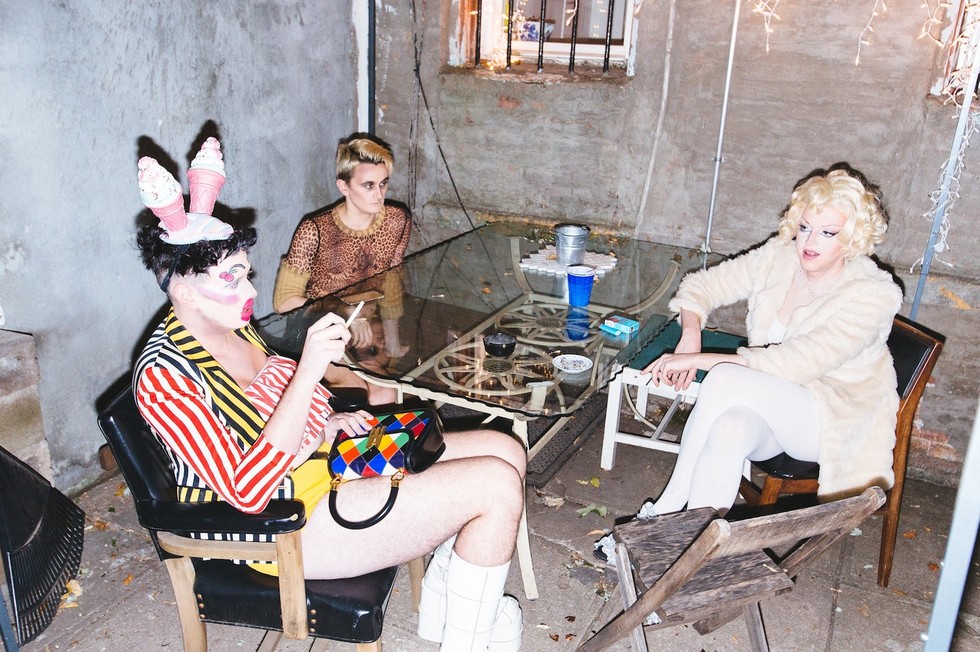 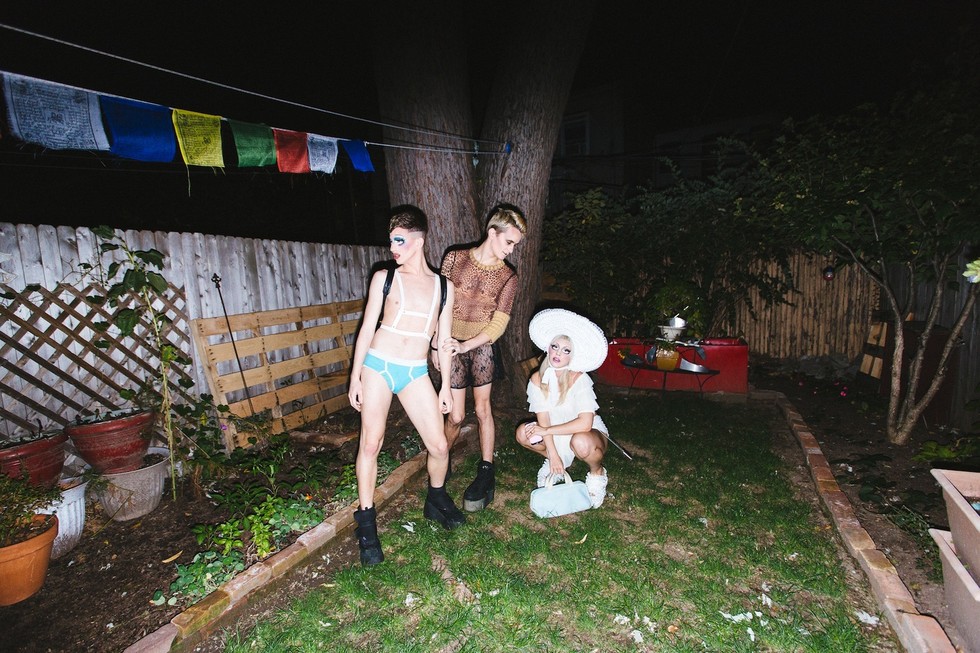 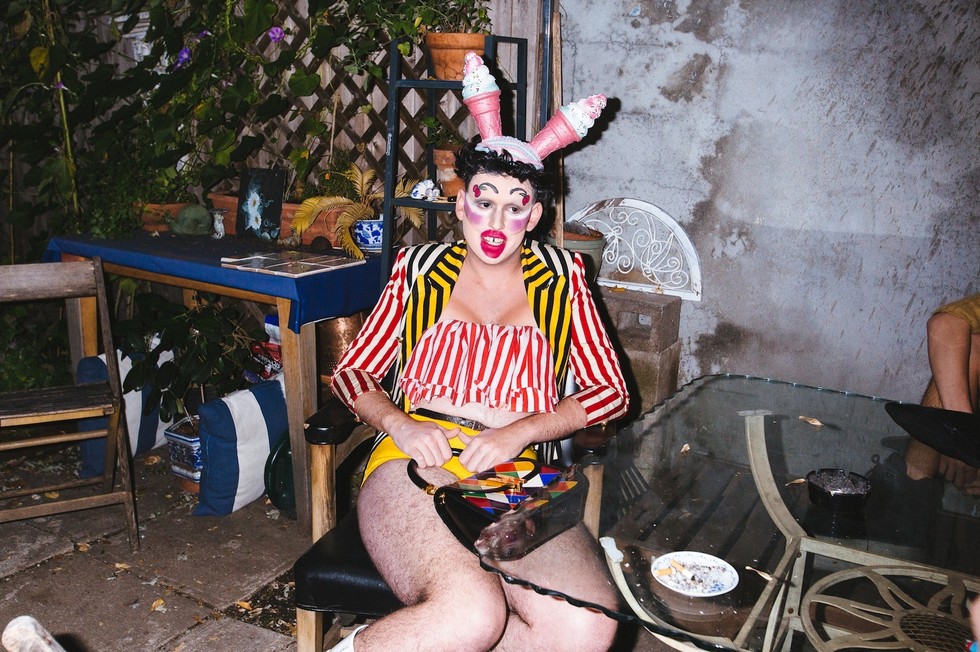 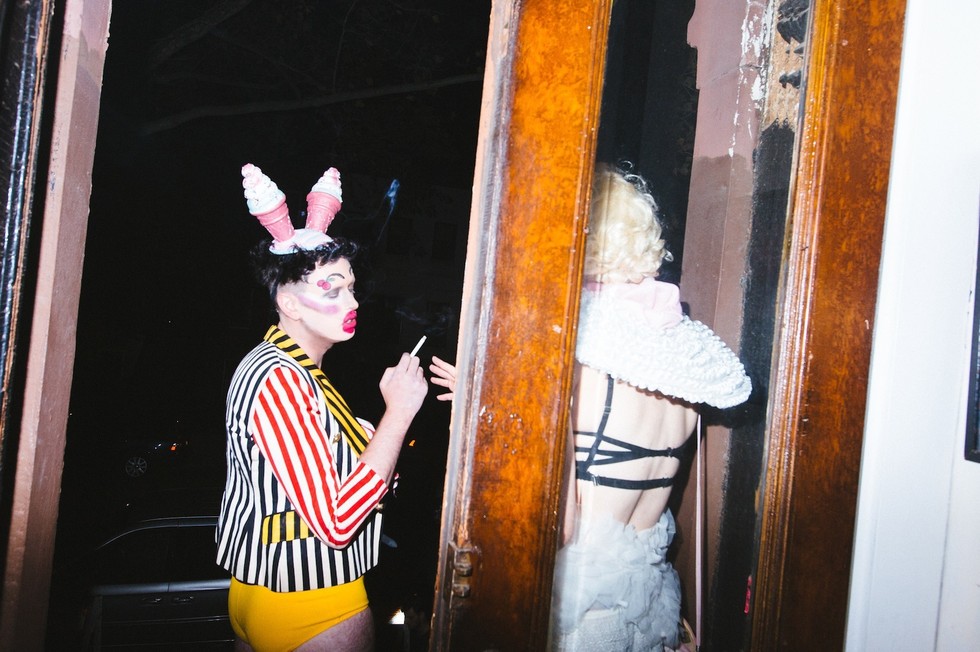 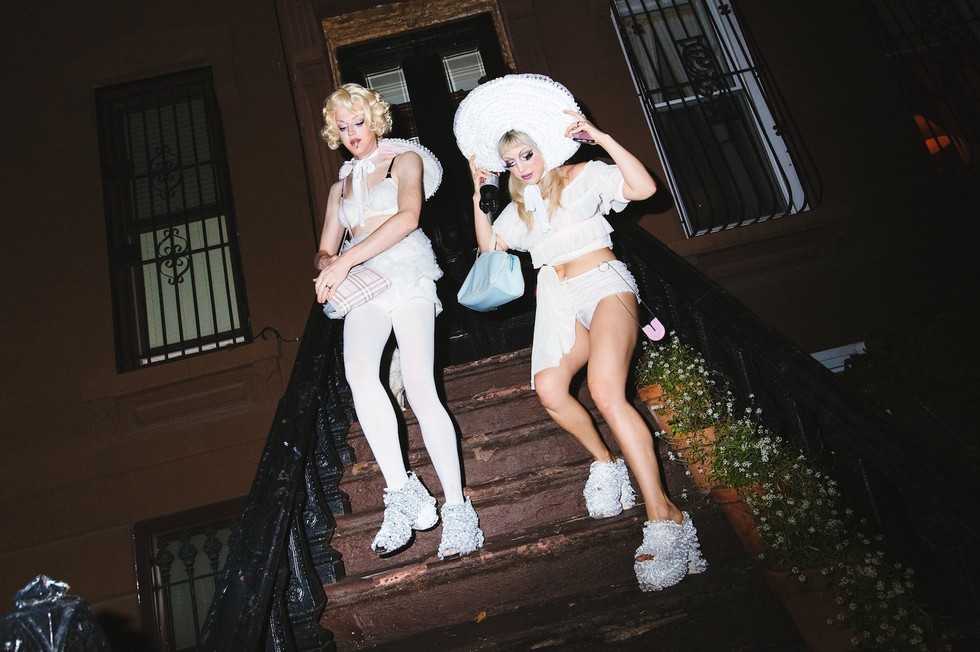 Exquisite: "We painted ourselves blue this one time, with this really intense blue paint, and [Queen Sateen] got roofied. She was literally throwing up, trying to peel this paint off. We didn't get the blue paint off until, like, the evening of the day after the party." 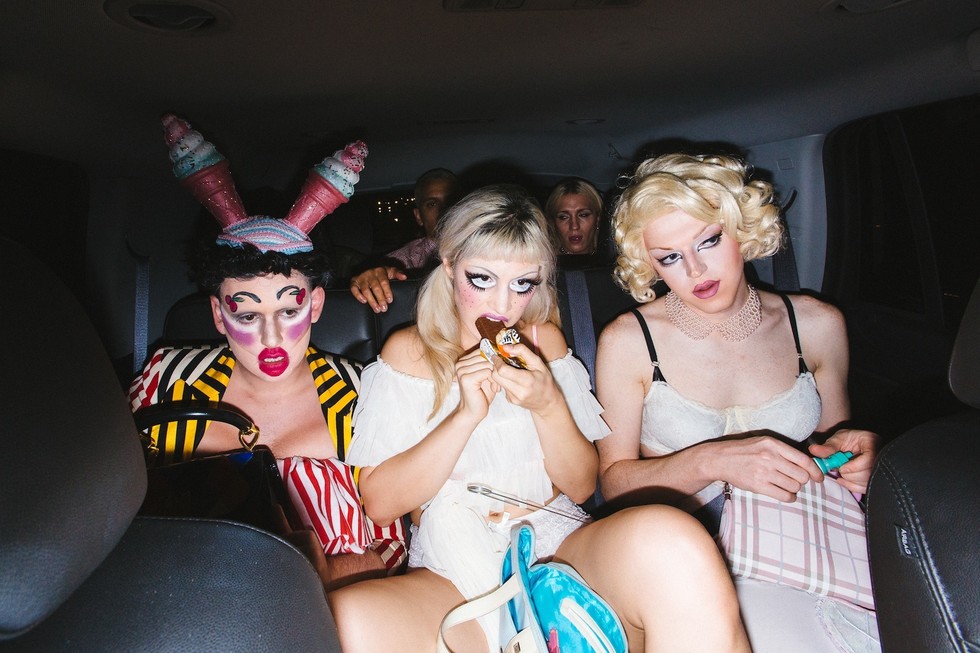 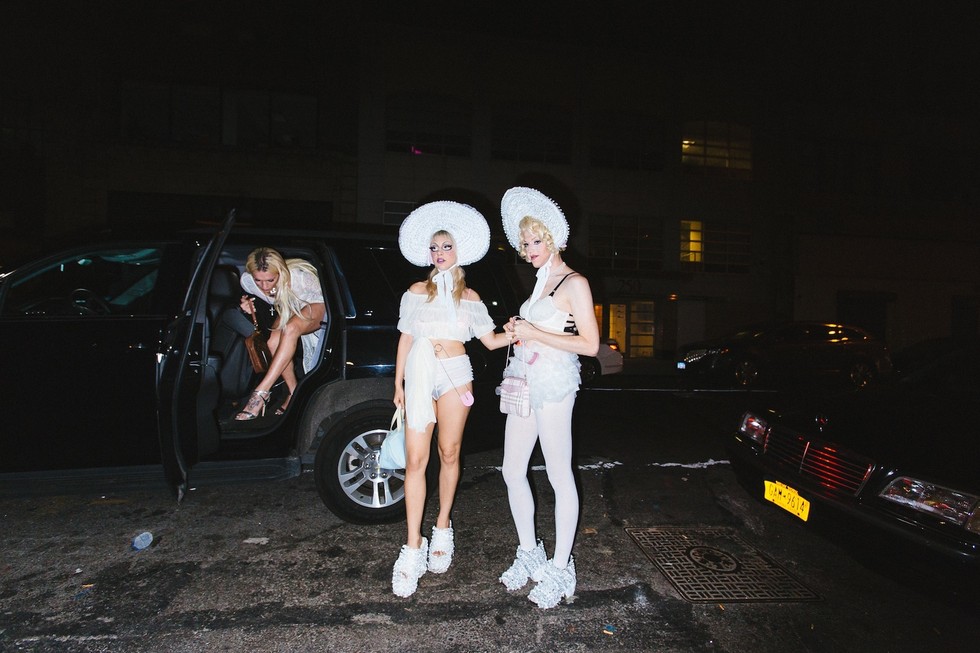 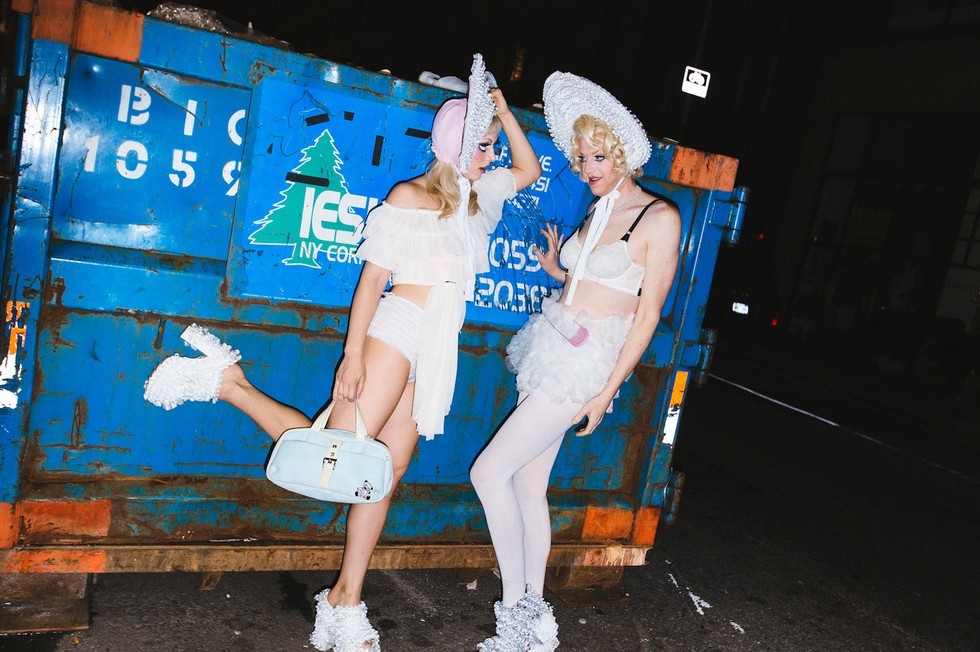 Sateen and Exquisite: "Last Holy Mountain was on a full moon. We saw three people at once outside, with bouncers, and cops, and ambulances. Everything was out there." 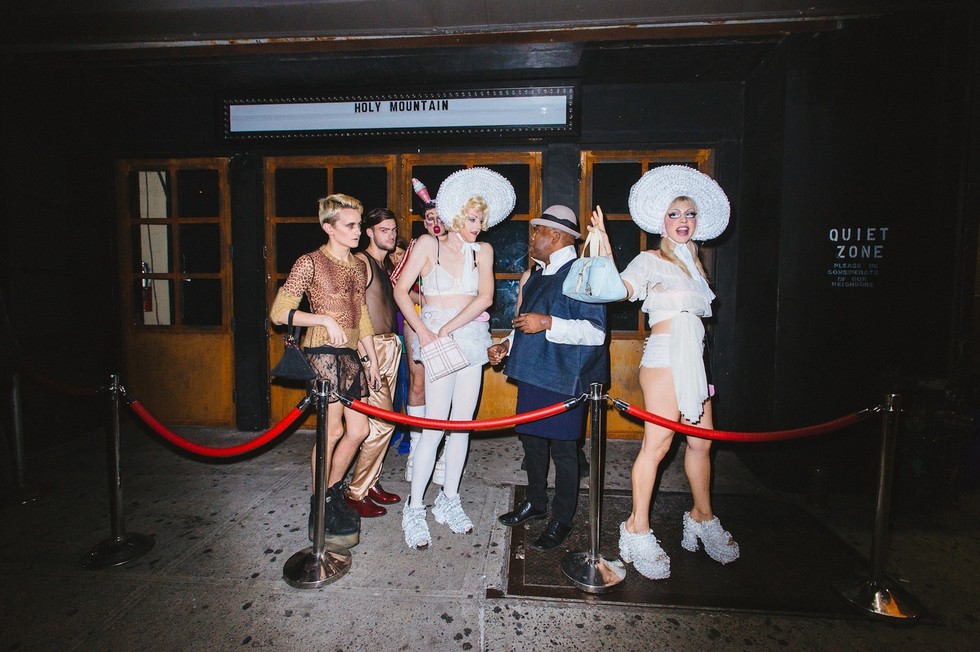 Exquisite: "A lot of good stuff always happens on the way into that party." 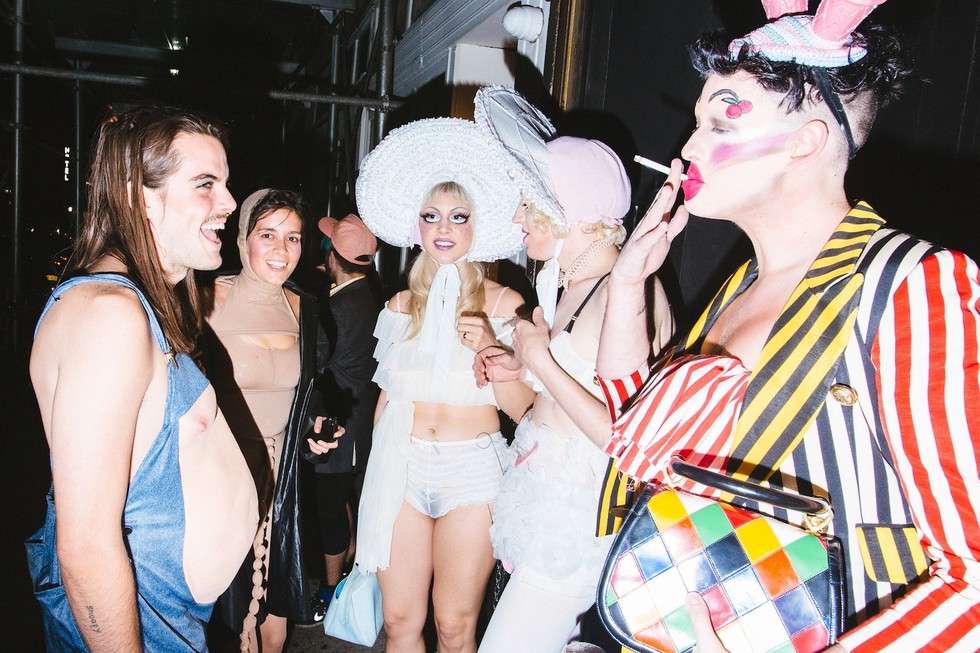 In the backseat of an Uber, the windshield is obscured by two large ice cream cones. Made of Styrofoam and covered in glitter, they belong to club kid Sussi Suss, who wears them on her head like confectionery antennae. Playing funk songs over the car's stereo, she sits next to the stars of the night, Queen Sateen and Exquisite, who in turn dance and sing along to Sylvester's "You Make Me Feel (Mighty Real)":

"IT'S TIME TO LIVE THIS BRAND NEW LIFE, DOING WHAT YOU FELT WAS RIGHT."

But before the scene in the Uber, the night started at The House of Sateen. An unassuming brownstone in Bed Stuy, the home is much more flamboyant on the inside; the walls are covered with both Picasso prints (his Demoiselles) and strap-on angel wings. One room has an impressive clothing rack belonging to Sateen and Exquisite, a real-life married couple who have made names for themselves as some of nightlife's reigning club kid drag queens. "Everything we have here we got at Beacon's closet," Queen Sateen says of their outfits. "It's all, like, Christian Dior, but it's cheap because nobody wants it. It's tacky as fuck."

She's dressed as an age-inappropriate baby, with a bonnet so large it makes her head look like a peacock, and a pink safety pin of equal size clipped around her frilly "diaper." Exquisite is styled similarly, forgoing Queen's ruffled top for a white bra with commanding black straps. Their shoes and bonnets are made custom for the night, with Party City frill and glue.

Besides hosting and promoting parties, the two are also musicians in a band called, appropriately, Sateen; we also learn that Exquisite is an ex-paralegal and a man named Blake. (Sateen, for her part, won't reveal more about her backstory.) Speaking of their transformation from "ordinary" heterosexual couple to drag partners, Sateen says, "We sort of hibernated one winter, and were reading all of RuPaul's books. We also went through all of John Waters' movies and were like 'let's try drag!' The rest is history." They've been doing this for a year and a half now, originally having met on OkCupid (the two first connected as potential music collaborators but, clearly, things progressed from there).

Of the name(s), Sateen tells us that Exquisite "had all these button-up shirts for his job and there was one folded, sitting on his dresser. We looked down -- the tag was sticking out -- and it said '100% sateen.' We were like 'oh my God! That's our name!'" It works, too. With songs like " TREAT YASELF" and "She's FANCY," they create iridescent, poppy funk that sounds just like the fabric would, if it could sing.

Tonight, however, Sateen and Exquisite wear the outfit of party hosts. They leave their musical talent and DJ ability behind in their overflowing wardrobe, along with corsets, tiaras, and platform boots. On the agenda is the one-year anniversary of Ladyfag's wildly popular romp, "Holy Mountain." Preparation includes: whiskey, tequila, a few Fireball shots...oh, and a couple of granola bars, too.

Back in the Uber, we're getting close to the club and voices are rising as the excitement is mounting. Somebody asks if anyone has poppers. The car pulls up, Sateen, Exquisite & Co. get out, take a few photos and then descend into the night -- but not before we were able to document some of the fun. Take a look at photos above.